Now that scientists understand what triggers key steps in the immune response to menacing fungi such as Candida albicans, they hope to develop ways to make it work better.

PROVIDENCE, R.I. [Brown University] — Every year, fungal infections threaten thousands of patients — from those with depressed immune systems to others who have had surgeries or devices such as catheters implanted. Moreover, some anti-fungal medications are beginning to lose their power.

To help protect patients, a team of scientists at Brown University and Rhode Island Hospital has focused on understanding the body’s natural immune response, revealing key details in a new study that could ultimately help to develop new therapies.

“To combat rising fungal infection rates and growing drug resistance, an increased focus on additional ways to enhance the innate immune and anti-fungal response may offer alternative treatments,” wrote the authors of the study in the Journal of Immunology.

The research reveals how three receptors called integrins on the surface of the white blood cells called neutrophils signal the cells to take action against the fungus as it spreads its tendrilous hyphae into infected tissue. 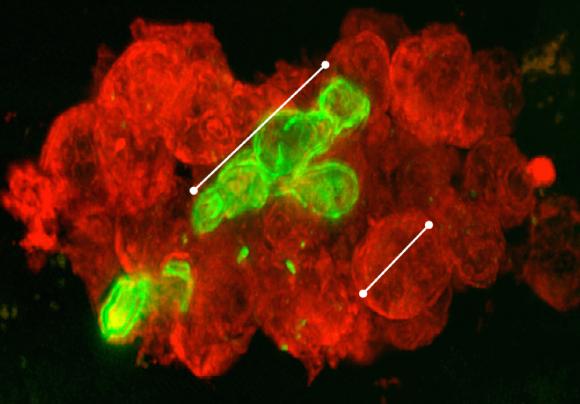 The research team in the Rhode Island Hospital lab of Jonathan Reichner, a research professor of surgery at Brown’s Alpert Medical School, not only observed these specific mechanisms, but also manipulated the integrins in the lab to change the behavior of the neutrophils. That sets the table for studies in which scientists can gauge the clinical effects of doing so to see if they can improve the body’s defenses.

“We are looking for ways to mobilize and activate our neutrophils to eliminate fungal infections, especially hyphal forms of fungal infections,” said Courtney Johnson, a fourth-year medical student who earned her Ph.D. from Brown who co-led the study with Xian O’Brien. “At the same time, by learning more about how neutrophils cluster and what happens in those aggregations, we can also learn when they may be causing damage to tissue.”

How the battle proceeds

The battle between the immune system and the fungus plays out in the extracellular matrix — the area of tissues that lies between cells. There, patrolling neutrophils from the bloodstream sense the presence of beta-glucan, a part of the fungal cell wall.

Too small in comparison to the fungal hyphae to swallow them up, as they might a bacterium, the neutrophils attack instead in two phases. As neutrophils arrive, they react by spewing a NET — neutrophil extracellular trap — of sticky DNA strands on to the fungus to contain it. Then they cluster together and move en masse. 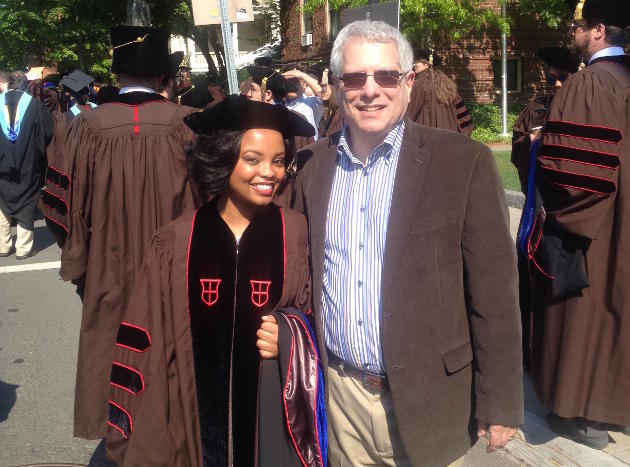 A successful thesis. Johnson and Reichner at Commencement 2015. The research was part of Johnson’s doctoral thesis. Image courtesy Courtney Johnson

In a previous study, Reichner’s team found that this attack depends on an integrin called CR3. In the new study, the scientists dug deeper to understand the chain of events more fully. Another integrin called VLA5 is necessary for triggering the Spiderman-like spewing of sticky DNA NETs. After that happens, CR3 then shuts down VLA5 and triggers a third integrin, VLA3, to signal neutrophils to cluster into their little hunting packs.

“We knew that they aggregated, and we knew that they release NETs, but what Courtney and Xian figured out is that there are specific integrin receptors on the surface of the neutrophil that mediate the aggregation and mediate the netosis,” Reichner said.

At each stage in their research, which used the fungus Candida albicans and cells from human blood samples, the team tracked each integrin’s activity level and used antibodies to shut them off to see what difference that made. For instance, they could see that VLA3’s activation and VLA5’s suppression depends on CR3, making CR3 the immune response’s “master regulator.” They could also see that if they shut off VLA5, there were no NETs. If they shut down CR3 or VLA3, there was no clustering.

The work was at times painstaking. Johnson, for example, spent months adapting an assay to track VLA3 activation because one didn’t exist previously. The study is a main outcome of her doctoral thesis work, which she completed in 2015.

Though the researchers now understand how the immune response occurs and have demonstrated ways to manipulate it, they don’t yet know whether the response helps, as Johnson noted, or actually does more damage, as happens in many autoimmune diseases such as rheumatoid arthritis. It might even be a mixed bag, she said, in that the NETs may help but the clustering may hurt, or vice versa.

That’s one of the things the lab would like to investigate in mice. Either way, the new ability Reichner’s team has gained to manipulate the response means he can test ways to either augment or restrain it. Ultimately, if they discover ways to improve the response, he said, that could lead to therapies that can help people infected with fungal pathogens.