Filling in the Nuclear Data Gaps

Nuclear science, a field focused on what’s at work in the center of atoms, brought us a powerful energy source and new medical treatments and imaging tools.

And the U.S. Department of Energy’s national laboratories have for decades contributed basic nuclear science results and other data on nuclear reactions and nuclear structure to support these and other applications, such as the management of our nuclear weapons stockpile.

Now, to help fill some important knowledge gaps and settle disagreements between experiments and models, the DOE’s Lawrence Berkeley National Laboratory (Berkeley Lab) is ramping up its efforts to solve common problems for a broad group of stakeholders in the nuclear energy, security, and medical fields.

In June, Berkeley Lab managers brought aboard Lee Bernstein—a nuclear physicist who has been involved in national efforts to guide the focus and effectiveness of the U.S. Nuclear Data Program—to lead the renewed Nuclear Data Group. 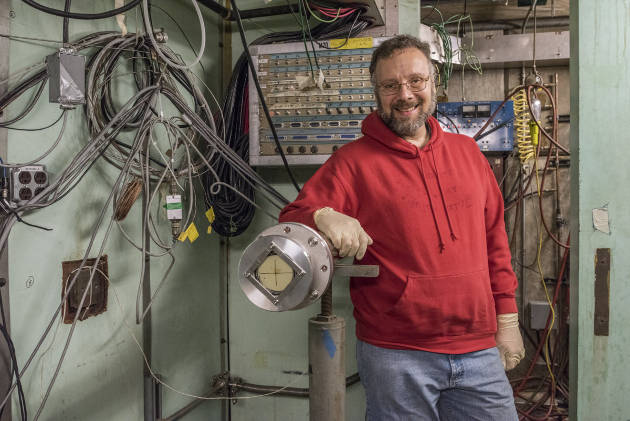 With the availability of precise measurement tools, powerful computer simulations, and a coordinated plan for new experiments, scientists are better equipped than ever to answer some of the most pressing questions in nuclear science. This renewed effort, Bernstein says, could boost fusion energy and nuclear medicine R&D, aid nuclear materials detection and nuclear weapons counterproliferation efforts, and lead to improvements in nuclear power generation.

Bernstein, who during the early ’90s had conducted experiments at Berkeley Lab’s particle-accelerating 88-Inch Cyclotron as a postdoctoral researcher at Rutgers University, spent the previous 22 years as a staff scientist at Lawrence Livermore National Laboratory (Livermore Lab).

He developed a nuclear science program at Livermore Lab’s National Ignition Facility (NIF), a powerful laser that is used to help ensure the reliability of the nation’s nuclear weapons stockpile. In 2013, he began teaching nuclear physics courses at UC Berkeley’s Department of Nuclear Engineering.

“The Nuclear Data Group is now going beyond the traditional assembly, assessment, and dissemination of nuclear data to include a vibrant experimental effort to address data priorities for the various nuclear agencies and those they serve,” says Barbara Jacak, who leads Berkeley Lab’s Nuclear Science Division.

“Surprisingly, this is the first time that such a coherent experimental effort is being made,” she adds. “Some of the wonderful advantages of Lee’s group include access to the Lab’s 88-Inch Cyclotron, an ideal accelerator facility to perform measurements; active local groups willing to collaborate; and many excellent students wanting to get involved thanks to the strong links with the UC Berkeley campus.”

Berkeley Lab’s new Nuclear Data Group effort benefits greatly from Berkeley Lab’s connection to UC Berkeley’s Nuclear Engineering Department, Bernstein says. His career path, he notes, has taken him full circle, as he is again conducting nuclear physics experiments at the 88-Inch Cyclotron. Only now the experiments are for a different purpose.

The models that have been developed to describe nuclear processes—such as the intricate details of the fission reactions that release energy in nuclear reactors as atomic nuclei are split to form lighter elements—can be improved upon thanks to advances in tools and techniques, and a new round of experiments at Berkeley Lab will help to provide more precise measurements.

“Our role in the U.S. Nuclear Data Program was to compile, evaluate, and archive data. We were judges and librarians,” Bernstein says. “We now do measurements, which is a new aspect: Where we see the deficiencies, we measure.” These new measurements are used to validate, in part, and improve upon past experiments, theory, and simulations.

Bernstein also leads the Data Evaluation for the Applied Nuclear Science (DEANS) project at UC Berkeley, which is part of the U.S. Nuclear Data Program. That and the International Atomic Energy Agency (IAEA) are among the world’s custodians for unclassified nuclear data.

In April 2017, Berkeley Lab will host a meeting of the IAEA’s Nuclear Structure and Decay Data (NSDD) Network, a governing body that sets the standards for evaluating the structure of atomic nuclei. “Inviting us to hold the NSDD meeting in Berkeley is a recognition of the new role of the Lab and campus in the international nuclear data community,” says Bernstein.

Bernstein also serves as a member of the leadership team for the Nuclear Science and Security Consortium, a group of national labs and universities that has a mission to train the next generation of experts for nuclear security and related fields.

Generally, nuclear data is focused on “the properties of nuclei and the reactions that make them and that produce energy and medical isotopes,” Bernstein says. “All of this data, all of this information is completely open and unclassified,” he says. “But even though everybody shares and uses this nuclear data, there has really not been a concerted, multi-agency effort to try to address these needs” for improved data, he says. Until now.

A workshop held at Berkeley Lab in May 2015 and a related white paper outlined the highest-priority needs for nuclear data that were common to a collection of agencies, and that report is now driving some of the latest work in the nuclear data field, Bernstein says.

“Who owns fission physics? Everyone owns it,” he explains, from the nuclear power industry to the counterproliferation community, and from the scientists who must ensure the safety of the nation’s nuclear weapons to the medical community that uses radioactive isotopes for treatment, imaging, and diagnosis.

Berkeley Lab’s 88-Inch Cyclotron has provided a good platform for the new program in nuclear data measurements, Bernstein says, adding that he enjoys working with several UC Berkeley undergraduate and graduate students who journey up to the cyclotron to assist with the experiments.

“For these students, what a treat,” he says, noting that their classrooms on campus are just 800 meters from the cyclotron. “They have world-class capabilities here, and can go right back down and have classes there. The vast majority of my work is here (at the cyclotron) as well.”

Even before he joined Berkeley Lab, Bernstein had been conducting some research at the cyclotron to support his work developing new detectors for use at Livermore Lab’s NIF laser. He conducted that work and other cyclotron research at Berkeley Lab as part of a national labs and UC Berkeley research consortium known as BANG, the Bay Area Neutron Group.

“This place has always been welcoming to us,” Bernstein says of Berkeley Lab’s 88-Inch Cyclotron. “The staff are innovative, they’re clever, and a lot of this research sits on both sides: from practical applications to basic science.”

Bernstein says that Rick Firestone, a longtime staff scientist at Berkeley Lab and a mentor, had convinced him to think about joining Berkeley Lab full time.

“When Rick told me he was retiring, I said, ‘Wow, here’s a great opportunity to do something between these two worlds (basic science and applications) and have nuclear data at the core,’” Bernstein says.

Now, Bernstein says he enjoys mentoring students who may pursue careers in nuclear science and engineering.

“I get to see all of the best and brightest students,” he says. “A large amount of my time is spent teaching and mentoring students. I think this is a very special place to be—it is so completely intertwined with campus.”

Nuclear science research at Berkeley Lab is support by the Department of Energy’s Office of Science.