EAST LANSING, Mich. — Antibiotics in pig feed increased the number of antibiotic resistant genes in gastrointestinal microbes in pigs, according to a study conducted by Michigan State University and the U.S. Department of Agriculture’s Agricultural Research Service.

Published in the current edition of the Proceedings of the National Academy of Sciences, the comprehensive study focused on understanding the effects of conventional, in-feed antibiotics in U.S. farms. 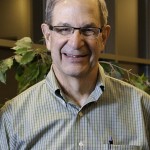 Jim Tiedje, University Distinguished professor of microbiology and molecular genetics, is the co-author of a comprehensive study on antibiotics use in pig feed. Photo by Kurt Stepnitz

For decades, many producers of pigs, chickens and other farm animals have used antibiotics not only to protect their livestock from disease, but also to boost growth rates and enhance feed efficiency, a measure of how well animals convert feed into weight gains.

Scientists don’t know precisely how antibiotics enhance growth rates and feed efficiency, but they are concerned that on-farm use of these medications may contribute to the development of strains of microbes resistant to conventional antibiotics, which are potentially harmful to humans and animals, said James Tiedje, MSU University Distinguished Professor of microbiology and molecular genetics and of crop and soil sciences.

“The growth of antibiotic resistance in pathogens is a huge challenge for society around the world,” said Tiedje, an MSU AgBioResearch scientist. “Studies to understand what contributes to the spread and what interventions can help control the problem are vital.” 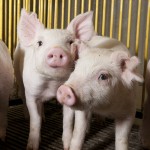 “To our knowledge, this study is the first of its kind to look at the collateral impacts of in-feed antibiotic use in farm animals, using a comprehensive approach to detect shifts in the function and the makeup or membership of the microbial community in the model animal’s gastrointestinal tract,” said Torey Looft, USDA researcher.

Funding was provided by MSU’s Environmental Science and Policy Program initiative on Pharmaceuticals in the Environment, ARS and the National Institutes of Health and through the Alliance for the Prudent Use of Antibiotics program on Reservoirs of Antibiotic Resistance.