Humans aren’t the only species with a sweet tooth. Research from North Carolina State University shows that the invasive spotted-wing vinegar fly (Drosophila suzukii) also prefers sweet, soft fruit – giving us new insight into a species that has spread across the United States over the past four years and threatens to cause hundreds of millions of dollars in damage to U.S. fruit crops.

“Because we know that D. suzukii prefers softer, sweeter fruit, we can focus our research efforts into which wild fruits may serve as reservoirs for this species and help identify new crops that might be at risk,” says Dr. Hannah Burrack, an assistant professor of entomology at NC State and lead author of a paper on the research. “These findings may also be a starting point for plant breeders interested in developing new fruit varieties that are more resistant to D. suzukii.” 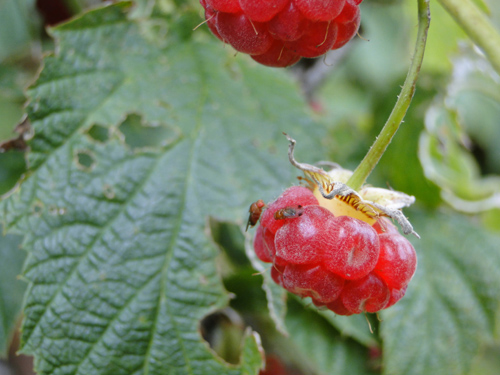 Originally from east Asia, D. suzukii were first detected in California in 2008. They have since spread to states from Wisconsin to North Carolina to Florida. The female flies use serrated blades on the tip of their abdomens to cut through the skin of ripe fruit and lay their eggs. The eggs hatch into larvae that feed on the flesh of the fruit until they reach maturity – ruining the fruit in the process.

Sellers go to great pains to remove infested fruit before it reaches the marketplace, so consumers won’t notice a difference in fruit quality. But infestations can cause significant economic problems for fruit growers. For example, researchers estimate that D. suzukii has the potential to destroy 40 percent of blackberry and raspberry crops in the eastern U.S., which would affect berry prices and availability.

While ongoing studies explore pesticide-based approaches to control D. suzukii, the new research from NC State should help scientists and farmers with other control options. 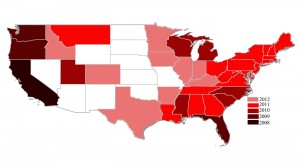 The paper, “Variation in selection and utilization of host crops in the field and laboratory by Drosophila suzukii Matsumara (Diptera: Drosophilidae), an invasive frugivore,” was published online March 14 in Pest Management Science. Co-authors are Dr. Gina Fernandez, a professor of horticultural science at NC State; Taylor Spivey, an undergraduate at Brevard College; and Dylan Kraus, an undergraduate at NC State.