A Michigan State University study has found that too much of a hormone commonly used during in vitro fertility, or IVF, treatments actually decreases a woman’s chances of having a baby.

The research, recently published in the journal Fertility and Sterility, is the largest study to analyze more than 650,000 IVF cycles in women nationwide.

James Ireland, an MSU professor in reproductive physiology and one of the co-authors of the study, has concluded that as the total dose of the hormone known as follicle stimulating hormone, or FSH, went up, the live birth rate went down. This finding supports other smaller studies and reverses the traditional thought that the more FSH given during treatment, the better probability of a woman conceiving. 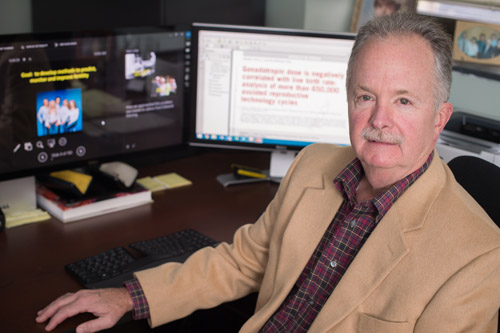 James Ireland, an MSU professor in reproductive physiology, has found that too much of a hormone commonly used in in-vitro fertility, or IVF, treatments actually decreases a woman’s chances of having a baby. Photo Credit: G.L. Kohuth

FSH is produced by the pituitary gland. The hormone controls the ovaries in women and testes in men and is essential for reproduction. Doctors use FSH to stimulate as many follicles as possible in a woman’s ovaries to grow, so a large number of eggs can be recovered for IVF.

“The study answers the question of whether or not more FSH is detrimental to the survival of the embryo,” Ireland said. “As the dosage of FSH increased, live birth rates decreased by as much as 15 to 20 percent.”

In addition, the research team found that this decline still occurred regardless of age, health, weight of the patient or length of treatment.

“Our driving force for this research was not only to investigate whether high doses of FSH could impact embryo survival, but to also develop markers in future studies for clinicians to use and determine when an FSH dosage becomes too much,” Ireland said. “Ultimately, they may want to know how to avoid higher amounts of the hormone.”

Ireland conducted the research with co-author Valerie Baker, an infertility specialist from Stanford University. MSU researchers Barbara Luke, a professor of obstetrics and gynecology, and George Smith, a professor in animal sciences, also contributed to the study, as well as Morton Brown, a University of Michigan biostatistics professor.