Student Spotlight: With the greatest of ease, Gracie White flies through the air

Yale junior Gracie White starts to feel a little bit ungrounded when she’s not spent much time up in the air.

Being too stuck on the ground, she says, even causes to her to experience a bit of an “identity crisis.”

Lately, she’s been missing the swinging trapeze, which — during her high school years — was one of her main acts as an aerial circus performer with Circus Juventas in St. Paul, Minnesota. But she’s grateful for the opportunities that she has on campus and at nearby sites to fly through the air on the aerial hoop (also called the lyra) and do circus acrobatics while hanging onto, or suspended from, colorful pieces of fabric (also called aerial silks). A member of Yaledancers, she has introduced some circus acrobatic moves into her performances with that troupe, and she is now coaching others in circus arts at two New Haven venues.

YaleNews recently spoke with the aerialist about her love of the circus arts and the ways she has managed to maintain some measure of a circus life at Yale. Here is what we learned.

Discovering her niche: Growing up in Minnesota, White had tried virtually every traditional sport available and realized, with each one, that it was not a good fit. “I was just bad, really bad,” she laughs. “I hated all of them.”

Then she tried figure skating, which was a little better for her than the others, until it started to feel too competitive. “I’ve never had a drive to win something,” says White. “That’s not my style.”

Around the age of 11, she attended a weeklong summer camp hosted by Circus Juventas, a performing arts youth circus school.

“Oh my goodness, it was the most fun thing I’ve ever done!” she says of the experience. “I knew right away that [circus arts] is what I wanted to do.”

Even a broken collarbone on the last day of camp did not deter White, whose parents tried to convince her to try yet another activity. “I said, ‘Oh no, wait a minute,’” recalls the Yale student. “I was young, so the break healed quickly, and I went back to learn more. I’ve been performing circus acts ever since.” 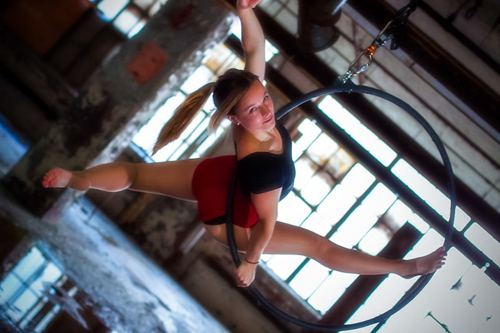 Higher and higher: White says that her training in ice skating made her both flexible and in tune with her body, so she advanced quickly in her classes at Circus Juventas. She started on a static trapeze, then moved on to the triple trapeze, aerial silks, Spanish web (a vertical rope covered by fabric), and the swinging trapeze, as well as acrobatics that included hand-to-hand partner work and teeterboard (a seesaw which propels performers into the air one at a time).

Only 5-feet-and-2-inches tall, the young circus trainee was fearless, and her Circus Juventas instructors began inviting her to take their classes and perform in their circus shows.

“I was a shy child who had a lot of food allergies and was kind of timid in the outside world,” remembers White. “Then the circus happened, and I was cured of my shyness.”

White trained every day after school from 3:30 to 9:30 p.m., and had to make arrangements with her schoolteachers to do all her homework on the weekends. “Circus training was pretty much my life,” she says. “I had no social life other than at Circus Juventas.”

Out in the spotlight: Every August, White performed in Circus Juventas shows that drew some 20,000 spectators each year (every show was sold out). She was also hired to travel with Circus Juventas to the Chattanooga River Festival in Tennessee. She loved the experience.

“The circus is very collaborative and creative,” White says. “A lot of circus is making up your own tricks. You spend a training session playing around on an apparatus and say, ‘This looks cool, let’s try this! What if you put your leg there and I put my arm there’ and then — bam! It looks awesome! It’s just so much fun.”

She also felt a special camaraderie with her teachers and fellow performers.

“We had incredible coaches, mainly from China, Mongolia, and Russia,” she says. “A lot of them had traveled with Cirque de Soleil, the Mongolian State Circus, or other big circus troupes. They just pushed us to be better.  I felt at home with the people; everyone was a little quirky, so I fit in there better than I did in my high school.”

A reconsidering: White initially had no plans to go to college after high school. Instead, she had hoped to further her professional training at the highly competitive Ecole Nationale de Cirque in Montreal, the largest circus school devoted to advanced training. Annually, some 500 people apply for as few as 15 spots in the school, according to White.

“I made it through the first round of cuts and passed all their physical tests,” says the Yale student, “but I failed the acting section. I simply was not adequately prepared for it. My audition was the hardest three days of my life.”

While disappointed, White says she never really expected to be selected on her first try. Nevertheless, she started to reconsider her future while in Montreal, and going to college seemed a sensible route.

“I had always really liked school: learning, reading, having good conversations with people. And the circus is incredibly hard on your body. My body was already starting to feel not very happy with me because of all the wear and tear. I like to joke that Snap, Crackle, and Pop live in my joints.”

With and without time in the air: While she was applying to colleges, White was asked to play Snow White in a production of the experimental New York City dance company Company XIV. The role allowed White to do some of her own choreography, and she incorporated some aerial lyra and hand-to-hand acrobatics into the show.

After the production, she spent some months studying in a program at Oxford University, where she had no opportunity to continue her circus training. “It was a difficult few months,” says White. “I would stretch in my room a lot, do handstands. I got into yoga to keep my body moving in ways I was familiar with, but it was definitely an identity crisis.”

Making a circus life: White choose to attend Yale, which has no circus club, over a school that does, because she felt it was the place where she would make good friends — something she had sacrificed in high school for the circus.

She quickly found a classmate, Aleena Glinski, who has circus experience, and joined Yaledancers as a way to keep her body moving.

“Modern dance is the closest in body movement to the circus,” explains White, who is now co-president of Yaledancers.

In her freshman year, she gained some notoriety on campus for her Yaledancers duet “Never Say Goodbye” with fellow junior Christian Probst. A video of the duet produced by Yale’s Office of Public Affairs & Communications went viral.

“In that duet and in other works I’ve done for Yaledancers, I’ve been able to sneak in some acrobatics,” says White. This includes lyra and silk routines in Yaledancers performances at the local Educational Center for the Arts.

Making strides: White says it would be ideal to have both a circus club and a practice space on campus, but recognizes that issues such as rigging and liability make that wish a complex process in the university setting. She has been discussing issues of safety with Yale administrators and says she is “immensely grateful” for the support she has received from Susan Cahan, dean of the arts, Justin DeLand and Kate Krier in the office of Undergraduate Production, and others, who have assisted with her on- and off-campus performances that involve special rigging, among other forms of support.

“I would not have had the opportunities I’ve had without them,” says White.

“The circus arts are growing in New Haven, and I’m incredibly lucky that these two studios popped up when they did,” says White. “It allows me to still keep the circus in my life.”

Flying into the future: Being in the air, White says, is a pure adrenaline rush for her, especially during “moments of free fall.”

“It’s very powerful,” she says. “You’re pumping the swing on a swinging trapeze, pushing up momentum all by yourself, and then jump off and release. The momentum flings you, and then you’re back on the bar again. It’s very satisfying — the closest thing to flying I know.”

An environmental studies major, the Yale junior says she is equally interested in the conservation of sea creatures and thinks a lot about sustainable fishing. That interest dates back to her childhood, when she used to spend hours playing in tide pools on family trips to her parents’ native Scotland. She currently serves on the Office of Sustainability’s Energy Squad, a team of the student-led Sustainability Service Corps, which is working toward making Yale more energy-efficient.

White says she may study environmental issues more deeply in graduate school, but she also has an interest in choreography and artistic direction. She has taken some undergraduate theater courses and thinks being an artistic director of a circus troupe is also an “exciting” prospect.

In the meantime, she is planning her third duet with Probst. She was thrilled to discover last summer that four new members of Yale’s freshman class have some background in the circus arts.

“I took them all out for coffee, and told them about the progress being made on campus in bringing a little bit of circus here,” says White. “Things are moving.”