The impact decimated slow-growing evergreens and made way for fast-growing, deciduous plants, UA researchers say, and that provides an explanation for those fall colors.

The meteorite impact that spelled doom for the dinosaurs 66 million years ago decimated the evergreens among the flowering plants to a much greater extent than their deciduous peers, according to a study led by UA researchers. The results are published in the journal PLoS Biology.

Applying biomechanical formulas to a treasure trove of thousands of fossilized leaves of angiosperms  — flowering plants excluding conifers — the team was able to reconstruct the ecology of a diverse plant community thriving during a 2.2 million-year period spanning the cataclysmic impact event, believed to have wiped out more than half of plant species living at the time.

The researchers found evidence that after the event, fast-growing, deciduous angiosperms had replaced their slow-growing, evergreen peers to a large extent. Living examples of evergreen angiosperms, such as holly and ivy, tend to prefer shade, don’t grow very fast and sport dark-colored leaves. 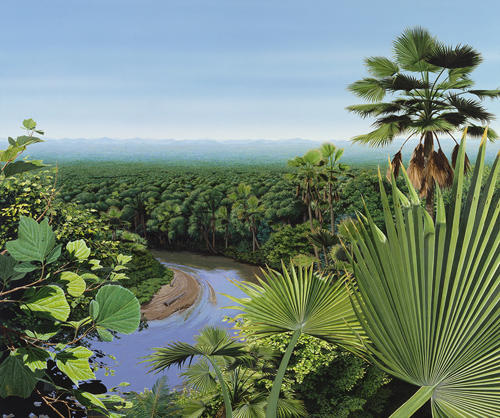 A post-apocalyptic forest: This post-extinction landscape is lush from warm weather and ample rain along the Front Range, but there are only a few types of trees. Extinct relatives of sycamores, walnut trees and palm trees are the most common. (Image by Donna Braginetz; courtesy of Denver Museum of Nature & Science)

“When you look at forests around the world today, you don’t see many forests dominated by evergreen flowering plants,” said the study’s lead author, Benjamin Blonder, who graduated last year from the lab of UA Professor Brian Enquist with a Ph.D. from the UA’s Department of Ecology and Evolutionary Biology and is now the science coordinator at the UA SkySchool. “Instead, they are dominated by deciduous species, plants that lose their leaves at some point during the year.”

The study provides much-needed evidence for how the extinction event unfolded in the plant communities at the time, Blonder said. While it was known that the plant species that existed before the impact were different from those that came after, data was sparse on whether the shift in plant assemblages was just a random phenomenon or a direct result of the event.

“If you think about a mass extinction caused by catastrophic event such as a meteorite impacting Earth, you might imagine all species are equally likely to die,” Blonder said. “Survival of the fittest doesn’t apply — the impact is like a reset button. The alternative hypothesis, however, is that some species had properties that enabled them to survive.

“Our study provides evidence of a dramatic shift from slow-growing plants to fast-growing species,” he said. “This tells us that the extinction was not random, and the way in which a plant acquires resources predicts how it can respond to a major disturbance. And potentially this also tells us why we find that modern forests are generally deciduous and not evergreen.” 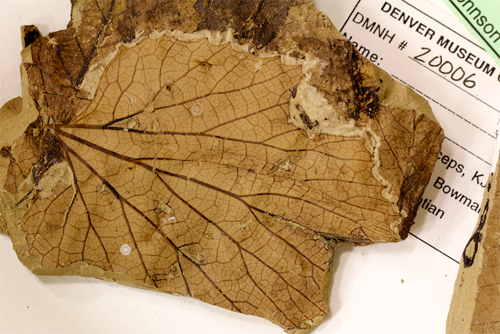 A fossilized leaf of ‘Vitis’ stantonii, a grapelike plant from the Hell Creek Formation in North Dakota. Blonder is especially interested in the venation network of each leaf, because veins may be a very good proxy for temperature via their role in constraining leaf water usage. “Fortunately many fossils have exquisite preservation of veins,” he said. (Photo credit: Benjamin Blonder)

Previously, other scientists found evidence of a dramatic drop in temperature caused by dust from the impact. Under the conditions of such an “impact winter,” many plants would have struggled harvesting enough sunlight to maintain their metabolism and growth.

“The hypothesis is that the impact winter introduced a very variable climate,” Blonder said. “That would have favored plants that grew quickly and could take advantage of changing conditions, such as deciduous plants.”

Blonder, Enquist and their colleagues Dana Royer from Wesleyan University, Kirk Johnson from the Smithsonian National Museum of Natural History and Ian Miller from the Denver Museum of Nature and Science studied a total of about 1,000 fossilized plant leaves collected from a location in southern North Dakota, embedded in rock layers known as the Hell Creek Formation, in what at the time was a lowland floodplain crisscrossed by river channels. The collection consists of more than 10,000 identified plant fossils and is housed primarily at the Denver Museum of Nature and Science. 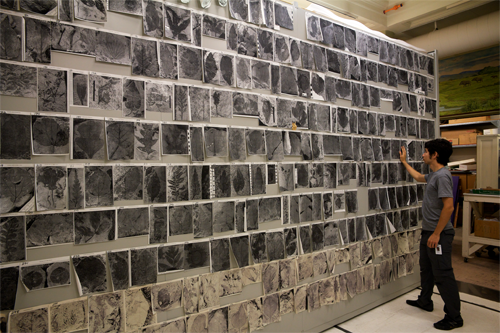 A botanical garden cast in stone: Blonder traveled to the Denver Museum of Nature and Science to study fossil leaves, in hopes they might be useful proxies for the late Cretaceous climate. (Photo credit: Benjamin Blonder)

By analyzing leaves, which convert carbon dioxide from the atmosphere and water into nutrients for the plant, the study followed a new approach that enabled the researchers to predict how plant species used carbon and water, shedding light on the ecological strategies of plant communities long gone, hidden under sediments for many millions of years.

“We measured the mass of a given leaf in relation to its area, which tells us whether the leaf was a chunky, expensive one to make for the plant, or whether it was a more flimsy, cheap one,” Blonder explained. “In other words, how much carbon the plant had invested in the leaf.”

In addition to the leaves’ mass-per-area ratio, Blonder and his coworkers measured the density of the leaves’ vein networks.

“When you hold a leaf up to the light, you see a pattern of veins running through it,” Blonder said. “That network determines how much water is moved through the leaf. If the density is high, the plant is able to transpire more water, and that means it can acquire carbon faster.

“By comparing the two parameters, we get an idea of resources invested versus resources returned, and that allows us to capture the ecological strategy of the plants we studied long after they went extinct.”

Evergreen plants are more likely to invest in leaves that are costly to construct but are well-built and last a long time, Blonder explained, while the leaves of deciduous plants tend to be short-lived but offer high metabolic rates.

“There is a spectrum between fast- and slow-growing species,” he said. “There is the ‘live fast, die young’ strategy and there is the ‘slow but steady’ strategy. You could compare it to financial strategies investing in stocks versus bonds.”

The analyses revealed that while slow-growing evergreens dominated the plant assemblages before the extinction event, fast-growing flowering species had taken their places afterward.

The National Science Foundation awarded Blonder a graduate research fellowship to pursue this research. Additional funding was provided by the Geological Society of America.

Blonder said he was inspired to pursue the research project after seeing a lecture on paleobiology at the UA.

“I had a strong interest in how plants function based on their leaves, and I was fascinated to learn about applying those biomechanical principles to reconstruct ecological functions of the past,” he said. “When you hold one of those leaves that is so exquisitely preserved in your hand knowing it’s 66 million years old, it’s a humbling feeling.”