To help clean up an oil spill or any other kind of environmental disaster, sometimes humans can learn a thing or two from nature.

A team of researchers from the Michigan State University College of Engineering is creating a kind of robotic sensor that could eventually be used to collect environmental pollution data from rivers, streams and lakes.

They are modeling the sensor after something that already exists in nature and is skilled at skimming across bodies of water – a water strider. 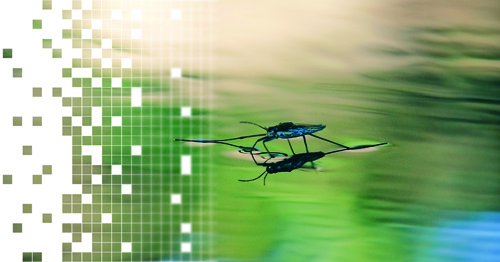 An MSU team is developing a new type of sensor that can detect contaminants in and above rivers, streams and lakes. The sensor is being modeled after insects that stride on the water’s surface. Photo courtesy of the MSU College of Engineering.

The MSU team is using a National Science Foundation grant of $500,000 to develop a small, inexpensive sensor that floats on the water and collects samples of chemical or bacterial readings.

The sensor also will have the ability to jump, enabling readings above the water to improve communications and localization. 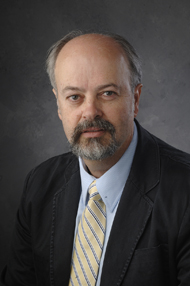 Matt Mutka, chairperson of MSU’s Department of Computer Science and Engineering, is part of a team developing an innovative water sensor. The team is using a $500,000 NSF grant to develop the technology, which is modeled after insects that skim across the surface of water. Photo courtesy of the MSU College of Engineering.

“The idea is to create very inexpensive, mobile sensors or small robots that can be quickly deployed, energy efficient and serve a large number of environmental monitoring applications,” said Matt Mutka, chairperson of the Department of Computer Science and Engineering and a member of the team. “We need to detect the concentrations and directional flow of the contaminants so we can create a map of how it is distributed in the water.”

The technology will come in handy when there are events such as the 2010 oil spill in the Kalamazoo River. The deployment of an army, or in this case, navy, of sensors would have been better able to detect where the pollution, in this case oil, was headed.

That particular spill dumped as many as 1 million gallons into the river, which eventually wound through more than 35 miles of waterways. More than 30 homes were evacuated and scores of people were warned about the quality of drinking water throughout the region.

“These sensors will be small and easy to place in the water by being tossed from shore or a boat,” Mutka said. “Once in the water, they will communicate with each other, consolidate their data samples and forward the samples to a receiver at the water’s edge, which can forward to servers that further process the data.”

The research is a collaboration of Mutka, Li Xiao, associate professor of computer science and engineering; and Ning Xi, University Distinguished Professor of electrical and computer engineering.