Paleontologists have discovered that a close relative of Velociraptor hunted the dwarfed inhabitants of Late Cretaceous Europe, an island landscape largely isolated from nearby continents.

While island animals tend to be smaller and more primitive than their continental cousins, the theropod Balaur bondoc was as large as its relatives on other parts of the globe, and demonstrated advanced adaptations including fused bones and two terrifyingly large claws on each hind foot.

A team of Paleontologists from the University of Bucharest and the American Museum of Natural History (AMNH) present their findings as the cover story of the Aug. 31 issue of the Proceedings of the National Academy of Sciences. 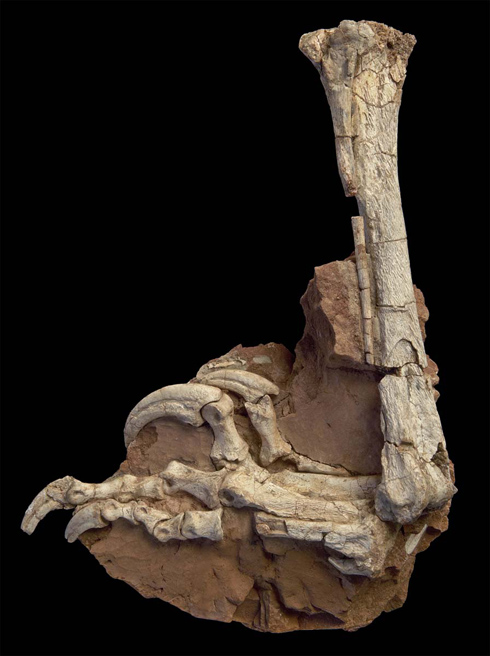 About the image: The fossilized hindlimb of Balaur bondoc shows the double-sickle claws of the foot, one of 20 unique features found on the animal, which lived on a Late Cretaceous island in what is now Europe. Image credit: Mick Ellison

“While we would expect that there were carnivorous animals in these faunas, finding one as unusual as Balaur is thrilling and is testament to the unusual animals found on islands today and in the past,” said paleontologist and co-author Mark Norell of AMNH.

The Balaur bondoc bones (Balaur from an archaic Romanian term for dragon, bondoc meaning stocky) represent the most complete predator skeleton paleontologists have found in sediments from the end of the Mesozoic in Europe.

While few in number, the fossils reveal an animal perhaps six to seven feet long with a stockier build than similarly sized Velociraptors elsewhere on the globe, but numerous similarities to the more familiar predator. 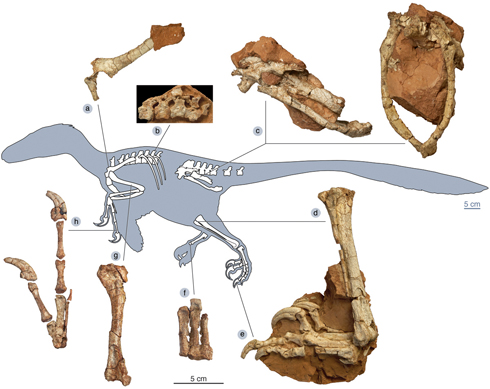 About the image: A reconstruction shows the skeletal anatomy of Balaur bondoc. While only a few bones exist, they reveal a great deal about the organism, and represent one of the most complete predatory dinosaur skeletons from the middle to Late Cretaceous of Europe. Image credit: Mick Ellison; Zoltan Csiki; Matyas Vremir; Stephan Brusatte; Mark Norell; AMNH

“Although Balaur is so extremely divergent morphologically, it is closely related to animals like Velociraptor and the feathered dinosaurs in China,” said lead author Zoltan Csiki, a paleontologist at the University of Bucharest. “The finding indicates that this area of the world, despite its archipelago geography, had at least intermittent faunal connections with the mainland up to the end of the Cretaceous. This connection was not really acknowledged until very recently.”