Stemming the tide of invasive species

A century earlier, that fish had also been introduced and become invasive, causing major aquatic damage that persists to this day.

“I knew all about the history of the common carp, especially the failure to recognize the threat and then act on it in a systematic and thoughtful manner. Today people aren’t aware we’ve been down this road before,” says Sorensen, a professor in the University of Minnesota’s Department of Fisheries, Wildlife and Conservation Biology.

“If you don’t do something, it’s like sitting on the train tracks and watching the train come.”

He decided to do something. 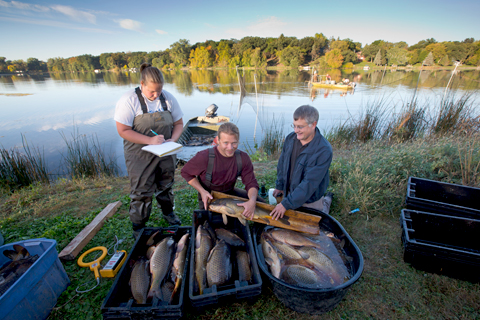 Researchers (l to r) Justine Koch, Reid Swanson, and Peter Sorensen measure a common carp on the shore of Keller Lake. That day they removed a pickup truckful of the fish. Image credit: University of Minnesota

Noting his previous work with controlling the sea lamprey, the Minnesota Legislature asked Sorensen, along with the state Department of Natural Resources, to draw up a sustained, scientifically coordinated response to bigheaded carp, zebra mussels, invasive water weeds, and other organisms fouling or threatening our waterways. Last year it took shape as the Minnesota Aquatic Invasive Species Research Center (MAISRC), based on the St. Paul campus.  Sorensen is its director.

The state’s Legislative-Citizen Commission on Minnesota Resources (LCCMR) has provided the bulk of initial funding, and at this writing the center seeks legislative funding to bring its facilities to operating level. Bigheaded carp and zebra mussels are a top priority.

Bigheaded carp are slippery customers, but Sorensen, and his colleagues have several weapons in their arsenal:

• DNA tracking. Using the common carp as a model, Sorensen’s group is studying how to relate amounts of DNA from invasive carp to the presence and number of individuals in a lake.

• “Judas carp.” Again using common carp as a model, they are investigating the release of sterile bigheaded carp, equipped with radio tracking tags and pheromone implants to attract other carp so a whole group can be harvested. “Bigheaded carp have a different anatomy and pheromones, so we really have to figure it out,” Sorensen says.

• Acoustic barriers. Carp have sensitive hearing and can be repelled by sound and slightly enhanced water flows. “We’re modifying existing locks and dams on the Mississippi, and we have a research proposal in with LCCMR to deter them at the Iowa border, at Lock and Dam Number 8,” says Sorensen.

• Food attractants. What will specifically attract bigheaded carp? Some types of plankton or Cyanobacteria (bluegreen algae) may help lure them to traps.

Sorensen and his group have already had great success controlling common carp. For example, they shut down the breeding and removed 75 percent of the carp in Riley Lake in Chanhassen and Gervais and Keller lakes in St. Paul.

Another import from eastern Eurasia, the zebra mussel, arrived around 1986 and has infested Lake Superior and the upper Mississippi River. While famous for fouling pipes, the mussels threaten swimmers and waders by virtue of their sharp shells and ecological damage to lakes and rivers.

Mollusk researcher Michael McCartney, who joined the University in fall 2013, will look for ways to contain them.

“They spread rapidly. In Minnesota the issue is overland spread, presumably by trailered boats,” says McCartney. “One goal of my work will be to look at pathways, as well as histories and mechanics of spread. Remarkably little is known about spread inland.”

He will test for genetic markers, similar to those used in forensics or tracing parentage, to follow the trail of spreading mussels. This evidence already shows that the U.S. invasion in the 1980s and 90s originated with several introductions from the Black and Caspian Sea regions.

Zebra mussels bring up some contentious issues, McCartney notes. For example, boaters may balk at boat inspections for an invader they feel powerless to stop, but he says prevention can succeed.

Eurasian watermilfoil and curlyleaf pondweed have been ruining shallow waters for decades.

“Curlyleaf has been here since about 1910, and is in at least 700 lakes in the state. Milfoil is in 200 to 275, and some lakes have both,” says MAISRC member Raymond Newman, a professor in the Department of Fisheries, Wildlife and Conservation Biology.

Decades ago, Newman did research on a native weevil that eats and reproduces inside stems of the invasive milfoil and, in sufficient numbers, can control the weed. Unfortunately, sunfish find the weevils tasty.

But fishing for sunfish makes things worse by removing the big males, leading to a high density of small, hungry sunfish, Newman says. He hopes to launch a project to lower the sunfish population density, leaving fewer but bigger sunfish. One complication that must be borne in mind: The same sunfish that eats the beneficial weevils also eats carp eggs.

Curlyleaf pondweed, however, hasn’t responded well to much except chemical treatment, Newman notes.

“The real difficulty for both weeds is restoring native plants, especially with poor water clarity,” he says. “Clear water even helps control milfoil because it doesn’t have to grow as high to get light.”

The center’s existence makes a statement that all is not lost for Minnesota’s waterways.

“We’re saying there are ways forward with invasive species prevention and control,” says Sorensen. “Every species has its weakness, and you have to find the right combination of things. It won’t happen overnight, but with persistence and patience I’m sure we can make a big difference.”

When the MAISRC is fully operational and research hits its stride, it will fill a gap that badly needs attention to save Minnesota rivers and lakes.

“It will be the only academic facility like this in the Midwest and possibly in the United States,” says Sorensen, “although Wisconsin has a nonacademic federal facility.”

We can’t let Wisconsin best us, can we?