Angela Day is a University of Washington doctoral student in political science and author of the new book “Red Light to Starboard: Recalling the Exxon Valdez Disaster.” She answered a few questions about the book for UW Today.

Q: What’s the basic concept behind this book?

A: As Prince William Sound emerged from a cloak of darkness on March 24, 1989, shades of pale spring light marked the dawning of a tragic day in Alaskan and American history. Oil boiled from the bowels of the supertanker Exxon Valdez, grounded on Bligh Reef, while a fisherman, Bobby Day, readied his boat for a herring season that would never open. The book centers on his story and gives voice to the 10,000 fishermen who struggled to hold Exxon accountable in the wake of the spill. The book brings to life the personal and environmental consequences of this disaster, while tracing the regulatory and governance failures that gave rise to the spill. 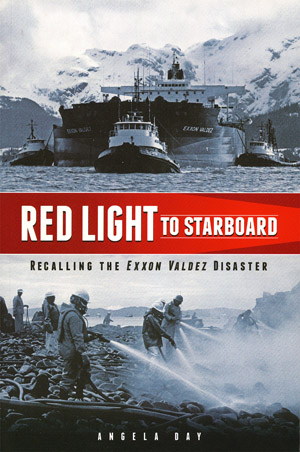 “Red light to starboard” was the final warning delivered by the lookout on the Exxon Valdez on that fateful night. That admonition also serves as a metaphor for many missed signals that a major spill in Prince William Sound was inevitable. This story reveals the regulatory and governance failures that gave rise to the spill, politics surrounding oil development, coziness between the government and oil industry, and unheeded warnings by local citizens and industry insiders.  As those contributing factors emerge, the book develops an implicit thesis that citizens and local resource users, or groups representing the public interest, can and should have a formal mechanism for oversight in the regulatory process.

Q: You have a personal connection with this material. Would you explain?

A: Even before I came to have a personal connection with this disaster, the Exxon Valdez oil spill was a defining event in my life. Like other Americans, I was astounded that an accident like this could happen, and heartbroken by the images of environmental devastation I saw nightly on the news.

When I met my husband — the fisherman at the center of this story — I came to a deeper understanding of the spill’s impacts and I wanted others to come to know and feel those impacts as I had. I also found myself driven by a more profound question of why the spill had happened. The more I began to try and answer this question, the more complexities I discovered. Weaving all of these pieces of evidence into a narrative became a challenging task, but the personal connection and intriguing history made this a book I had to write.

Q: You state in your epilogue that one lesson that could be learned from the disaster is that “assigning blame, putting a dollar value on a pristine environment, and cleaning up an environmental disaster are all fruitless efforts.” Why do you feel this is true?

A: Once loosed in the cold, clear waters of Prince William Sound, eleven million gallons of oil proved impossible to recover. The commitments outlined in the industry’s contingency plans may have met their legal obligations, but they were of little value in the struggle to contain crude oil as it was carried on the tides and embedded in the gravel beaches of Prince William Sound where it can still be found today.

Cleaning up the spill proved as futile as the efforts of the fishermen to hold Exxon to account for the harm done to their way of life and place on earth. Their class action lawsuit against what would become the largest and most profitable corporation in the world, failed to deliver the emotional and financial justice the fishermen sought. By 2008, when the Supreme Court’s final ruling brought an end to the legal battle, nearly 20 percent of the original plaintiffs had passed away. The ruling whittled down the punitive damages originally granted by an Anchorage jury to 10 cents on the dollar.

The fishermen’s case embodies the structural disadvantages of individuals versus powerful, repeat players in our legal and political system. Those inequities are as real as the physical properties of oil and water that makes them impossible to separate.

Q: Despite the above, you wrote that “hope arose” out of the Valdez disaster “like a phoenix from the oiled beaches of the Sound.” Would you explain?

A: After the spill, the Oil Pollution Act of 1990 mandated the formation of a Regional Citizens’ Advisory Council, funded by the oil industry. The Council brings balance to the interaction among citizens, industry and regulators. It could serve as a model for preventing future accidents in energy exploration, production and transport.

Q: Finally, what do you hope readers take away from the book?

A: I hopethat readers will finish the book having been drawn in to the story of a fisherman and other Alaskans whose lives were changed by a manmade disaster — and enlightened by facts that illuminate broader problems of governance and their potential solutions.