Venom of the brown recluse spider causes a reaction in the body that is different from what researchers previously thought, a discovery that could lead to development of new treatments for spider bites.

University of Arizona researchers led a team that has discovered that venom of spiders in the genus Loxosceles, which contains about 100 spider species including the brown recluse, produces a different chemical product in the human body than scientists believed.

The finding has implications for understanding how these spider bites affect humans and for the development of possible treatments for the bites.

One of few common spiders whose bites can have a seriously harmful effect on humans, the brown recluse has venom that contains a rare protein that can cause a blackened lesion at the site of a bite, or a much less common, but more dangerous, systemic reaction in humans.

“This is not a protein that is usually found in the venom of poisonous animals,” said Matthew Cordes, an associate professor in the UA’s department of chemistry and biochemistry and member of the UA BIO5 Institute who led the study, published today in the journal PLOS ONE. 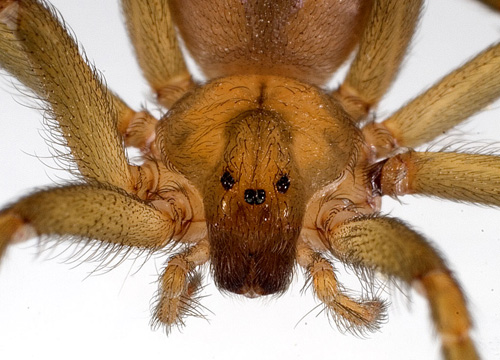 Loxosceles laeta, a South American brown spider, is one of three species whose venom was tested by UA researchers and found to produce a different chemical product than scientists previously believed. (Image credit: Jonathan Coddington)

The protein, once injected into a bite wound, attacks phospholipid molecules that are the major component of cell membranes. The protein acts to cleave off the head portion of the lipids, leaving behind, scientists long have assumed, a simple, linear, headless lipid molecule.

The research team has discovered that in the test tube, the venom protein causes lipids to bend into a ring structure upon the loss of the head portion, generating a cyclical chemical product that is very different than the linear molecule it was assumed to produce.

“The very first step of this whole process that leads to skin and tissue damage or systemic effects is not what we all thought it was,” Cordes said.

The lipid knocks off its own head by making a ring within itself, prompted by the protein from the spider venom, Cordes explained. “Part of the outcome of the reaction, the release of the head group, is the same. So initially scientists believed that this was all that was happening, then that became established in the literature.” 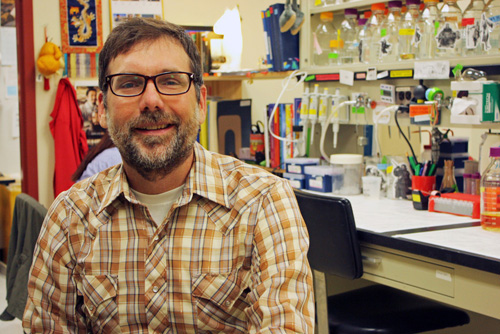 Matt Cordes, a UA associate professor in the department of chemistry and biochemistry, led the team that discovered that the venom of some spiders in the genus Loxosceles causes a different reaction in the body than previously thought. (Photo by: Beatriz Verdugo/UANews)

Cordes, Bandarian and Daniel Lajoie, a PhD candidate in Cordes’s lab, tested venom from three species of brown recluse spiders from North and South America. Binford, an arachnologist who has traveled the world in search of the eight-legged creatures, collected the spiders, isolated their DNA and milked their venom, which was then frozen and shipped to the UA labs for analysis.

“We didn’t find what we thought we were going to find,” Cordes added. “We found something more interesting.” 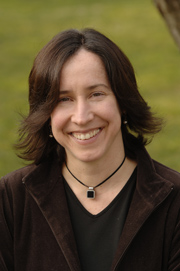 Arachnologist Greta Binford, an associate professor of biology at Lewis and Clark College in Portland, Ore. who completed her PhD and postdoctoral studies at the UA, searches the world for spiders and milks their venom to study its chemical compounds. (Image courtesy of Greta Binford)

The cyclical shape of the headless molecule means that it has different chemical properties than the linear headless lipid believed to be generated by the protein, Cordes explained. The biological effects of either molecule in human membranes or insects aren’t completely known, he said, but they are likely to be very different.

“We think it’s something about that ring product generated by this protein that activates the immune system,” Binford said.

“The properties of this cyclic molecule aren’t well-known yet, but knowing that it’s being produced by toxins in venoms might heighten interest,” Cordes said. “Knowing how the protein is actually working and making this cyclic molecule could also lead to better insights on how to inhibit that protein.”

For those who do have a reaction to the venom, the most common response is inflammation that after one to two days can develop into a dark lesion surrounding the bite site. The blackening, or necrosis, of the skin is dead skin cells, evidence of the immune system’s efforts to prevent spread of the toxin by preventing blood flow to the affected area.

“Our bodies are basically committing tissue suicide,” Binford said. “That can be very minor to pretty major, like losing a big chunk of skin. The only treatment in that case is usually to have a skin graft done by a plastic surgeon.”

About once every five years, Binford said, someone develops a serious systemic reaction to a brown recluse bite, which can be fatal.

“If it goes systemic, then it can cause destruction of blood cells and various other effects that can in extreme cases lead to death by kidney failure or renal failure,” Cordes said.

However, it is believed that the vast majority of brown recluse bites are so minor that they go unnoticed by those who were bitten.

It’s not known what determines the type or severity of reaction a person is likely to get when bitten by a brown recluse, Cordes said, “but what is known is that this protein is the main cause of it.”

“I think if we know how the toxin works, it opens a new door to understanding how the syndrome is initiated as well as the possibility of blocking that process.”

“The discovery of this product may be crucial in understanding what exactly is going on in the human reaction,” Binford said.

For the spider biologists and chemists, the work has just begun.

“These spiders have been around with this toxin for over 120 million years,” Binford said. “I want to understand the full set of variation present in a single spider and across the entire genus and the activity of this compound.”

“People think about the brown recluse with fear,” she added. “When I think about a brown recluse or any other spider, I think about how a single spider can have 1,000 chemicals in its venom and there are about 44,000 species, so tens of millions of unique compounds in spider venom that we’re in the process of discovering. We have a lot to learn about how these venom toxins work and potential for understanding new chemistry and developing new drugs or treatments.”

Understanding how brown recluse venom produces harmful effects in humans is particularly relevant in Arizona, a hotbed for these spiders, Cordes said: “There are more variant species of Loxosceles here than anywhere else in the United States.”

The UA-led study of brown recluse venom was supported initially by a pilot project award from the UA BIO5 Institute. Binford’s venom collections were supported by a National Science Foundation Career Award.