New work from Carnegie’s Scott Sheppard and Chadwick Trujillo of the Gemini Observatory reports the discovery of a distant dwarf planet, called 2012 VP113, which was found beyond the known edge of the Solar System. This is likely one of thousands of distant objects that are thought to form the so-called inner Oort cloud. What’s more, their work indicates the potential presence of an enormous planet, perhaps up to 10 times the size of Earth, not yet seen, but possibly influencing the orbit of 2012 VP113, as well as other inner Oort cloud objects.

Their findings are published March 27 in Nature.

The known Solar System can be divided into three parts: the rocky planets like Earth, which are close to the Sun; the gas giant planets, which are further out; and the frozen objects of the Kuiper belt, which lie just beyond Neptune’s orbit. Beyond this, there appears to be an edge to the Solar System where only one object, Sedna, was previously known to exist for its entire orbit. But the newly found 2012 VP113 has an orbit that stays even beyond Sedna, making it the furthest known in the Solar System.

“This is an extraordinary result that redefines our understanding of our Solar System,” says Linda Elkins-Tanton, director of Carnegie’s Department of Terrestrial Magnetism. 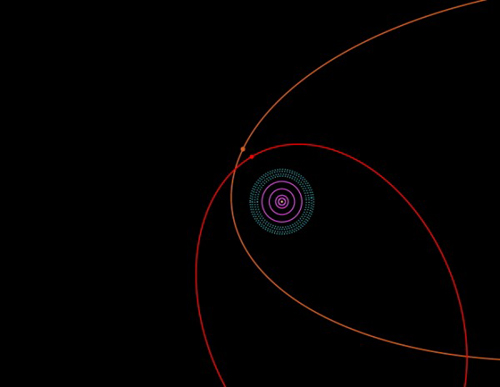 This is an orbit diagram for the outer solar system. The Sun and Terrestrial planets are at the center. The orbits of the four giant planets, Jupiter, Saturn, Uranus and Neptune, are shown by purple solid circles. The Kuiper Belt, including Pluto, is shown by the dotted light blue region just beyond the giant planets. Sedna’s orbit is shown in orange while 2012 VP113’s orbit is shown in red. Both objects are currently near their closest approach to the Sun (perihelion). They would be too faint to detect when in the outer parts of their orbits. Notice that both orbits have similar perihelion locations on the sky and both are far away from the giant planet and Kuiper Belt regions. Image is courtesy of Scott Sheppard.

Sedna was discovered beyond the Kuiper Belt edge in 2003, and it was not known if Sedna was unique, as Pluto once was thought to be before the Kuiper Belt was discovered. With the discovery of 2012 VP113 it is now clear Sedna is not unique and is likely the second known member of the hypothesized inner Oort cloud, the likely origin of some comets.

2012 VP113’s closest orbit point to the Sun brings it to about 80 times the distance of the Earth from the Sun, a measurement referred to as an astronomical unit or AU. For context, the rocky planets and asteroids exist at distances ranging between .39 and 4.2 AU. Gas giants are found between 5 and 30 AU, and the Kuiper belt (composed of thousands of icy objects, including Pluto) ranges from 30 to 50 AU. In our solar system there is a distinct edge at 50 AU. Only Sedna was known to stay significantly beyond this outer boundary at 76 AU for its entire orbit.

“The search for these distant inner Oort cloud objects beyond Sedna and 2012 VP113 should continue, as they could tell us a lot about how our Solar System formed and evolved,” says Sheppard. 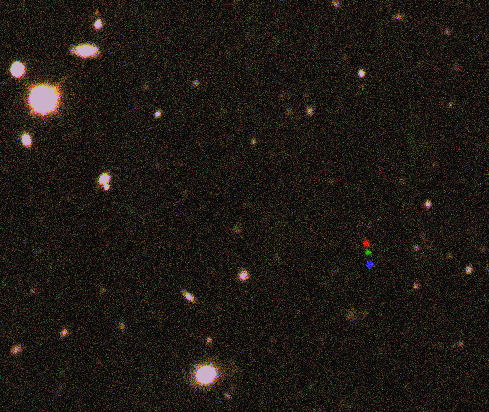 These are the discovery images of 2012 VP113, affectionately called “Biden,” because of the VP in the provisional name. It has the most distant orbit known in our Solar System. Three images of the night sky, each taken about two hours apart, were combined into one. The first image was artificially colored red, second green and third blue. 2012 VP113 moved between each image as seen by the red, green and blue dots. The background stars and galaxies did not move and thus their red, green and blue images combine to showup as white sources. Image courtesy of Scott Sheppard and Chad Trujillo.

Sheppard and Trujillo used the new Dark Energy Camera (DECam) on the NOAO 4 meter telescope in Chile for discovery. DECam has the largest field-of-view of any 4-meter or larger telescope, giving it unprecedented ability to search large areas of sky for faint objects. The Magellan 6.5-meter telescope at Carnegie’s Las Campanas Observatory was used to determine the orbit of 2012 VP113 and obtain detailed information about its surface properties.

From the amount of sky searched, Sheppard and Trujillo determine that about 900 objects with orbits like Sedna and 2012 VP113 and sizes larger than 1000 km may exist and that the total population of the inner Oort cloud is likely bigger than that of the Kuiper Belt and main asteroid belt.

Both Sedna and 2012 VP113 were found near their closest approach to the Sun, but they both have orbits that go out to hundreds of AU, at which point they would be too faint to discover. In fact, the similarity in the orbits found for Sedna, 2012 VP113 and a few other objects near the edge of the Kuiper Belt suggests that an unknown massive perturbing body may be shepherding these objects into these similar orbital configurations. Sheppard and Trujillo suggest a Super Earth or an even larger object at hundreds of AU could create the shepherding effect seen in the orbits of these objects, which are too distant to be perturbed significantly by any of the known planets.