Massive explosions on the sun unleash radiation that could kill astronauts in space.

Now, researchers from the U.S. and South Korea have developed a warning system capable of forecasting the radiation from these violent solar storms nearly three hours (166 minutes) in advance, giving astronauts, as well as air crews flying over Earth’s polar regions, time to take protective action.

Physicists from the University of Delaware and from Chungnam National University and Hanyang University developed the system and report on it in Space Weather: The International Journal of Research and Applications, published by the American Geophysical Union. The research article also is selected as an “Editor’s Highlight.”

Prof. John Bieber at UD’s Bartol Research Institute, based in the Department of Physics and Astronomy, directed the scientific project. The article’s lead author is Su Yeon Oh, a postdoctoral researcher from Chungnam National University, who worked with Bieber on the project at UD.

“Traveling nearly at the speed of light, it takes just 10 minutes for the first particles ejected from a solar storm to reach Earth,” Bieber says. These sun storms can cover thousands of miles on the sun, like a wave of exploding hydrogen bombs.

The researchers used data collected by two neutron monitors installed years ago at the South Pole by UD — one inside and one outside the Amundsen-Scott South Pole Station — to determine the intensity of the high-energy, fast-moving particles that arrive to Earth first from solar storms. These particles can carry energies over 500 megaelectron volts (MeV) — that’s over 500 million electron volts.

By examining the properties of these first-arriving particles, the scientists can make useful predictions about the slower-moving, yet more dangerous particles to follow.

“These slower-moving particles are more dangerous because there are so many more of them. That’s where the danger lies,” Bieber explains. 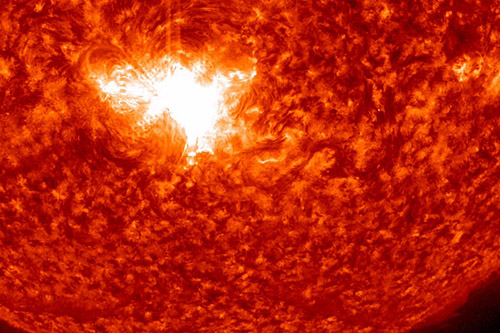 From measurements of the neutrons produced in past solar events taken by UD’s neutron monitors at South Pole, the scientists calculated the energy of the first-arriving protons and, from that, estimated the intensity of the later-arriving, more dangerous particles.

The authors compared their predictions for 12 solar events against observations made by geosynchronous satellites, achieving good agreement for protons with energies higher than 40 to 80 megaelectron (million) volts.

Depending on the protons’ energy, the system provides a warning time up to 166 minutes. That would give astronauts on deep space flights time to seek out an armored area in their spacecraft, Bieber says, and pilots flying in Earth’s polar regions, where the planet’s protective magnetic field is weaker, time to reduce their altitude. 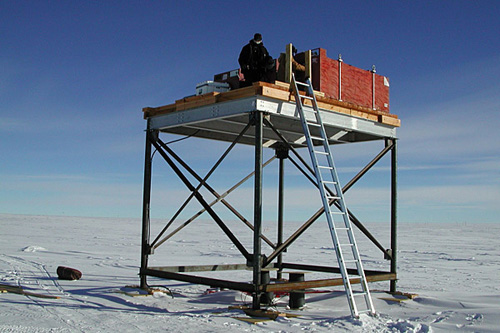 How great is the risk?

The sun is now moving into a peak period of solar storm activity, which generally occurs every 11 years. The solar storms, flares and coronal mass ejections threaten the electrical system on Earth in addition to some astronauts and fliers.

“If you’re in a plane flying over the poles, there is an increased radiation exposure comparable to having an extra chest X-ray you weren’t planning on,” says Bieber. “However, if you’re an astronaut on the way to the moon or Mars, it’s a big problem. It could kill you.”

Most astronauts have flown in low Earth orbit in recent years, but if we go back to the moon or decide to send humans to Mars, we need to think about these things, Bieber says. According to him, some of the Apollo astronauts were just lucky.

“Somehow they got these moon launches between big solar flares that would have killed them right then and there,” Bieber notes.

The research was funded by the National Research Foundation of Korea through the South Korean government and by the U.S. National Science Foundation, NASA and the NASA/EPSCoR program.