Not Your Typical Summer Job for High School Students

When we think of high school summer jobs what typically comes to mind are images of lawn-mowing, camp-counseling, life-guarding at a swimming pool, and baby-sitting. But for eight high school students from the East Bay Area, a job this summer means a lab coat and safety glasses, working in a state-of-the art microbiology research facility on the next-step in bioenergy.

The program known as “iCLEM,” which stands for Introductory College Level Experience in Microbiology, is a unique paid summer internship for high school students who trend outside the typical curve of academic enrichment. Sponsored by the Joint BioEnergy Institute (JBEI) and the Synthetic Biology Engineering Research Center (SynBERC), with funding from the U.S. Department of Energy (DOE) and the National Science Foundation (NSF), iCLEM pays the students a total of $2,000 upon completion of an eight-week program in which they do real science in collaboration with high school teachers and researchers from JBEI and SynBERC. 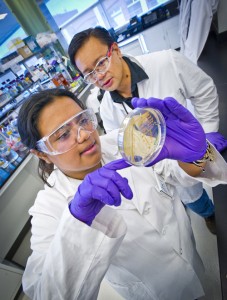 “The mission of iCLEM is to prepare high school students for careers in science and engineering and to help teachers translate their research experiences into classroom curricula and activities,” says Kate Spohr, who heads SynBERC’s education and outreach program and manages iCLEM. “The iCLEM program is now in its fifth year, and for 2012, in addition to an enthusiastic and talented group of students, we have two credentialed high school science teachers and two UC Berkeley seniors who are affiliated with the CalTeach science and   mathematics teacher education program.”

This year’s iCLEM students are a mix of rising seniors and juniors from Oakland, Berkeley and Richmond. The lead teacher is Chris Tolentino, who teaches biology at Richmond High School.

“I became interested in the iCLEM program because I would be doing research with young people in a state of the art facility,” Tolentino says. “The iCLEM program is beneficial on so many levels. Students are able to contribute to scientific research and prepare themselves for the college application process while earning money. The undergrads with CalTeach get practice teaching a small class, and we teachers get research experience we’re able to take back into our regular classrooms.”

The iCLEM program was started in 2007 by Clem Fortman and James Carothers who were then post-doctoral researchers at JBEI and SynBERC.

“The idea was to provide an opportunity that could make a critical difference in the lives of students who are from economically disadvantaged backgrounds and have little or no family history of college attendance,” Fortman has said. “We believed that given a chance to excel, these students would make the most of the opportunity.”

To date, iCLEM alumni have had a 95-percent college acceptance rate, nearly double the national figures for students of comparable socioeconomic backgrounds. More than two-thirds of iCLEM’s students have majored in science, and the schools they are attending include the UC campuses at Berkeley, Santa Cruz and Santa Barbara, and Cal Poly San Luis Obispo. 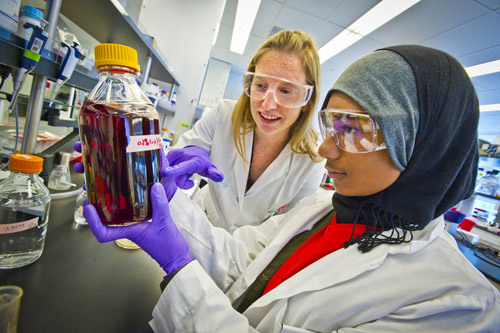 Katie Lenahan who teaches chemistry at Kennedy High School in Richmond, shown here with Fathima Mujahed, a student from Emery Secondary, is projected as the lead teacher for iCLEM in the summer of 2013. (Photo by Roy Kaltschmidt, Berkeley Lab)

The other high school teacher in iCLEM 2012 is Katie Lenahan who teaches chemistry at Kennedy High School in Richmond. Under a system in which teachers spend two consecutive years with the program, Tolentino, in his second year, mentors Lenahan who will serve as iCLEM’s lead teacher next year. The CalTeach undergrads are Leo Chick and Todd Alpert. In addition, there are three science advisors, Kevin George and Jorge Alonso Gutierrez, post-doctoral researchers with JBEI, and Ulisses Nunes da Rocha, a post-doc at Lawrence Berkeley National Laboratory. John Gladden, a molecular and cell biologist with JBEI, serves as the iCLEM program director.

This year’s iCLEM session runs from June 19 to August 9. Students and teachers typically work a schedule that runs from 9:00 am to 5:00 pm, Monday through Friday. In addition to bioenergy research projects, the iCLEM curriculum also includes field trips to Bay Area biotech companies and research universities, and lectures from leading scientists at JBEI and SynBERC.

“Throughout all of their activities, we are continually asking the students questions about what they are doing and why,” Tolentino says. “The goal is to train them to think critically, as research scientists must do.”

In addition to doing science, the iCLEM students also get help on preparing personal statements for their college applications, as well as instructions on resumé-building and other skill-sets they will need as they continue their educational paths.

“We try to provide a comprehensive program,” Tolentino says. “We want to give our students research experiences that will not only help prepare them for college but also for life outside of the classroom.” 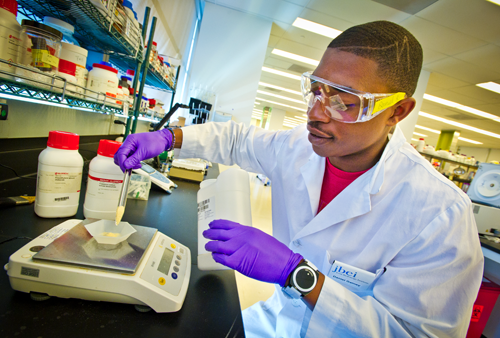 In addition to doing science, iCLEM students also get help on preparing college applications and other skill-sets they will need as they continue their educational paths. (Photo by Roy Kaltschmidt, Berkeley Lab)

All of the iCLEM laboratory work is carried out at JBEI, which is located in Emeryville. JBEI is one of three Bioenergy Research Centers funded by DOE to advance the development of the next generation of biofuels. It is a scientific partnership led by Lawrence Berkeley National Laboratory (Berkeley Lab) and including the Sandia National Laboratories, the UC campuses of Berkeley and Davis, the Carnegie Institution for Science, and the Lawrence Livermore National Laboratory.

SynBERC is also a multi-institutional partnership, funded by NSF, that is aimed at “making biology easier to engineer.” Its mission is to lay the foundation for the emerging field of synthetic biology through the development of foundational understanding and technologies that will enable researchers to design and build standardized, integrated biological systems that can carry out specific functions. The SynBERC partnership is led by UC Berkeley and includes UC San Francisco, Harvard, MIT, Stanford, and Prairie View A&M University.