Smartphone users value their privacy and are willing to pay for it, CU-Boulder economists find

Average smartphone users are willing to pay up to $5 extra for a typical application—or “app”—that won’t monitor their locations, contact lists and other personal information, a study conducted by two economists at the University of Colorado Boulder has found.

The researchers believe theirs is the first economic study to gauge the monetary value smartphone users place on privacy. That value is measured in consumers’ “willingness to pay” for five different kinds of digital anonymity.

The economists’ team surveyed 1,726 people in seven cities nationwide and found a “representative consumer” was willing to pay $2.28 to conceal browser history, $4.05 to conceal contact lists, $1.19 to conceal personal locations, $1.75 to conceal the phone’s ID number, and $3.58 to conceal the contents of text messages. 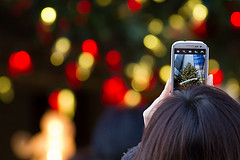 And consumers of all types are willing to pay $2.12 to eliminate advertising on apps.

The study, “The Value of Online Privacy,” was published online this fall in Social Science Research Network. Associate Professor Scott J. Savage and Professor Donald M. Waldman are co-authors and CU-Boulder economists whose research includes the study of pricing and valuation.

In recent years, news reports have variously suggested that people do or do not value their privacy. But those reports were not based on data, Savage and Waldman noted.

“There’s minimal research, and even the work that’s done is not in economics. It’s done in the area of computer science, which looks at privacy differently,” said Savage. And while smartphone users might relinquish personal data, that doesn’t mean they don’t value privacy, the economists said.

Full disclosure of how apps use personal information, “similar to the labeling of food contents in grocery stores,” could benefit both consumers and app developers, they write.

The smartphone is an ideal lens on privacy because it’s easy to see which kinds of privacy—or “permissions”—people give up, Waldman said.

Users grant privacy permissions as a condition of using apps, which are burgeoning. Apps for iPhone, Android and Windows smartphones will be downloaded an estimated 5 billion times in the next year.

The price of most general-purpose consumer apps ranges from free to $6, though some highly specialized apps used for medical purposes and the like could cost $500 to $1,000.

Smartphone apps can save time, and consumers, knowingly or unknowingly, generally trade some personal information for the benefit.

Those who download a weather app might allow the app to monitor their phones’ location. That way, users can retrieve local weather information anywhere, anytime without having to consult a newspaper or telephone hotline. Savvy users can reap such benefits across a range of apps.

App developers should give consumers clear information and choices about privacy, the economists said. “If consumers know what’s going on, they can make informed choices and pick apps to fit their preferences; it’s way better than any regulation or government interfering in the market that it knows very little about,” Savage said.

“They value their privacy, so if you present them with different menus of stuff, they’re going to respond and make, we hope, rational choices,” Waldman said.

In many cases, users who give up personal information have a good reason for doing so—because, for instance, they want to find the nearest coffee shop, and an app can provide that information only when it knows where the phone is.

However, many apps gather personal data unnecessary for the proper functioning of the app. And that has implications.

“Just think about it,” Waldman said. “If someone knows every app you’ve got on your phone and knows how you use it, and have other information on your location and browser history, they have a pretty good picture of who you are.”

The work was funded by the Engine Research Foundation, a nonprofit organization in San Francisco concerned with startup firms and public policy.

More on this story will appear in Colorado Arts & Sciences Magazine at https://artsandsciences.colorado.edu/magazine.