Ichthyologist George Burgess, director of the file housed at the Florida Museum of Natural History on the UF campus, said Florida typically has the highest number of attacks worldwide, but 2010 marked the state’s fourth straight year of decline. Florida led the U.S. with 13 reported attacks, but the total was significantly lower than the yearly average of 23 over the past decade.

“Florida had its lowest total since 2004, which was 12,” Burgess said. “Maybe it’s a reflection of the downturn in the economy and the number of tourists coming to Florida, or the amount of money native Floridians can spend taking holidays and going to the beach.”

Worldwide, 79 attacks occurred in 2010, the highest number since 2000 (80), but the global total of six fatalities was only slightly above average, Burgess said. Attacks worldwide numbered 63 in 2009, close to the yearly average over the past decade of 63.5.

“Based on odds, you should have more attacks than the previous year,” Burgess said. “But the rate of attacks is not necessarily going up — population is rising and the interest in aquatic recreation grows. That will continue as population rises.” 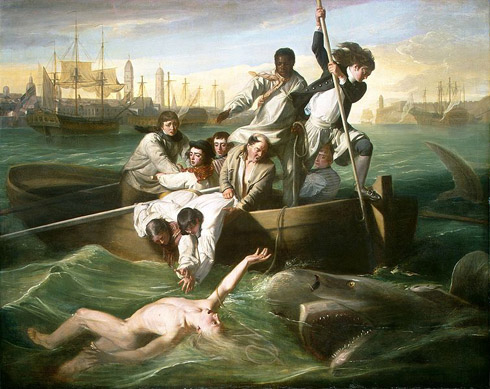 The United States had 36 incidents, including five in North Carolina and four each in California, Hawaii and South Carolina. There were single attacks in Georgia, Maine, Oregon, Texas, Virginia and Washington. Florida’s four-year decline began in 2007 with 31 attacks, followed by 28 in 2008, 18 in 2009 and 13 last year.

The U.S. led the world in shark attacks — an average year by U.S. standards — followed by Australia (14), South Africa (8), Vietnam (6) and Egypt (6). The most unusual event occurred off the coast of Egypt in early December with five attacks, including one fatality. The attacks occurred within five days and four of the five were attributed to two individual sharks.

“This was a situation that was hugely unusual by shark attack standards,” said Burgess, who has researched sharks at the museum for more than 35 years. “It was probably the most unusual shark incident of my career.”

Burgess suggests the attacks in the Red Sea may be attributed to a combination of natural and human factors. Some of the reasons include higher water temperatures caused by an unusually hot summer, international livestock traders dumping sheep carcasses into the water and divers feeding reef fishes and sharks, he said.

“The reality is, going into the sea is a wilderness experience,” Burgess said. “You’re visiting a foreign environment — it’s not a situation where you’re guaranteed success.”

Thankfully, in the sea the risks are low and the number of shark attacks in a year could be cut in half if people just used more common sense, Burgess said. There are simple ways to reduce the possibility of a shark attack, he said, including avoiding fishing areas and inlets where sharks gather and leaving the water when a shark is sighted.

“The sea is actually very forgiving, certainly from the standpoint of the animal life,” Burgess said. “When you look at the big picture, it’s kind of ironic that these animals which are apex predators, the top of the food chain in the sea, are so readily caught.”

Because they are experts at finding their next meal, sharks are threatened by the lure of fishing lines. Humans kill 30 million to 70 million sharks per year in fisheries, while sharks claim an average of five human lives each year — the number of deaths caused by sharks is minimal compared to the billions of hours humans spend in the sea every year, he said.

“One-on-one in the sea, the sharks are going to win in a confrontation with humans if they really want to do so,” Burgess said. “But out of the sea, we can sit high and dry with a beer in our hand, put a line overboard and catch the fiercest animal in the sea.”

Surfers were the victims of slightly more than half of the incidents reported in 2010, nearly 51 percent of the cases. An economic downturn will usually influence tourists but not necessarily surfers, whose sport is relatively low-cost, Burgess said.

Swimmers and waders were the second-largest group affected, accounting for nearly 38 percent of the shark attacks internationally.

The 2010 Worldwide Shark Attack Summary may be viewed online at www.flmnh.ufl.edu/fish/sharks/isaf/isaf.htm.