ANN ARBOR, Mich. — Shade-grown coffee farms support native bees that help maintain the health of some of the world’s most biodiverse tropical regions, according to a study by a University of Michigan biologist and a colleague at the University of California, Berkeley.

The study suggests that by pollinating native trees on shade-coffee farms and adjacent patches of forest, the bees help preserve the genetic diversity of remnant native-tree populations.

The study was published online Monday in the Proceedings of the National Academy of Sciences.

“A concern in tropical agriculture areas is that increasingly fragmented landscapes isolate native plant populations, eventually leading to lower genetic diversity,” said Christopher Dick, a U-M assistant professor of ecology and evolutionary biology. “But this study shows that specialized native bees help enhance the fecundity and the genetic diversity of remnant native trees, which could serve as reservoirs for future forest regeneration.” 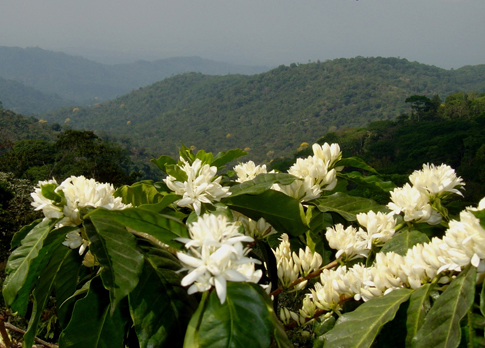 About the image above: Shade coffee vista in Chiapas, Mexico, with coffee bloom in foreground. Image credit: Photos by Shalene Jha, University of California, Berkeley.

An estimated 32.1 million acres of tropical forest are destroyed each year by the expansion of cropland, pasture and logging. Often grown adjacent to remnant forest patches, coffee crops cover more than 27 million acres of land in many of the world’s most biodiverse regions.

Over the last three decades, many Latin American coffee farmers have abandoned traditional shade-growing techniques, in which plants are grown beneath a diverse canopy of trees. In an effort to increase production, much of the acreage has been converted to “sun coffee,” which involves thinning or removing the canopy. 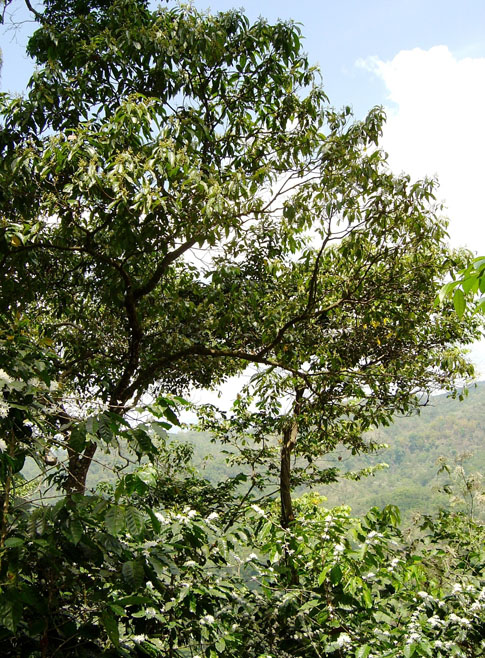 About the image above: Miconia affinis tree growing within a shade-coffee farm in Chiapas, Mexico. Image credit: Photos by Shalene Jha, University of California, Berkeley.

In the latest study, U-M’s Dick and UC-Berkeley’s Shalene Jha investigated the role of native bees that pollinate native trees in and around shade-grown coffee farms in the highlands of southern Chiapas, Mexico. In their study area, tropical forest now represents less than 10 percent of the land cover.Jha and Dick wanted to determine the degree to which native bees, which forage for pollen and nectar and pollinate trees in the process, facilitate gene flow between the remnant forest and adjacent shade-coffee farms.

They focused on Miconia affinis, a small, native understory tree that many farmers allow to invade shade-coffee farms because the trees help control soil erosion.

M. affinis, commonly known as the saquiyac tree, is pollinated by an unusual method known as buzz pollination. In order to release pollen from the tree’s flowers, bees grab hold and vibrate their flight muscles, shaking the pollen free. Non-native Africanized honeybees don’t perform buzz pollination, but many native bees do.

“Our focus on a buzz-pollinated tree allowed us to exclude Africanized honeybees and highlight the role of native bees as both pollinators and vectors of gene flow in the shade-coffee landscape mosaic,” said Jha, a postdoctoral fellow at UC-Berkeley who conducted the research while earning her doctorate at U-M. 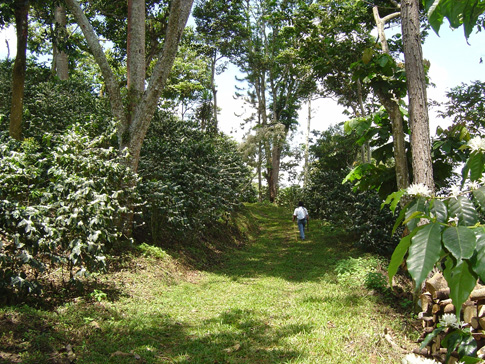 About the image above: Walking within a shade coffee farm in Chiapas, Mexico. Image credit: Photos by Shalene Jha, University of California, Berkeley.

Jha and Dick combined field observations with seed-parentage genetic analysis of Miconia affinis. They found that trees growing on shade-coffee farms received bee-delivered pollen from twice as many donor trees as M. affinis trees growing in the adjacent remnant forest. The higher number of pollen donors translates into greater genetic diversity among the offspring of the shade-farm trees.

Seed parentage analysis revealed that pollen from forest trees sired 65.1 percent of the seeds sampled from M. affinis trees growing in a shade-coffee habitat. That finding demonstrates that native bees are promoting gene flow between the remnant forest and the coffee farms—bridging the two habitat types—and that the shade-farm trees serve as a repository of local M. affinis genetic diversity, according to the authors.

In addition, Jha and Dick found that native bees carried pollen twice as far in a shade-coffee habitat than they did in the forest. They documented shade-farm pollination trips of nearly a mile, which are among the longest precisely recorded pollination trips by native tropical bees.

Jha and Dick said their results likely apply to other buzz-pollinated plants, which represent about 8 percent of the world’s flowering plant species, as well as to other native plants whose limited pollen and nectar rewards don’t attract honeybees.

The enhanced genetic diversity of the shade-farm trees could provide a reservoir for future forest regeneration, as the coffee farms typically fall out of production in less than a century. Given that potential, along with the shade farm’s previously identified roles in connecting habitat patches and sheltering native wildlife, it is important to encourage this traditional style of agriculture, Jha and Dick said.

The project was supported by the Helen Olson Brower Fellowship at the University of Michigan and by the National Science Foundation.