Self-fertilizing plants contribute to their own demise

TORONTO, ON – Many plants are self-fertilizing, meaning they act as both mother and father to their own seeds. This strategy – known as selfing – guarantees reproduction but, over time, leads to reduced diversity and the accumulation of harmful mutations. A new study published in the scientific journal Nature Genetics shows that these negative consequences are apparent across a selfing plant’s genome, and can arise more rapidly than previously thought.

In the study, an international consortium led by Stephen Wright in the Department of Ecology and Evolutionary Biology at the University of Toronto and Detlef Weigel at the Max Planck Institute for Developmental Biology sequenced the genome of the plant species Capsella rubella, commonly known as Red Shepherd’s Purse. They found clear evidence that harmful mutations were accumulating over the species’ relatively short existence.

“The results underscore the long-term advantages of outcrossing, which is the practice of mating between individuals, that gives us the wide array of beautiful flowers,” said Wright. “Selfing is a good short-term strategy but over long timescales may lead to extinction.” 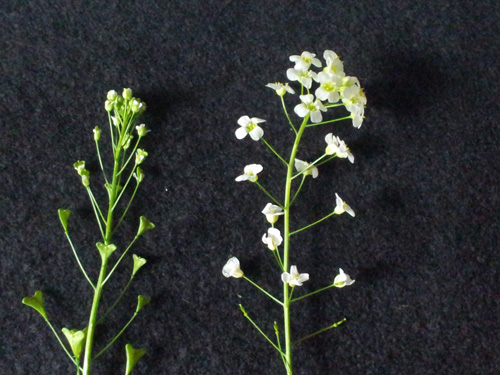 “Harmful mutations are always happening,” said Wright. “In crops, they could reduce yield just as harmful mutations in humans can cause disease. The mutations we were looking at are changes in the DNA that change the protein sequence and structure.”

The findings represent a major breakthrough in the study of self-fertilization.

“It is expected that harmful mutations should accumulate in selfing species, but it has been difficult to support this claim in the absence of large-scale genomic data,” says lead author Tanja Slotte, a past member of Wright’s research team and now a researcher at Uppsala University. “The results help to explain why ancient self-fertilizing lineages are rare, and support the long-standing hypothesis that the process is an evolutionary dead-end and leads to extinction.”

The researchers said that with many crops known to be self-fertilizing, the study highlights the importance of preserving crop genetic variation to avoid losses in yield due to mutations accumulating.

The findings are reported in the paper “The Capsella rubella genome and the genomic consequences of rapid mating system evolution” in Nature Genetics this week. Other lead collaborators on the study included researchers from the Max Planck Institute in Tübigen, Germany and the US Department of Energy’s Joint Genome Institute. The research is supported by funding from the US Department of Energy, the Max Planck Institute, Genome Canada and Genome Quebec.