AUSTIN, Texas — Seahorses are slow, docile creatures, but their heads are perfectly shaped to sneak up and quickly snatch prey, according to marine scientists from The University of Texas at Austin.

“A seahorse is one the slowest swimming fish that we know of, but it’s able to capture prey that swim at incredible speeds for their size,” said Brad Gemmell, research associate at the University of Texas Marine Science Institute, which is part of the College of Natural Sciences.

The prey, in this case, are copepods. Copepods are extremely small crustaceans that are a critical component of the marine food web. They are a favored meal of seahorses, pipefish and sea dragons, all of which are uniquely shaped fish in the syngnathid family.

Copepods escape predators when they detect waves produced in advance of an attack, and they can jolt away at speeds of more than 500 body lengths per second. That equates to a 6-foot person swimming under water at 2,000 mph.

“Seahorses have the capability to overcome the sensory abilities of one of the most talented escape artists in the aquatic world — copepods,” said Gemmell. “People often don’t think of seahorses as amazing predators, but they really are.” 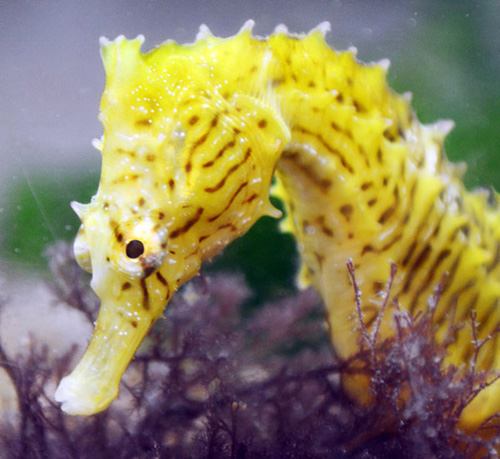 Dwarf seahorses like this one have a head shape that allows them to sneak up on sensitive prey before they can escape. Photo provided by Brad Gemmell.

In calm conditions, seahorses are the best at capturing prey of any fish tested. They catch their intended prey 90 percent of the time. “That’s extremely high,” said Gemmell, “and we wanted to know why.”

For their study, Gemmell and his colleague Ed Buskey, professor of marine science, turned to the dwarf seahorse, Hippocampus zosterae, which is native to the Bahamas and the U.S. To observe the seahorses and the copepods in action, they used high-speed digital 3-D holography techniques developed by mechanical engineer Jian Sheng at Texas Tech University. The technique uses a microscope outfitted with a laser and a high-speed digital camera to catch the rapid movements of microscopic animals moving in and out of focus in a 3-D volume of liquid.

Other small fish with blunter heads, such as the three-spined stickleback, have no such advantage.

Gemmell said that the unique head shape of seahorses and their kin likely evolved partly in response to pressures to catch their prey. Individuals that could get very close to prey without generating an escape response would be more successful in the long term.

“It’s like an arms race between predator and prey, and the seahorse has developed a good method for getting close enough so that their striking distance is very short,” he said.

Seahorses feed by a method known as pivot feeding. They rapidly rotate their heads upward and draw the prey in with suction. The suction only works at short distances; the effective strike range for seahorses is about 1 millimeter. And a strike happens in less than 1 millisecond. Copepods can respond to predator movements in 2 to 3 milliseconds — faster than almost anything known, but not fast enough to escape the strike of the seahorse.

Once a copepod is within range of a seahorse, which is effectively cloaked by its head shape, the copepod has no chance.

Video of a dwarf seahorse catching a copepod in slow motion. Credit: The University of Texas at Austin

Gemmell said that being able to unravel these interactions between small fish and tiny copepods is important because of the role that copepods play in larger ecosystem food webs. They are a major source of energy and anchor of the marine food web, and what affects copepods eventually affects humans, which are sitting near the top of the web, eating the larger fish that also depend on copepods.

Gemmell, Buskey and Sheng published their research this week in Nature Communications.