Researchers from UCLA’s Jonsson Comprehensive Cancer Center have found that by administering a PET scan to individuals with soft-tissue sarcomas after just a single cycle of neoadjuvant chemotherapy, they can predict increased survival in these patients.

Prior research by this multidisciplinary team of physician-scientists had shown that a combined PET/CT scan using a glucose uptake probe called FDG allowed them to determine the pathologic response of patients’ tumors after the first dose of chemotherapy drugs. They then wondered if the patients who showed a significant PET response after the first round of chemotherapy also were surviving longer. 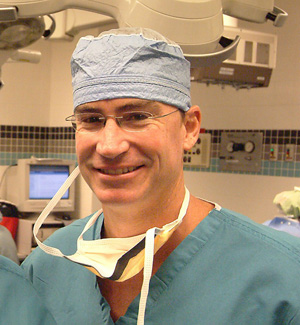 “We did find that patients who experienced an early PET response to treatment had significantly increased survival,” said the study’s senior author, Dr. Fritz Eilber, an associate professor of surgical oncology and director of the Jonsson Cancer Center’s sarcoma program. “This is vital because patients want to know if the drugs are working and what that says about their ultimate outcome.”

In the study, 39 patients with soft-tissue sarcoma underwent a PET scan to measure their tumor’s metabolism, or how much glucose was being taken up by the tumor, prior to getting chemotherapy. The patients were given another PET scan after the first round of chemotherapy.

Those whose tumors demonstrated a 25 percent or more decrease in metabolic activity — a response considered “significant” — were later determined to have significantly increased survival rates, compared with patients who had less than a 25 percent decrease, Eilber said.

“It’s an important finding because we can now identify whether patients are getting the right chemotherapy very quickly,” Eilber said. “Patients don’t want to have to wait until the cancer recurs or they die to find out whether their chemotherapy worked or not.”

Going forward, Eilber and his team are working to design new molecular imaging tools that may tell them even more about a patient’s cancer beyond the conventional FDG probe.

“Just looking at the size of the tumor is not good enough anymore,” Eilber said. “We want to image what’s happening within the tumor in real time.”

The study was funded by the In vivo Cellular and Molecular Imaging Center at UCLA’s Jonsson Comprehensive Cancer Center and the U.S. Department of Energy.

“This study suggests that PET allows survival predictions after the initial cycle of neoadjuvant chemotherapy and might therefore potentially serve as an early end-point biomarker,” the study states. “Such information cannot be derived from CT scanning based on serial tumor-size measurements. The ability to assess treatment response early during the course of therapy can potentially guide management decisions. Treatment could be switched from neoadjuvant chemotherapy to immediate surgery in non-responding patients, while it would be continued in responders. Such risk adapted therapy could reduce treatment associated morbidity and costs.”

(Read a feature on Eilber and his father, Dr. Frederick Eilber, a pioneer in sarcoma treatment and surgery.)