Human pluripotent stem cells, which can develop into any cell type in the body, rely heavily on glycolysis, or sugar fermentation, to drive their metabolic activities.

In contrast, mature cells in children and adults depend more on cell mitochondria to convert sugar and oxygen into carbon dioxide and water during a high energy–producing process called oxidative phosphorylation.

How cells progress from one form of energy production to another during development is unknown, but a study by UCLA stem cell researchers provides new insight into this transition, and the findings may have implications for using these cells for therapies in the clinic.

Scientists had assumed, based mostly on visual appearance, that pluripotent stem cells contained undeveloped and inactive mitochondria, which are the energy-producing power plants within cells that drive most cell functions. It was thought that stem cell mitochondria could not “respire” — that is, convert sugar and oxygen into carbon dioxide and water with the production of energy. This led most scientists to expect that mitochondria matured and acquired the ability to respire during pluripotent stem cells’ transition into differentiated body cells. 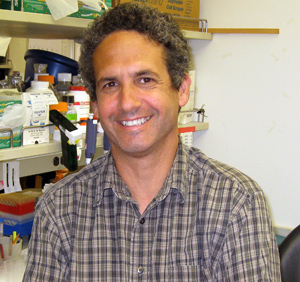 Surprisingly, the UCLA researchers discovered that pluripotent stem cell mitochondria respire at roughly the same level as differentiated body cells — but they produce very little energy, thereby uncoupling the consumption of sugar and oxygen from energy generation. Rather than finding that mitochondria matured with cell differentiation, as was anticipated, the researchers uncovered a mechanism by which the stem cells switch from glucose fermentation to oxygen-dependent respiration to achieve full differentiation potential.

The four-year study appears in the Nov. 15 issue of The EMBO Journal, a peer-reviewed journal of the European Molecular Biology Organization.

Dr. Michael Teitell, a researcher with the Eli and Edythe Broad Center of Regenerative Medicine and Stem Cell Research at UCLA and a professor of bioengineering, pediatrics, pathology and laboratory medicine, collaborated with Carla Koehler, a UCLA professor of chemistry and biochemistry, on the study.

Cells make energy in the form of adenosine triphosphate (ATP) in two main ways: by glucose uptake and fermentation in the cytoplasm or by using respiration, in which glucose and oxygen are consumed to make carbon dioxide and water to fuel cell functions. Teitell and his team expected that pluripotent stem cells could not respire because of prior reports on the immature appearance and the paucity of their mitochondria.

Teitell’s team found, however, that the molecular complexes responsible for respiration in the mitochondria of pluripotent stem cells — known as the electron transport chain — were functional. Yet the cells still relied on glycolysis for energy production. The researchers speculated that there were one or more unknown regulators that kept the stem cells from respiring, since the electron transport chain was functional.

Jin Zhang, a UCLA graduate student and first author of the study, discovered that a protein called uncoupling protein 2 (UCP2) was highly expressed in the stem cells. He also found that UCP2 blocked respiration substrates derived from sugar from gaining access to the mitochondria, instead shunting them to the glycolytic and biosynthesis pathways located in the cytoplasm. This inhibited the stem cells’ ability to respire as a method of generating energy.

The team found that as pluripotent stem cells were driven to develop into mature cell types, UCP2 expression was shut off, allowing respiration substrates to enter the mitochondria for energy generation and switching the cells from glycolysis to oxidative phosphorylation.

Manipulating UCP2 expression by keeping it switched on in differentiating cells disturbed the cells’ maturation, a finding that could make them unsuitable for clinical use and one that points to the importance of properly functioning metabolism for generating safe, high-quality cells.

“A main question that evolved during the study was whether it was the process of pluripotent stem cell differentiation that was altering the pattern of metabolism, or was it the change in the pattern of metabolism that altered the process of differentiation, a typical chicken-or-the-egg question,” Teitell said. “We overexpressed UCP2 in the stem cells and showed that metabolism patterns changed before markers of pluripotency or cell maturation changed, indicating that changes in metabolism affect changes in differentiation and not the other way around, at least for UCP2.

“This was important — to show causation for metabolic changes in driving the process of cell differentiation. However, it still leaves open the key question of exactly how manipulating cell metabolism controls cell differentiation, a question we are working hard to address.”

Since metabolism in pluripotent stem cells and cancer cells appears quite similar, Teitell said the finding could potentially be used to target UCP2 in malignant tumors that express it, of which there are many. Silencing UCP2 could force cancer cells to respire, which might impair their ability to grow quickly.