*Samples of rock, sediment from beneath the sea-floor help explain quakes like Japan’s*

New samples of rock and sediment from the depths of the eastern Pacific Ocean may help explain the cause of large, destructive earthquakes similar to the Tohoku Earthquake that struck Japan in mid-March.

Nearly 1,500 meters (almost one mile) of sediment cores collected from the ocean floor off the coast of Costa Rica reveal detailed records of some two million years of tectonic activity along a seismic plate boundary.

The expedition and IODP are funded in part by the National Science Foundation (NSF). 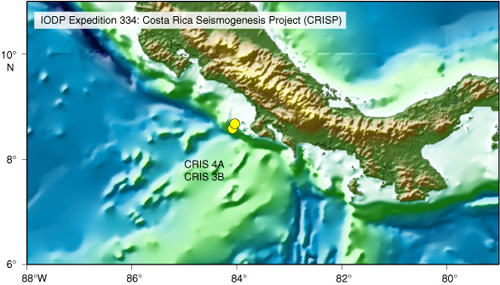 “It’s critical to understand how subduction zone earthquakes and tsunamis originate–especially in light of recent events in Japan,” says Rodey Batiza of NSF’s Division of Ocean Sciences. “The results of this expedition will also help us learn more about our own such zone off the Pacific Northwest.”

Participating scientists aim to use the samples to better understand the processes that control the triggering of large earthquakes at subduction zones, where one plate slides beneath another.

“We know that there are different factors that contribute to seismic activity–these include rock type and composition, temperature differences and how water moves within the Earth’s crust,” explained co-chief scientist Paola Vannucchi of the University of Florence in Italy, who led the expedition with co-chief scientist Kohtaro Ujiie of the University of Tsukuba in Japan.

Vannucchi added, “but what we don’t fully understand is how these factors interact with one another and if one may be more important than another in leading up to different magnitudes of earthquakes.

“This expedition provided us with crucial samples for answering these fundamental questions.” 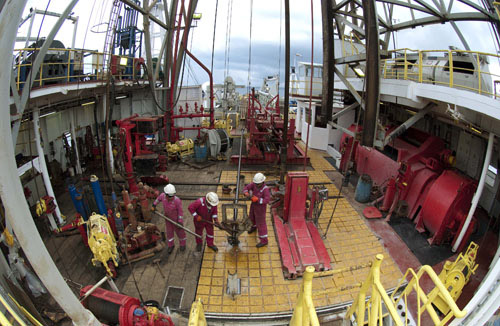 A view of the rig floor of the scientific drilling vessel JOIDES Resolution. Image credit: IODP

More than 80 percent of global earthquakes above magnitude 8.0 occur along subduction zones.

The Pacific Ocean is famous for these boundaries, known as convergent margins, which are found along the coasts of the East Pacific from Alaska to Patagonia, New Zealand, Tonga and Marianas–all the way to Japan and the Aleutians.

The margins of the world’s largest ocean basin are therefore a primary target for research into the triggering mechanisms of large quakes.

In a preliminary report published this month, CRISP scientists say that they have found evidence for a strong subsidence, or sinking, of the Costa Rica margin combined with a large volume of sediment discharged from the continent and accumulated in the last two million years. 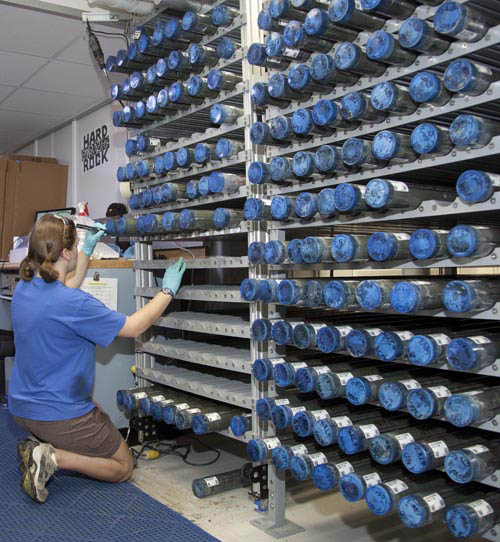 “The sediment samples provide novel information on different parameters which may regulate the mechanical state of the plate interface at depth,” said Ujiie.

“Knowing how the plates interact at the fault marking their boundary is critical to interpreting the behavior and frequency of earthquakes in the region.”

Vannucchi adds, “for example, we now know that fluids from deeper parts of the subduction zone system have percolated up through the layers of sediment.

“Studying the composition and volume of these fluids, as well as how they have moved through the sediment, helps us better understand the relationship between the chemical, thermal and mass transfer activity in the seafloor and the earthquake-generating, or seismogenic, region of the plate boundary.

“They may be correlated.” 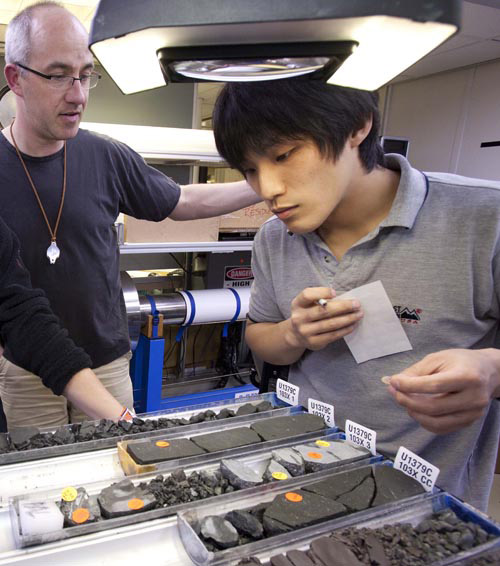 Members of the research party are currently analyzing cores from the CRISP Expedition at their home institutions.

The expedition is unique because it focuses on the properties of erosional convergent margins, where the overriding plate gets “consumed” by subduction processes

These plate boundaries are characterized by trenches with thin sediment covering less than 400 meters (1,312 feet), fast convergence between the plates at rates greater than eight centimeters per year, and increased seismicity.

The seismically active CRISP research area is the only one of its kind that is accessible to research drilling.

However, this subduction zone is representative of 50 percent of global subduction zones, making scientific insights gleaned here relevant to Costa Ricans and others living in earthquake-prone regions all around the Pacific Ocean.

The recent Tohoku Earthquake in Japan was generated in an erosive portion of the plate interface.

Other geoscience research drilling programs, such as IODP’s Nankai Trough Seismogenic Zone Experiment (NantroSEIZE), near the southeast coast of Japan, focus on accretionary margins, where the front part of the overriding tectonic plate is built up by the subduction processes, sometimes forming mountains, and the plate boundary input is trench material.

In these environments, the trench sediments are greater than 1,000 meters, or more than half a mile.

Accretionary margins are known for their large earthquakes, such as the 1964 Alaska and the 2004 Sumatra quakes.

Japan’s Nankai Trough was the center of two magnitude 8 earthquakes in 1944 and 1946.

The CRISP team hopes to return to the same drill site in the future to directly sample the plate boundary and fault zone before and after seismic activity in the region.

Changes observed may provide new insights into how earthquakes are generated.

The Integrated Ocean Drilling Program (IODP) is an international research program dedicated to advancing scientific understanding of the Earth through drilling, coring and monitoring the subseafloor.

The JOIDES Resolution is a scientific research vessel managed by the U.S. Implementing Organization of IODP (USIO).  Together, Texas A&M University, Lamont-Doherty Earth Observatory of Columbia University and the Consortium for Ocean Leadership comprise the USIO.

Additional program support comes from the European Consortium for Ocean Research Drilling, the Australian-New Zealand IODP Consortium, India’s Ministry of Earth Sciences, the Ministry of Science and Technology in the People’s Republic of China and the Korea Institute of Geoscience and Mineral Resources.