Why did life forms first begin to get larger and what advantage did this increase in size provide? UCLA biologists working with an international team of scientists examined the earliest communities of large multicellular organisms in the fossil record to help answer this question.

The life scientists used a novel application of modeling techniques at a variety of scales to understand the scientific processes operating in the deep sea 580 million years ago. The research reveals that an increase in size provided access to nutrient-carrying ocean flow, giving an advantage to multicellular eukaryotes that existed prior to the Cambrian explosion of animal life, said David Jacobs, a professor of ecology and evolutionary biology in the UCLA College of Letters and Science and senior author of the research. 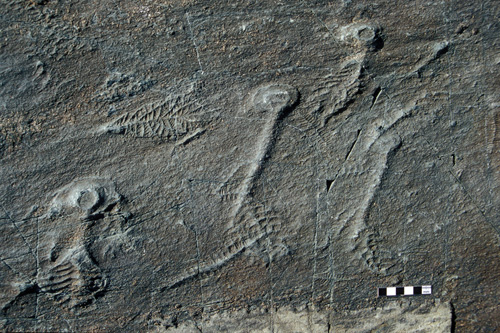 The study findings are published Jan. 23 in the journal Current Biology.

A multidisciplinary research team reconstructed ocean flow in the fossil community using “canopy flow models,” a particular class of flow models consistent with the dense spacing of organisms on the ancient seabed.

The research was inspired by the NASA Astrobiology Institute’s “Foundations of Complex Life” meeting in Newfoundland, Canada, where the oldest known fossil communities of large, multicellular organisms — collectively called rangeomorphs — are found on rock surfaces exposed along the coast. These feather- or brush-shaped creatures ranged in size from several millimeters to tens of centimeters in height.

The scientists addressed the absorption properties of the rangeomorphs’ surfaces based on the model’s results. These rangeomorphs could not photosynthesize because they lived in the extreme depths, where light did not penetrate, Jacobs said. Their complex surfaces suggest that they absorbed dissolved nutrients directly from the water — which raises the question of how rangeomorphs competed with bacteria, which also specialize in absorbing nutrients from seawater. 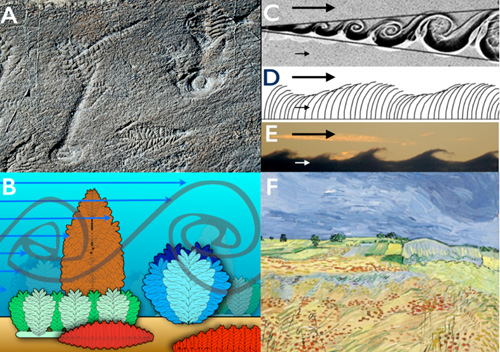 Canopy flow and rangeomorph communities. A: Bedding plane, at Mistaken Point, Newfoundland, showing the preservation of rangeomorph taxa. B: Schematic of the reconstructed community showing the velocity gradient (blue arrows) and large Kelvin-Helmholtz vortices. C: Kelvin- Helmholtz vortices visualised at the boundary between parallel flows of different velocity. D: The waving of a vegetated canopy produced by Kelvin-Helmholtz vortices. E: Kelvin-Helmholtz Vortices produced in a cloud layer. Arrows in C-E indicate the relative velocity of flow. F: ‘The Fields’ by Vincdent van Gogh was among a number of his paintings inspired by Kelvin-Helholtz behavior of fields and clouds. Image credit: Current Biology

Understanding what advantages rangeomorphs gained over bacteria by growing tall would provide scientists with insights into what drove the evolution of the first communities of large life forms in the fossil record, Jacobs said.

The scientists discovered that rangeomorphs had an advantage when they grew off the sea floor, as they were exposed to higher flow, generating much greater “nutrient uptake.”

The inducement to “grow upwards is a function of the canopy, which controls the velocity of ocean water as it moves through the rangeomorph community,” Jacobs said. “As individuals grow upwards, the properties of water flow change, which promotes further upward growth.”

Both the canopy-flow and surface-uptake models represent significant advances in scientists’ ability to understand the ecology of fossil and modern communities, Jacobs said. Such modeling may prove critical to understanding processes that affect ocean life today, such as coral bleaching, he said.

Co-authors of the research include David Gold, a UCLA graduate student in Jacobs’ laboratory; Roger Summons (MIT) and David Johnston (Harvard), who helped reconstruct the paleoceanography of this time; and Guy Narbonne (Queens University), Marc LaFlamme (University of Toronto) and Matthew Clapham (UC Santa Cruz), who contributed the paleontological data necessary to populate the model. Marco Ghisalberti of the University of Western Australia in Perth developed and conducted the modeling in collaboration with Jacobs and Gold, who developed the paleo-biomechanical conceptual models to be tested, assembled the research team and directed the research.

www.complex-life.org. For more on Jacobs’ research, visit his website. The research is funded by the NASA Astrobiology Institute.