On this July 4th week, U.S. beachgoers are thronging their way to seaside resorts and parks to celebrate with holiday fireworks. But across the horizon and miles out to sea toward the north, the Atlantic Ocean’s own spring and summer ritual unfolds. It entails the blooming of countless microscopic plants, or phytoplankton.

In what’s known as the North Atlantic Bloom, an immense number of phytoplankton burst into existence, first “greening,” then “whitening” the sea as one or more species take the place of others.

What turns on this huge bloom, what starts these ocean fireworks? Is it the Sun’s warmth? 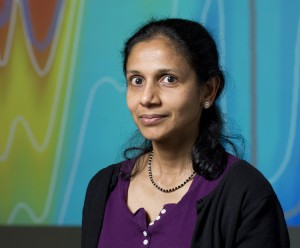 Lead author WHOI physical oceanographer Amala Mahadevan with model results that show how eddies cause the layering of light water on top of heavy water in the North Atlantic that traps phytoplankton in the sunlit surface layer and leads to an early bloom. “Our research showed that the bloom started even before the warming of the ocean surface,” in fact, 2-3 weeks earlier than previously theorized, says Mahadevan. (Photo by Tom Kleindinst, Woods Hole Oceanographic Institution)

In research results published online July 5 in the journal Science, scientists report evidence of another trigger. Not sunlight, but whirlpools, or eddies, that swirl across the surface layer of the North Atlantic Ocean. These eddies sustain phytoplankton in the ocean’s shallower waters where they can get plenty of sunlight to fuel growth, thereby keeping them from being pushed downward by the vagaries of rough processes at the ocean surface.

How important is the bloom to the North Atlantic Ocean and beyond–to the global carbon cycle?

Springtime blooms of microscopic plants in the ocean absorb enormous quantities of carbon dioxide, much like our forests, emitting oxygen via photosynthesis. Their growth contributes to the oceanic uptake of carbon dioxide, amounting globally to about one-third of the carbon dioxide we put into the air each year through the burning of fossil fuels. An important question is how this “biological pump” for carbon might change in the future as our climate evolves.

The North Atlantic is critical to this process; it’s responsible for more than 20 percent of the ocean’s uptake of CO2.

In winter, cooling and strong winds generate mixing that pushes phytoplankton into deeper waters, robbing them of sunlight, but drawing up nutrients from depth. As winter turns to spring, days become longer. Phytoplankton are exposed to more sunlight, fueling their growth.

“Our results show that, due to eddies, the bloom starts even before the sun begins to warm the ocean,” says Amala Mahadevan, an oceanographer at the Woods Hole Oceanographic Institution (WHOI) in Massachusetts and lead author of the Science paper. Co-authors of the paper are Eric D’Asaro and Craig Lee of the University of Washington, and Mary Jane Perry of the University of Maine.

The research was funded by the National Science Foundation (NSF). 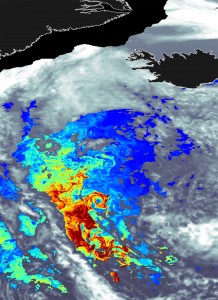 The satellite image, with eddies clearly visible, shows chlorophyll concentration in the North Atlantic during the spring phytoplankton bloom. Scientists have long known that widespread springtime blooms take up enormous quantities of carbon dioxide, creating organic matter and emitting oxygen. The North Atlantic is an especially crucial region, responsible for more than 20 percent of the entire ocean’s uptake of human-generated carbon dioxide. New understanding of the underlying physical mechanisms of the annual blooms allows them to be represented more accurately in global models of the oceanic carbon cycle and improves the models' predictive capability. (Image courtesy of Bror Jonsson, Princeton University, and MODIS satellite data, NASA)

“Every undergraduate who takes an introductory oceanography course learns about the ecological and climate significance of the North Atlantic Bloom – as well as what causes it,” says Don Rice, program director in NSF’s Division of Ocean Sciences, which funded the research. “This study reminds us that, when it comes to the ocean, the things we think we know hold some big surprises.”

The newly discovered mechanism helps explain the timing of the spring and summer bloom, known to mariners and fishermen for centuries and clearly visible in satellite images. It also offers a new look at why the bloom has a patchy appearance: it is shaped by the eddies that, in essence, modulate its formation.

Making the discovery was no easy feat. “Working in the North Atlantic Ocean is challenging,” says Perry, “but we were able to track a patch of seawater off Iceland and follow the progression of the bloom in a way that hadn’t been done before.”

“Our field work was set up with floats, gliders and research ships that all worked tightly together,” says D’Asaro. “They were in the same area, so we could put together a cohesive picture of the bloom.”

In the study, the scientists focused on phytoplankton known as diatoms. Diatoms live in glass houses—walls made of silica. “When conditions are right, diatoms blooms spread across hundreds of miles of ocean,” says Lee, “bringing life-sustaining food to sometimes barren waters.”

In April, 2008, Lee, Perry and colleagues arrived in a storm-lashed North Atlantic aboard the Icelandic research vessel Bjarni Saemundsson. They launched specially designed robots in the rough seas. A float that hovered below the water’s surface was also deployed. It followed the motion of the ocean, moving around, says D’Asaro, “like a giant phytoplankton.”

Lurking alongside the float were six-foot-long, teardrop-shaped gliders that dove to depths of up to 1,000 meters. After each dive, the gliders, working in areas 20 to 50 kilometers around the float, rose to the surface, pointed their antennas skyward and transmitted their stored data back to shore.

The float and gliders measured the temperature, salinity and velocity of the water, and gathered information about the chemistry and biology of the bloom itself—oxygen, nitrate and the optical signatures of the phytoplankton.

In total, scientists aboard two ships, the WHOI-operated research vessel Knorr and the Bjarni Saemundsson, visited the area four times.

Soon after the measurements from the floats and gliders started coming in, the scientists perceived that the bloom had started even though surface conditions still looked winter-like. “It was apparent that some new mechanism, other than surface warming, was behind the bloom initiation,” says D’Asaro. 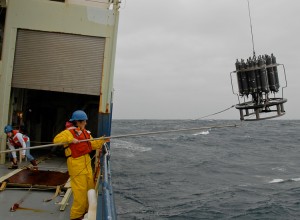 University of Maine oceanographer Emily Kallin guides the CTD (an underwater instrument package) and water-sampling bottles back to the deck of the research vessel Knorr. In the spring of 2008, researchers used two research vessels, heavily instrumented underwater floats and long-range ocean gliders, and satellite data to chronicle the bloom’s evolution from start to finish. Mahadevan relied on the data to do the three-dimensional, computer-generated modeling. (Photo courtesy Dane Wojcicki, University of Maine)

Enter Mahadevan, who then used three-dimensional computer modeling to look at information collected at sea by Perry, D’Asaro and Lee.

She generated eddies in the model from a south-to-north variation of temperature in the ocean. Without these, the bloom happened several weeks later, and didn’t have the space and time structures observed in the North Atlantic.

In future research, the scientists hope to put the North Atlantic Bloom into a broader context. “We could learn a lot from following its evolution across an entire year with gliders and float outfitted with new sensors to look at the zooplankton that graze on a smorgasbord of phytoplankton. This data could be integrated with a suite of physical-biological models to unfold a more complete story” say the scientists.

“We envision using the gliders and float to make measurements—and models—of ocean physics, chemistry and biology,” says D’Asaro, “that span wide regions of the world ocean.”

And that, says Lee, would spark a new understanding of the sea, all from a tiny plankton that each spring and summer blooms by the millions and millions. 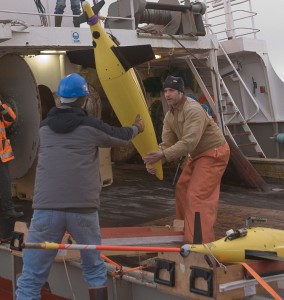 Engineers Michael Ohmart and Adam Huxtable prepare to launch an underwater Seaglider from R/V Bjarni Saemundssonm. “The experiment was set up so that the float, gliders, and ships tightly worked together,” says co-author Eric D’Asaro of the University of Washington. “The ships spent a lot of time going close to the float and gliders, and calibrating them, and making other measurements in the same area so we could put together a coherent picture.” (Photo courtesy Eric Rehm, University of Washington)