Scientists from UH Mānoa’s School of Ocean and Earth Science and Technology (SOEST) recently discovered that land-based plant material and coastal macroalgae indirectly support the increased abundances of bottom fish in submarine canyons, like those off the north shore of Moloka’i. Less than a few miles from the shore, these underwater canyons connect to deep river valleys that cut across the landscape of north Moloka’i. The high elevation and forested landscapes along Moloka’i’s north shore provide plant material, including decomposing tree trunks, leaves and tons of kukui nuts, which enter the ocean via river valleys and “pile up” on submarine canyon floors. 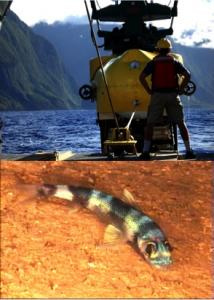 “In areas surrounded by very low productivity waters, this steady supply of organic matter to the canyons supports relatively high abundances of macro-invertebrates that live associated with the seafloor (either on top or in the top layers within the sediments), such as polychaete worms (related to earth worms), tiny crustaceans (amphipods, tanaids and isopods) and mollusks (like tiny clam- and snail-like creatures). Those invertebrates in turn serve as food for many fish species that live and feed near the seafloor,” said Fabio De Leo, lead author and PhD candidate at the UH Mānoa Department of Oceanography.

He added that areas surveyed outside the canyons showed very little contribution of plant and macroalgae material, providing support for the team’s hypothesis that this material is really being channeled and accumulates mostly in the steep topography of the submarine canyons (i.e., a “canyon effect”).

De Leo, his PhD advisor (Dr. Craig Smith), and colleagues from SOEST (Dr. Jeff Drazen), Hawai‘i Pacific University (Dr. Eric Vetter), and the New Zealand National Institute of Water and Atmospheric Research (Dr. Ashley Rowden) used manned submersibles operated by the Hawai‘i Undersea Research Laboratory to perform numerous video transects in two submarine canyons off Moloka’i at depths ranging from 350 to 1,050 meters (approximately 1,000 to 3,000 feet). Equipped with high-definition cameras and powerful light strobes, the submersibles flew above the seafloor to quantitatively assess the presence of plant and macroalgae material and to count and identify all fish species (see Figure). This was among the first studies to quantitatively survey fish assemblages deeper than approximately 350 meters around Hawai‘i, gathering more than 13 hours of video altogether.

Among the most abundant species found were the so-called “rattail” fishes (family Macrouridae) and the “eel-like” fishes (synaphobranchids and halosaurs). Giant shark specimens were also observed but only when the submersible was stationary and not during the video transects. Therefore, those species were not included in the quantitative analysis. De Leo narrates how scary it was when he got “face–to-face” with a 10-foot “sixgill shark” with only the submersible’s porthole separating his from the shark’s nose, as the giant approached the submersible and hit the thick glass window with its face. Said De Leo, “Wow, it was definitely a nerve-wracking sensation. I even dropped my video camera while trying to make good footage of the beast.”

The researchers also report some unexpected results. They found that this “canyon effect” of enhancing fish abundances is obliterated at intermediate depths (around 650 meters) coinciding exactly with the core of an oxygen minimum zone (OMZ) that flows around the Hawaiian archipelago around those depths. An OMZ is a layer of seawater usually at subsurface that has depleted oxygen concentrations due to several biological and chemical processes, including excess respiration by microbes. This may indicate that the bottom fish species are somewhat sensitive to the low oxygen concentrations in the water. This result corroborates previous studies that found low abundances and diversity of deep-sea scavenger animals at similar depths around Hawai‘i. De Leo noted that the expansion of OMZs in different parts of the oceans is of great concern among oceanographers, and it is thought to be one of the main effects related to climate/ocean warming.

De Leo attended the annual Ocean Sciences Meeting in Salt Lake City, Utah, last week and reported that the expansion of these low oxygen ocean layers was one of the hot topics discussed at the meeting. “We should definitely keep track of near future and long term effects of expansion of low oxygen zones and how this will affect a variety of marine organisms, including fish,” he noted.

In hopes of understanding what other factors lead to an increase in the number and diversity of marine animals inside these abrupt topographic features, De Leo and his colleagues are analyzing data on the abundance and diversity of macro-invertebrates that live in relation with the seafloor in six other submarine canyons around Hawai‘i. There is an increasing body of evidence that suggests that canyons are a special type of topographic feature in the seafloor no matter in what oceanographic background they are located (i.e., highly productive continental margins or in a low productivity setting, such as an island margin like Hawai‘i).

“With the goal of protecting ecologically important habitat and preserving biodiversity, this information is crucial when performing marine spatial planning and designing networks of Marine Protected Areas,” said De Leo.

This research was supported by NOAA Ocean Exploration and by the Hawai‘i Undersea Research Laboratory.

*Source: University of Hawaiʻi at Mānoa