Paleontologists have discovered that a group of remarkable ancient sea creatures existed for much longer and grew to much larger sizes than previously thought, thanks to extraordinarily well-preserved fossils discovered in Morocco.

The creatures, known as anomalocaridids, were already thought to be the largest animals of the Cambrian period, known for the “Cambrian Explosion” that saw the sudden appearance of all the major animal groups and the establishment of complex ecosystems about 540 to 500 million years ago. Fossils from this period suggested these marine predators grew to be about two feet long. Until now, scientists also thought these strange invertebrates-which had long spiny head limbs presumably used to snag worms and other prey, and a circlet of plates around the mouth-died out at the end of the Cambrian.

Now a team led by former Yale researcher Peter Van Roy (now at Ghent University in Belgium) and Derek Briggs, director of the Yale Peabody Museum of Natural History, has discovered a giant fossilized anomalocaridid that measures one meter (more than three feet) in length. The anomalocaridid fossils reveal a series of blade-like filaments in each segment across the animal’s back, which scientists think might have functioned as gills. 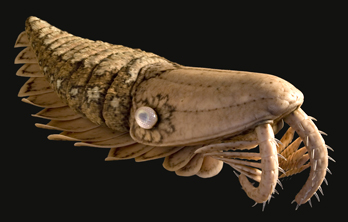 Anomalocaridids had long, spiny head limbs presumably used to snag prey, and a series of blade-like filaments across their backs, which may have functioned as gills. Image credit: Esben Horn

In addition, the creature dates back to the Ordovician period, a time of intense biodiversification that followed the Cambrian, meaning these animals existed for 30 million years longer than previously realized.

“The anomalocaridids are one of the most iconic groups of Cambrian animals,” Briggs said. “These giant invertebrate predators and scavengers have come to symbolize the unfamiliar morphologies displayed by organisms that branched off early from lineages leading to modern marine animals, and then went extinct. Now we know that they died out much more recently than we thought.”

The specimens are just part of a new trove of fossils from Morocco that includes thousands of examples of soft-bodied marine fauna dating back to the early Ordovician period, 488 to 472 million years ago. Because hard shells fossilize and are preserved more readily than soft tissue, scientists had an incomplete and biased view of the marine life that existed during the Ordovician period before the recent discoveries in Morocco. The animals found in Morocco inhabited a muddy sea floor in fairly deep water, and were trapped by sediment clouds that buried them and preserved their soft bodies. 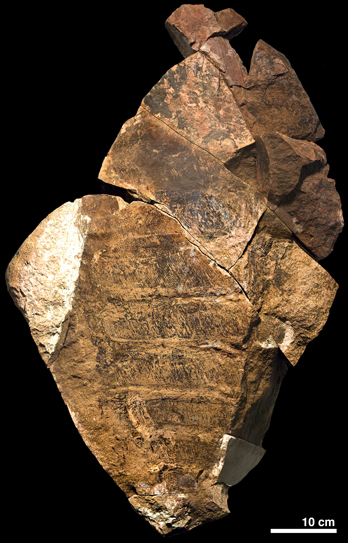 The anomalocaridid fossil shows this ancient sea predator existed for much longer and grew to much larger sizes than previously thought. Image credit: Peter Van Roy

“The new discoveries in Morocco indicate that animals characteristic of the Cambrian, such as the anomalocaridids, continued to have a considerable impact on the biodiversity and ecology of marine communities many millions of years later,” Van Roy said.

The paper appears in the May 26 issue of the journal Nature.

A video of Derek Briggs discussing the fossils, along with a model of the anomalocaridid creature, is available here.

This research was supported by a National Geographic Society Research and Exploration grant and by Yale University.