*Berkeley Lab joint report offers a variety of scenarios to reduce emissions to 80% below 1990 levels.*

Berkeley, CA — In the next 40 years, California’s population is expected to surge from 37 million to 55 million and the demand for energy is expected to double. Given those daunting numbers, can California really reduce its greenhouse gas emissions to 80 percent below 1990 levels by 2050, as required by an executive order? Scientists from Lawrence Berkeley National Laboratory who co-wrote a new report on California’s energy future are optimistic that the target can be achieved, though not without bold policy and behavioral changes as well as some scientific innovation.

The first 60 percent in emissions reductions can be realized with currently available technology, the report finds. “California can achieve emissions roughly 60 percent below 1990 levels with technology we largely know about today if such technology is rapidly deployed at rates that are aggressive but feasible,” the report says. 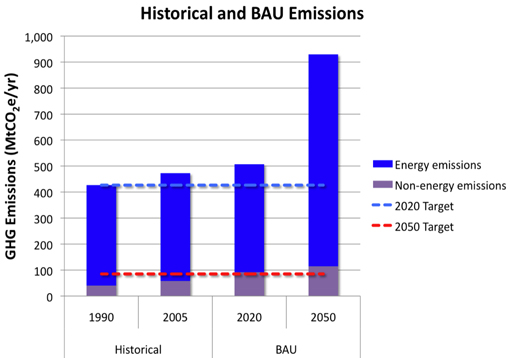 If California continues "business as usual" (BAU), or without any additional energy-savings measures, greenhouse gas emissions in 2050 are expected to nearly double those in 2005, to more than 900 metric tons carbon dioxide equivalent. Image Credit: Jeff Greenblatt

The remaining 20 percent reduction in emissions will have to come from advancements in several technologies still in development, which may include artificial photosynthesis, fusion energy, more efficient and sustainable biofuels, hydrogen fuel, more effective CCS and advanced batteries for both vehicles and grid storage. Berkeley Lab scientists are actively pursuing research in all of these areas.

If no measures are taken, emissions will likely double by 2050 relative to 1990 levels. With efficiency alone—including more efficient buildings, industrial facilities and vehicles—emissions could be held to 20 percent over 1990 levels.

The report was sponsored by the California Council on Science and Technology and funded by the California Energy Commission, the S.D. Bechtel Foundation and the California Air Resources Board. Berkeley Lab researchers Jeff Greenblatt, Jim McMahon and Max Wei were significant contributors and collaborated with analysts from several other institutions including UC Davis, UC Berkeley, Stanford University, Caltech and the Electric Power Research Institute.

One of the report’s major findings is that the state will need a very different electricity system that is better able to balance supply and demand while integrating more renewable energy sources such as wind and solar, which are intermittent. “The grid as it currently stands is entirely unsustainable,” says Greenblatt. “We’re going to see a very different grid in 2050 than we have now.”

McMahon, head of the Energy Analysis Department in the Environmental Energy Technologies Division, explains: “We need either more storage on the grid—whether with batteries or compressed air or something else—or a very intelligent system that’s able to respond to what’s available. For example, since the wind tends to blow more at night, a smarter system would heat your water at night when you have the power and store that water, and not in the morning when everybody wants to take a shower.”

Reducing emissions will require efforts on both the supply and demand side of the energy equation. Faster development of California’s diverse array of renewable energy resources—wind, solar, biomass, geothermal, hydro and offshore marine energy—will be needed to ensure an adequate supply of clean electricity, the report says. The scientists calculated that wind power, for example, would have to grow at 7.5 percent annually and solar at 12 percent annually. The report also considered the impact on land use from scaling up such operations; it estimated that 1.3 percent of the state’s land area would have to be devoted exclusively to renewables. 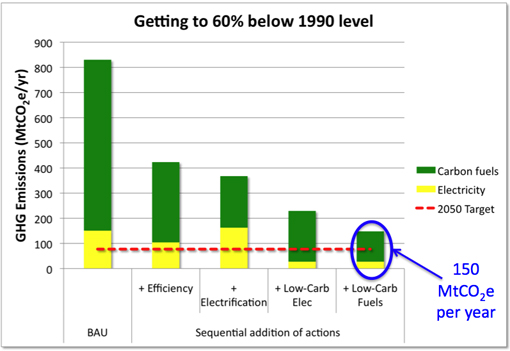 On the demand side, the report recommends aggressive efficiency measures, such as retrofitting 1.8 percent of all buildings every year starting now. “A lot of things have to start picking up speed this decade so that by 2020 we have significant momentum. We need to do work now for things to start to amplify,” Greenblatt says. And McMahon adds: “Cars and appliances last a long time, 15 to 20 years, and power plants and buildings even longer—50 years or more. That’s why we can’t wait. We don’t want to lock in inefficient things.”

While bold policy initiatives are likely needed to ensure that homeowners, industry and other players make the necessary changes, McMahon notes a silver lining: “The good news is efficiency has gotten less costly as we’ve gotten more experience with it.”

The report recommends simultaneously electrifying as much as possible by switching from fuels such as natural gas or petroleum to electricity. Uses that can be electrified include space heating, water heating, vehicles, domestic cooking and bus and rail fleets.

Another important component on the demand side is human behavior. Based on previously published studies suggesting changes in behavior can affect emissions by as much as 20 percent, the report assumed a 10 percent impact and listed a variety of possible changes. “It’s things like changing your diet, changing transportation to carpool more and use public transit, thermostat setbacks so you’re cooling or heating your house a little less, eco-driving—in Europe they’ve taught people how to drive more efficiently,” McMahon says. “If you had 10 percent of people telecommuting, you’d have 10 percent less traffic.”

The Berkelely Lab scientists find cause for optimism. Already, for example, Americans are eating less red meat than they did a generation ago, which is beneficial for the environment. “There’s portion of the population very interested in green living. I tend to think it’s generational—there are a lot of young people trying to figure out how to live more sustainably on the earth,” McMahon says. “So over time they may have more and more say over what we do.”