Scared of a Younger Rival? Not for Some Male Songbirds

COLUMBUS, Ohio — When mature male white-crowned sparrows duel to win a mate or a nesting territory, a young bird just doesn’t get much respect.

Researchers found that older male white-crowned sparrows don’t put much of a fight when they hear a young male singing in their territory – probably because the older bird doesn’t consider the young rival much of a threat.

But a male sparrow will act much more aggressively if it hears a bird of the same age singing in a territory it claims as its own.

“These male sparrows assess an opponent’s fighting ability based on age.  And for a mature sparrow, a young male is just not going to scare them,” said Angelika Poesel, lead author of the study and curator of Ohio State University’s Borror Laboratory of Bioacoustics and the tetrapod division.

Poesel conducted the study with Douglas Nelson, associate professor of evolution, ecology and organismal biology at Ohio State and director of the Borror Lab.  Their results appear online in the journal Biology Letters. 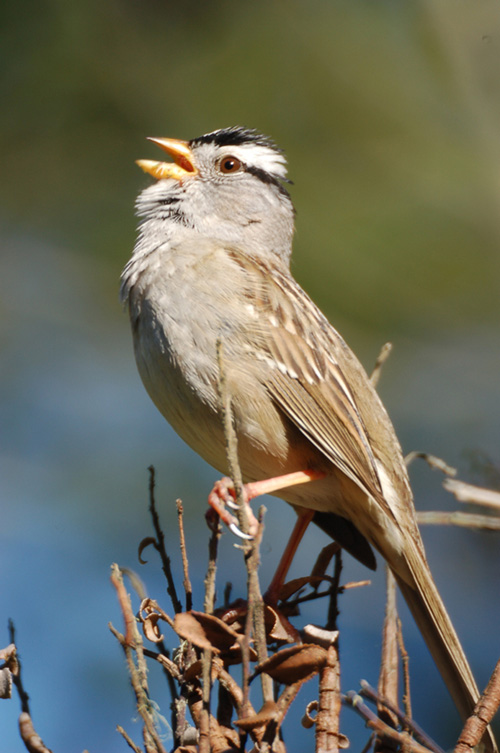 This study is one of the first to suggest that some birds use each other’s songs – and not just plumage – to help determine a potential rival’s age and thus threat level.

The researchers did the study in a migratory population of white-crowned sparrows that nested in a state park in Bandon, Oregon from 2008 to 2011.  The researchers have been studying this population since 2005.

A male white-crowned sparrow, like many bird species, uses its songs to claim a nesting territory, win an appropriate mate, and sometimes to find additional females to mate with.  Males will often attack and attempt to chase away other birds of the same species that sing in their territories.

That means older white-crowned sparrows can tell a youngster by the fact that it will sing more than one version of the species song.

In this study, the researchers mapped out territories of 16 male white-crowned sparrows – eight of which had held territories at the park in previous years (identified by bands placed on their legs in previous years) and eight second-year males that had never held a territory there before.

The researchers placed a loudspeaker within the birds’ territories and played recordings that suggested either a second-year bird or an older, mature bird had invaded their territory.

Several measures determined how threatened the birds were by what they perceived as an incursion into their territories.

If the male perceives the bird they hear as a greater threat, it will approach the loudspeaker more closely (to confront the rival), take more flights toward the speaker, and sing more songs.

“Other research suggests that younger male birds are less successful at attracting females than older males.  That means older males see these young birds as little threat to them and not worth a lot of attention,” Poesel said.

“Another young male that is likely in search of a territory is seen as a strong threat and an equal competitor,” she said. “They will elicit a strong, aggressive response from another young bird.”

These findings suggest that some male songbirds use each other’s song as a way to conduct a “mutual assessment” of each other as a potential rival.

“There’s more likely to be a conflict when both of the birds see themselves as equal competitors,” Poesel said.

“White-crowned sparrows aren’t interested in picking a fight with another bird that is much stronger or weaker than themselves.”

The research was supported by a grant from the National Science Foundation.