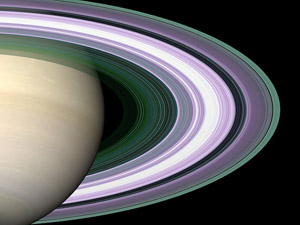 A new study conducted by scientists at the Southwest Research Institute in Boulder, Colorado, has this week posited that Saturn’s rings are the remnants of a massive moon that once orbited Earth’s distant neighbour.

According to study author and astronomer Robin Canup, the moon plunged into Saturn around 4.5 billion years ago due to a giant ring of hydrogen gas responsible for creating rocky satellites but also for dragging larger moons out of orbit.

The scientific theory centres on the predominantly icy composition of Saturn’s rings, The Tech Herald reports.

According to Discovery News, the theory neatly accounts for why Saturn’s rings are nearly pure ice, while most objects in that part of the solar system are more an ice-rock blend.

Planetary scientist Aurélien Crida, with the Université de Nice Sophia-Antipolis, France, notes that the stripped-off ice would have swirled in rings about 1,000 times more massive than what exist today.

“This elegant model could provide the missing links between a suite of observational and theoretical results that have changed our understanding of Saturn’s rings,” Crida writes in a review of the research in this week’s Nature.