ANN ARBOR, Mich. — A wave of reptile extinctions on the Greek islands over the past 15,000 years may offer a preview of the way plants and animals will respond as the world rapidly warms due to human-caused climate change, according to a University of Michigan ecologist and his colleagues.

The Greek island extinctions also highlight the critical importance of preserving habitat corridors that will enable plants and animals to migrate in response to climate change, thereby maximizing their chances of survival.

As the climate warmed at the tail end of the last ice age, sea levels rose and formed scores of Aegean islands that had formerly been part of the Greek mainland. At the same time, cool and moist forested areas dwindled as aridity spread through the region.

In response to the combined effects of a shifting climate, vegetation changes and ever-decreasing island size, many reptile populations perished. 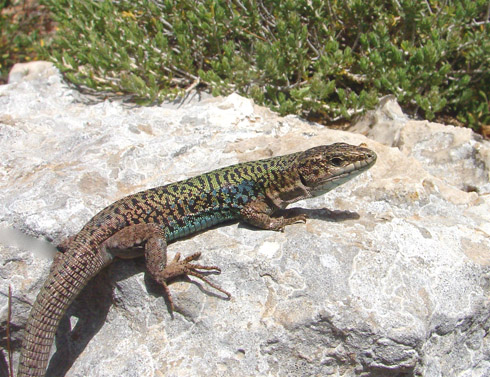 To gain a clearer understanding of the past consequences of climate change, Johannes Foufopoulos (foo FOP oo los) and his colleagues calculated the population extinction rates of 35 reptile species—assorted lizards, snakes and turtles—from 87 Greek islands in the northeast Mediterranean Sea. The calculated extinction rates were based on the modern-day presence or absence of each species on islands that were connected to the mainland during the last ice age. 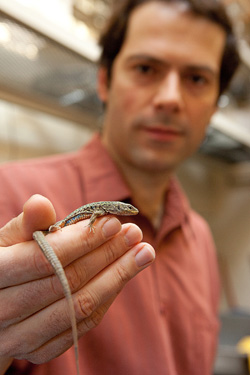 Foufopoulos and his colleagues found a striking pattern to the island extinctions. In most cases, reptile populations disappeared on the smallest islands first—the places where the habitat choices were most limited.

Especially hard hit were “habitat specialist” reptiles that required a narrow range of environmental conditions to survive. In addition, northern-dwelling species that required cool, moist conditions showed some of the highest extinction rates.

The study results appear in the January edition of American Naturalist.

The researchers conclude that a similar pattern of extinctions will emerge at various spots across the globe as the climate warms in the coming decades and centuries. In addition to adapting to a changing climate, plants and animals will be forced to traverse an increasingly fragmented natural landscape.

In many places, small chunks of natural habitat are now surrounded by vast, inhospitable expanses of agricultural and urbanized land, just as those newly formed Aegean islands were surrounded by rising seas thousands of years ago.

“The widespread fragmentation of natural habitats greatly exacerbates the effects of climate change and undermines the ability of species to adapt to the new conditions,” said Foufopoulos, an associate professor at the U-M School of Natural Resources and Environment and the Department of Ecology and Evolutionary Biology. 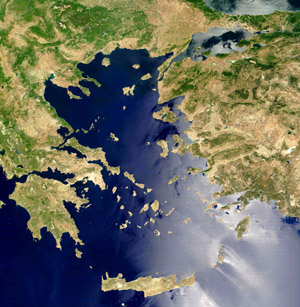 A satellite view of the Aegean Sea showing the Greek islands in the center, Greece on the left, Turkey on the right, and Crete at the bottom. Image credit: NASA

“The lessons learned from the wave of reptile extinctions suggest that if species are to survive the global climate shift already underway, not only do humans have to set significantly more land aside for conservation, but these protected areas will also need to be connected through a network of habitat corridors that allow species migration,” Foufopoulos said.

Over the last several decades, global warming has resulted in a poleward shift in the range of many birds, butterflies and other creatures. This shift to cooler climes—northward in the Northern Hemisphere and southward in the Southern Hemisphere—is expected to continue in the future as organisms seek out places where temperature and moisture levels permit their survival.