The last large populations of the leatherback turtle are at risk because their migratory routes in the Atlantic Ocean clash with the locations of industrial fisheries, a new study shows.

Researchers used data from satellite transmitters attached to the turtles to track their movements across the Atlantic Ocean. These movements were then overlapped with information on high pressure fishing areas to identify where the turtles are most susceptible to becoming entangled and where they may drown.

The international study, jointly led by Dr Matthew Witt of the University of Exeter and Dr Sabrina Fossette of Swansea University, found that urgent international efforts are needed to protect the iconic species. 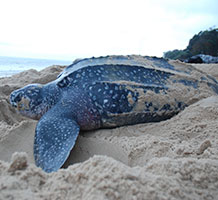 More than four billion hooks were set throughout the entire Atlantic Ocean between 1995 and 2010. Image credit: Phil Doherty

Between 1995 and 2010, a total of 106 leatherback turtles were satellite-tracked in the Atlantic and south-west Indian Oceans. Resulting information was interpreted along with knowledge on longline fishing effort and nine areas with the highest risk of bycatch were identified.

Maps of the turtles’ daily locations revealed that Atlantic leatherbacks use both deep sea international waters (more than 200 nautical miles from land) and coastal national waters, either seasonally or year-round, in a complex pattern of habitat use.

More than four billion hooks were set throughout the entire Atlantic Ocean by industrial fisheries between 1995 and 2010 – equivalent to 730,000 hooks per day.

Dr Witt, of the Environment and Sustainability Institute at the University of Exeter’s Penryn Campus in Cornwall, said: “This study clearly stresses the transboundary nature of leatherback turtle seasonal movement and the multi-national effort necessary to design measures to protect this iconic species from fisheries activity. Significant efforts are urgently needed to bridge the gap between scientists and the fishing industry to ensure these and future findings are rapidly progressed into policy.”

The study, published today in Proceedings of the Royal Society B, shows that of the nine areas of high susceptibility for leatherbacks, four are in the North Atlantic and five in the South/Equatorial Atlantic.

Some of these areas are on the high seas, but they also fall within the Exclusive Economic Zones (the coastal water and sea bed around a country’s shores to which it claims exclusive rights for fishing, oil exploration and so on) of the UK, USA,  Cape Verde, Gambia, Guinea Bissau, Mauritania, Senegal, Spain, Western Sahara, Angola, Brazil and Namibia.

Leatherbacks from the north Atlantic regularly use UK national waters, particularly during our summertime, whereas those from the south Atlantic move through UK overseas territorial waters of Ascension Island and Saint Helena during March to May while they migrate towards South America.

Professor Brendan Godley from the Centre for Ecology and Conservation at the University of Exeter’s Penryn Campus in Cornwall is the senior author of the paper and co-founder of web based tools on the website Seaturtle.org, which facilitated this multinational study involving 12 countries from four continents. He said:  “The integration of these vast datasets clearly highlights areas where fisheries need to be subject to greater scrutiny. We must avoid the tragedy that could ensue where fisheries from wealthy nations negatively impact the marine biodiversity of developing nations, many of which are valiantly trying to protect their coastal and offshore environments.”

The article, ‘Pan-Atlantic analysis of the overlap of a highly migratory species, the leatherback turtle, with pelagic longline fisheries,’ is published in Proceedings of the Royal Society B.