Sampling the Pacific for Signs of Fukushima

An international research team is reporting the results of a research cruise they organized to study the amount, spread, and impacts of radiation released into the ocean from the tsunami-crippled reactors in Fukushima, Japan. The group of 17 researchers and technicians from eight institutions spent 15 days at sea in June 2011 studying ocean currents, and sampling water and marine organisms up to the edge of the exclusion zone around the reactors.

Led by Ken Buesseler, a senior scientist and marine chemist at the Woods Hole Oceanographic Institution (WHOI), the team found that the concentration of several key radioactive substances, or radionuclides, were elevated but varied widely across the study area, reflecting the complex nature of the marine environment. In addition, although levels of radioactivity in marine life sampled during the cruise were well below levels of concern for humans and the organisms themselves, the researchers leave open the question of whether radioactive materials are accumulating on the seafloor sediments and, if so, whether these might pose a long-term threat to the marine ecosystem. The results appear in the April 2 online edition of the journal Proceedings of the National Academy of Sciences (PNAS). 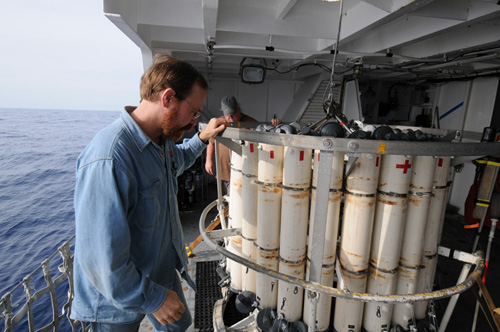 “Our goal was to provide an independent assessment of what the Japanese were reporting and also to get further off shore to sample in places where we thought the currents would be carrying most of the radionuclides,” said Buesseler. “We also wanted to provide as wide ranging a look as possible at potential impacts on the marine system to give a better idea of what was going on in the region, but also to provide a stronger baseline from which to measure future changes.”

On March 11, 2011, a magnitude 9.0 earthquake caused a tsunami that devastated the northeast coast of Japan and severely damaged the Fukushima Dai-ichi Nuclear Power Plant. In the weeks following, emergency crews poured tons of water directly onto the reactors to keep them cool and prevent them from going critical. Much of the contaminated water washed directly into the Northwest Pacific or collected in the basement of the reactor buildings and seeped slowly out, carrying with it a number of different radionuclides. In addition, several explosions in the reactor buildings sent additional radioactive materials into the atmosphere, much of which eventually landed in the ocean. 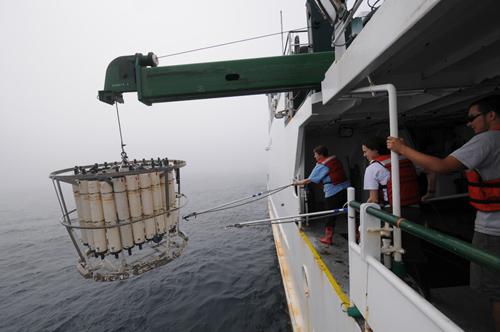 Among the materials released were cesium-134 and -137, two radioactive isotopes that do not occur naturally in the ocean. Cesium-134 has a half-life (the time it takes for one half of a given amount of radionuclide to decay) of a little over two years, and so could come only from the reactors at Fukushima. Cesium-137 has a half-life of roughly 30 years and is known to have entered the Pacific as a result of aboveground nuclear weapons tests in the 1950s and 60s, providing a benchmark against which to measure any additional releases from the reactors.

Buesseler, who began his scientific career studying the transport and mixing of artificial radionuclides in the ocean from sources such as weapons testing and the 1986 explosion at Chernobyl, recognized the importance of organizing an oceanographic research mission soon after events at Fukushima began to unfold. With primary support from the Gordon and Betty Moore Foundation and additional support from the National Science Foundation, he brought together an international group that included physical oceanographers Steven Jayne and Irina Rypina, also from WHOI, and marine biologist Nicholas Fisher from the State University of New York (SUNY) Stony Brook. 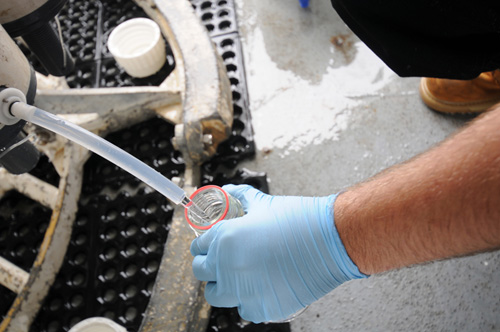 A crewmember on the R/V Ka'imikai-O-Kanaloa fills a sample bottle with water taken from beneath the surface off the northeast coast of Japan in June 2011. The team filled more than 1,500 sample bottles ranging from 50 milliliters to 20 liters that were later shipped to 16 labs in seven countries to be tested for the presence of more than a dozen radioactive isotopes. (Image credit: Ken Kostel, Woods Hole Oceanographic Institution)

The group departed Yokohama, Japan, on June 6 aboard the University of Hawaii research vessel Ka’imikai-o-Kanaloa and sailed a saw-tooth pattern that began 600 kilometers (350 miles) offshore and came as close as 30 kilometers (18 miles) from the damaged power plant. Along the way, the group conducted extensive water sampling from the surface to as deep as 1,000 meters (3,200 feet) and made more than 100 net tows to collect samples of phytoplankton, zooplankton, and small fish. They also released two dozen drifters, instruments that move with ocean currents and report their position via satellite back to shore.

In addition to their own samples, the group also collected water that they later shipped to labs at seven other institutions. Together, the ongoing effort is examining 15 different radionuclides likely to have been released from Fukushima. Their initial results, detailed in the PNAS paper indicate that the combined amount of radioactive material from the damaged power plant constitutes the largest accidental release of radiation to the ocean in history. 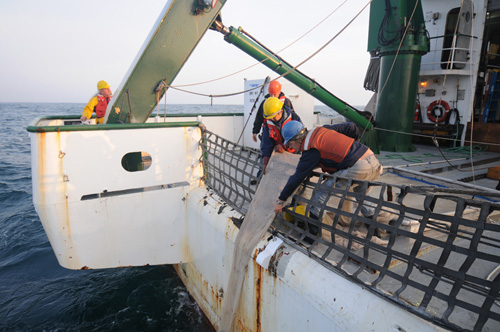 Jun Nishikawa (left, Univ. Tokyo) and Hannes Baumann (right, SUNY Stony Brook) retrieve a net to the stern of the R/V Ka'imikai-O-Kanaloa in June 2011 off the northeast coast of Japan. The crew made more than 100 net tows of various size during the cruise to sample organisms ranging from small fish to phytoplankton. (Image credit: Ken Kostel, Woods Hole Oceanographic Institution)

Despite this, analysis of samples from the study site show that the amount of radiation in the ocean fell well below EPA standards that would deem it unsafe to use as drinking water. “We knew that the radionuclides had to be moving off shore very rapidly once they entered the water,” said Buesseler. “Once they did, they quickly dispersed across a wide area and began mixing into the deeper layers of the ocean.”

In addition, they found that concentrations of cesium isotopes varied widely from station to station. Data from the drifters helped shed more light on this. First, the region is dominated by the Kuroshio, a large, fast current much like the Gulf Stream that flows north near the coast of Japan before turning east along the shore of the Chiba Peninsula. At the same time, a smaller, nutrient-rich current known as the Oyashio flows south along the northeast coast and mixes with the Kuroshio offshore from Fukushima. 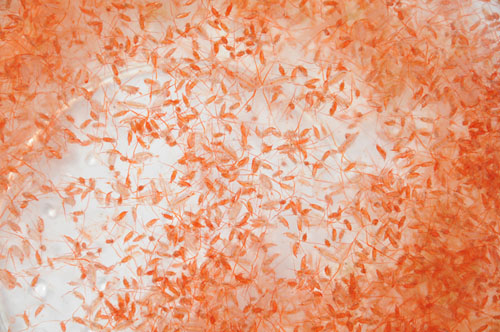 A sample of copepods taken during a June 2011 cruise aboard the R/V Ka'imikai-O-Kanaloa off the northeast coast of Japan. Later analysis found radiation in biological samples to be below what is generally considered harmful to marine animals and human consumers, and even below levels from naturally occurring sources of marine radiation. (Image credit: Ken Kostel, Woods Hole Oceanographic Institution)

As if to underscore that complexity, the group found that the Kuroshio acted as a barrier that prevented the movement of radionuclides to the south. In addition, they found the highest levels of radiation not in samples taken within sight of the reactors, but in those taken much further south along the coast of Ibaraki. The drifter tracks later revealed that an eddy, a swirling mass of water that sometimes breaks off from strong currents like the Kuroshio, had formed in the area and hugged the coast, likely drawing in contaminated water and maintaining higher concentrations of radionuclides.

As a result, radiation levels in the eddy were as much as 1,000 times higher than those before the start of the accident, but these remained well below levels of concern for humans and marine organisms and were approximately one-sixth the level of radiation that marine organisms receive from naturally occurring radionuclides such as potassium-40. 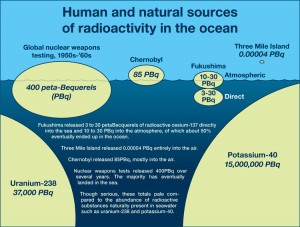 Samples of plankton and small fish confirmed this. Levels of cesium isotopes and another, faster-decaying isotope of silver found in the organisms collected during the cruise ranged from below detection level to levels that, while elevated, remained within standards set for human consumption.

“The radioactivity of the fish we caught and analyzed would not pose problems for human consumption,” said Fisher. “It does not mean all marine organisms caught in the region are perfectly safe to eat. That’s still an open question. There are still likely to be hot spots in sediments close to shore and closer to the power plant that may have resulted in very contaminated species in those areas. Further study and appropriate monitoring will help clarify this issue.” 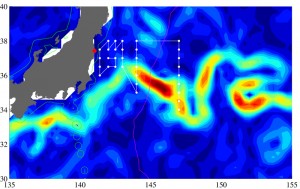 An international scientific team led by WHOI marine chemist Ken Buesseler completed a research cruises in June 2011 to assess the level and dispersion of radioactive substances from the Fukushima nuclear power plant and their potential impact on marine life. This map shows the sampling stations and cruise track near the Kuroshio Current (shown in yellow and red). Sampling began 400 miles offshore and passed within 20 miles of the nuclear complex. (Image credit: Steven Jayne, Woods Hole Oceanographic Institution)

Another open question is why radiation levels in the waters around Fukushima have not decreased since the Japanese stopped emergency cooling operations. According to Buesseler, it may be an indication that the ground surrounding the reactors has become saturated with contaminated water that is slowly seeping out in to the ocean. It may also be a sign that radionuclides in ocean sediments have become remobilized.

“What this means for the marine environment of the Northwest Pacific over the long term is something that we need to keep our eyes on,” said Buesseler. 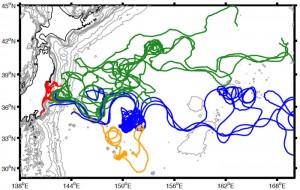 WHOI physical oceanographer Steven Jayne released two dozen surface drifters into the ocean during the cruise. The drifters transmitted their locations back to shore while they moved with ocean currents. Combined with data from radionuclides, color-coded track lines from individual drifters indicated that the powerful Kuroshio Current acted as both a highway and a barrier, carrying much of the radiation quickly away from shore while also largely preventing it from spreading south. (Image credit: Steven Jayne, Woods Hole Oceanographic Institution)