A Martian dust devil roughly 12 miles high (20 kilometers) was captured whirling its way along the Amazonis Planitia region of Northern Mars on March 14. It was imaged by the High Resolution Imaging Science Experiment (HiRISE) camera on NASA’s Mars Reconnaissance Orbiter. Despite its height, the plume is little more than three-quarters of a football field wide (70 yards, or 70 meters).

Dust devils occur on Earth as well as on Mars. They are spinning columns of air, made visible by the dust they pull off the ground. Unlike a tornado, a dust devil typically forms on a clear day when the ground is heated by the sun, warming the air just above the ground. As heated air near the surface rises quickly through a small pocket of cooler air above it, the air may begin to rotate, if conditions are just right.

The image was taken during late northern spring, two weeks short of the northern summer solstice, a time when the ground in the northern mid-latitudes is being heated most strongly by the sun. 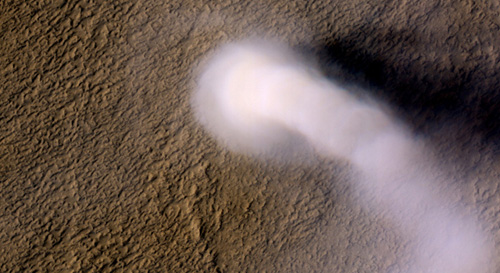 A Martian dust devil roughly 12 miles (20 kilometers) high was captured winding its way along the Amazonis Planitia region of Northern Mars on March 14, 2012 by the High Resolution Imaging Science Experiment (HiRISE) camera on NASA's Mars Reconnaissance Orbiter. Despite its height, the plume is little more than three-quarters of a football field wide (70 yards, or 70 meters). Image credit: NASA/JPL-Caltech/UA

The Mars Reconnaissance Orbiter has been examining the Red Planet with six science instruments since 2006. Now in an extended mission, the orbiter continues to provide insights into the planet’s ancient environments and how processes such as wind, meteorite impacts and seasonal frosts continue to affect the Martian surface today. This mission has returned more data about Mars than all other orbital and surface missions combined.

More than 21,700 images taken by HiRISE are available for viewing on the instrument team’s website: https://hirise.lpl.arizona.edu . Each observation by this telescopic camera covers several square miles, or square kilometers, and can reveal features as small as a desk.

HiRISE is operated by the University of Arizona, Tucson. The instrument was built by Ball Aerospace & Technologies Corp., Boulder, Colo. The Mars Reconnaissance Orbiter Project and the Mars Exploration Rover Project are managed by NASA’s Jet Propulsion Laboratory, Pasadena, Calif., for NASA’s Science Mission Directorate, Washington. JPL is a division of the California Institute of Technology in Pasadena. Lockheed Martin Space Systems, Denver, built the orbiter.

For more about the Mars Reconnaissance Orbiter, see https://www.nasa.gov/mro .