Joyce Hill Stoner, the Edward F. and Elizabeth Goodman Rosenberg Professor of Material Culture in the University of Delaware’s Department of Art Conservation, is an internationally respected scholar and paintings conservator who has a flair for showmanship as well.

Her latest entertainment production, an eight-minute musical in which the state of Delaware salutes YouTube, now is posted on that site for the world to see. Live for just a couple of days, the video already has attracted thousands of viewers. 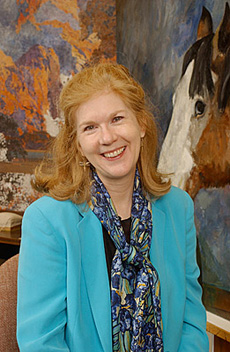 Stoner, who has created 22 musicals and several other plays about local history and the arts, is the writer, director and co-composer of “Delaware Salutes YouTube.” The mini-musical features a brief history of YouTube and crowd scenes shot in Wilmington, at a supermarket and the city train station.

Cast members with University connections include Scott Mason, a 1987 graduate who is associate director of student centers at UD, appearing in character as Dame Edna; Dana Herbert, a 1998 graduate and pastry chef who last year won the Next Great Baker reality TV competition; and Ron Whittington, a 1971 graduate and now special assistant to the dean in the College of Education and Human Development.

Stoner’s co-composer of music was James J. Weber, who also served as accompanist and arranger for the video, produced by Film Brothers Productions.