In a study in The New England Journal of Medicine, authors including biostatisticians from Brown report that coronary computed tomographic angiography (CCTA) is a safe way to screen patients coming to the ER with chest pains who are not at high risk for acute coronary syndrome. Patients who got CCTA and tested negative were more likely to be discharged home and spend less time at the hospital.

Coronary computed tomographic angiography (CCTA), a technology for diagnostic imaging of the heart, is a safe way to assess whether patients whose risk of heart attack is not high need to be hospitalized when they arrive at the emergency room complaining of chest pains. Brown biostatisticians led by Constantine Gatsonis are part of a team of researchers who report that finding in The New England Journal of Medicine and at the American College of Cardiology Conference March 26.

The study also found that patients who received CCTA were more likely to be discharged from the hospital and spent less time there compared to patients who received traditional care. Gatsonis, who directs the ACRIN Biostatistics Center at Brown, spoke with David Orenstein about the study’s design, what the results mean and what they don’t mean.

Gatsonis is the lead statistician in the study and the second author in the NEJM report. Biostatistician Brad Snyder is the third author, and biostatistician Erin Greco worked on the research as well. 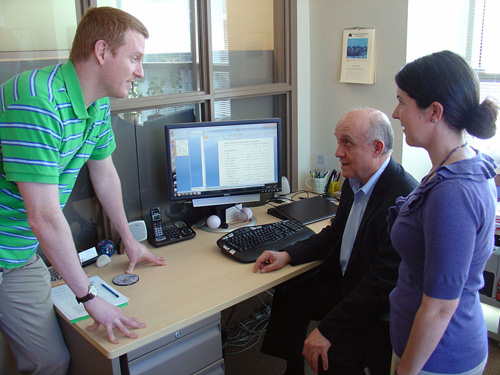 What conclusions are supported by the study data?

This study assessed the role of CCTA for patients with symptoms consistent with possible acute coronary syndrome who come into the emergency room. If such a patient is not considered to be at high risk but is still judged to be a candidate for admission or further workup, “rule-out” strategies are used decide what to do next. Our study says that for such patients a rule-out strategy which includes CT angiography is a safe way of proceeding. It also shows that patients who are worked up with the CCTA strategy are more likely to be discharged home and stay in the hospital for a shorter period of time compared to those who are worked up with the traditional care strategy.

What can doctors and patients be confident about based on these results?

ER patients who were eligible for the study were randomized to get the workup with CT angiography or the usual workup. The study design allowed us enough precision, enough statistical strength, to compare some outcomes, but not all outcomes.

The study’s answer to the question of safety is quite definitive. Here’s what safety means: Among the people who were judged to be eligible for this study and received a CT angiography that turned out to be negative, we did not observe any deaths or heart attacks in the next 30 days.

The study also answers other questions that are very important to patients. Those who are worked up with the CCTA strategy are more likely to be discharged home and spend less time at the hospital.

It is important to note that on the basis of this study, we do not have adequate information that would allow us to compare the two arms in terms of the rates of major cardiac events that happened in the first 30 days. The study was not powered adequately to compare these. In other words, this study does not say that death and major cardiac events are fewer with CT angiography than with regular care.

Compared to previous studies, how was this study designed to achieve that level of confidence?

As the Biostatistics Center for ACRIN we have primary responsibility for the statistical design of the study, the monitoring of the data, and the analysis of the results.

We approached the selection of sample size as a hypothesis testing question: “Does the rate of death and heart attacks within 30 days among those who had CT angiography and had a negative finding, exceed 1 percent?” We designed the study to have adequate sample size to reject this hypothesis, if the true rate is in fact below 1 percent. So when we say in the paper that we had 90 percent power, that means that we would have 90 percent probability to reject the hypothesis and conclude safety. There were previous reports that CCTA in the emergency room can be practiced safely but there was no study that could actually demonstrate that that proportion was really below what’s considered clinically important of 1 percent.

We also did a different kind of calculation that showed a study comparing the rates of death and major cardiac events between the two arms was not practical. The required numbers of patients would be in the thousands, just because these two rates are so small.

This is a “real-world” study. What does that mean?

The protocol was aimed at a pretty broad cohort of patients, so we didn’t have very picky inclusion criteria. The study was done in the emergency room setting, under the usual operating procedures of the emergency room.

The main thing we changed was that we randomized people to get a CT angiogram versus regular rule-out workup. The rest of it was in the usual flow of what happens in an ER.

Also, the study was done in several emergency rooms, with both inner-city and more rural representation.

What goes on at the ACRIN Biostatistics Center at Brown?

ACRIN is a national network that does multicenter studies of imaging for diagnosis and screening. ACRIN is headquartered in Philadelphia with the American College of Radiology. The Biostatistics Center is located at Brown. We do the statistical design, the monitoring and the analysis of studies. We work with our Data Management Center Philadelphia, which is responsible for the collection of the data.

We are involved in the scientific work that comes before a study as we design it, during the study, and then at the end of the study, when we analyze data and write the reports together with the medical investigators. ACRIN does a variety of studies. We are known for the big screening studies, such as screening for cancer, but this is our first study in cardiac disease.