Russian Dolls of the Bug World

Parasitic wasps using tiny insects known as aphids as living nurseries for their brood can sniff out whether the host insect is protected by symbiotic bacteria, researchers have discovered.

A research team including Martha (Molly) Hunter from the department of entomology in the University of Arizona’s College of Agriculture of Life Sciences has disentangled relationships in an assembly of players that resemble Russian dolls: a bacterium that lives inside a tiny insect, a virus that infects those bacteria, and a parasitic wasp that lays its eggs in the insect.

In a war between parasite and host, the parasitic wasp, Aphidius ervi, and the pea aphid, Acyrthosiphon pisum, are locked in a battle for survival. 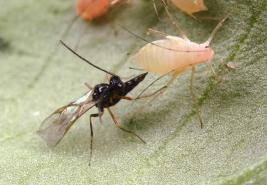 A parasitic Aphidius wasp descends on its victim: a pea aphid. The wasp thrusts its abdomen forward between the legs to inject an egg into the tiny insect. "It all happens in an instant," said Molly Hunter of the UA's department of entomology. (Photo: Alex Wild)

Hailing from Europe, the pea aphid hitchhiked to North America before the turn of the 20th century, where it spread as a pest of peas and related crops in the legume family. Later, the parasitic wasp was introduced as a biological pest control agent, in an effort to keep the pest in check.

The wasp, A. ervi, lays an egg inside the pea aphid, where the egg hatches and converts the aphid’s insides into a wasp nursery. The wasp larva uses the still-living aphid as a food source, eventually pupating inside the aphid and emerging as a fully formed mature wasp.

However, the pea aphid is not defenseless. It is protected by the bacterium Hamiltonella defense, and its associated bacteriophage called APSE. Bacteriophages are viruses that exclusively infect bacteria.

The bacteria with their incorporated phage float around in the aphid’s hemolymph, “the insect’s equivalent of blood” said Hunter, and also make their home in specialized cells provided by the aphid for the purpose of hosting their symbionts. In addition to conferring greater resistance to heat stress on the aphids, the main job of the bacteria and their phages appears to be protection against the parasitic wasps.

Although the wasps still lay their eggs inside aphids hosting the bacterial symbiont, the larvae that hatch from those eggs are unable to develop normally. The research group, which included Judith Becerra, a chemical ecologist in the UA’s department of ecology and evolutionary biology also affiliated with Biosphere 2, set out to investigate what tactics the wasps might use to overcome the aphids’ symbiont defense strategy.

They found that wasps that laid two eggs in aphids infected with the bacterium and the phage were much more successful at producing live offspring.

However, laying two eggs in uninfected hosts had little effect on the number of surviving wasps as only one wasp can complete development in each aphid. This suggests that having twice the amount of factors secreted by the developing wasp overpowers the protection due to bacterial infection, and is an adaption to ensure the survival of one wasp at the cost of two.

“The protection of the aphids is very tightly correlated with the presence of the bacteriophage,” Hunter said. “The phage genes encode one or another of different toxins, and we think those toxins have more of an effect on the wasp than on the aphid. The aphids depend on the phage for those defense toxins, and the phage depend on the bacteria that they infect. If the phage is absent, the aphid is not protected against the wasps.”

As if that wasn’t enough to wow any observer of the unassuming tiny aphids fighting it out with the equally unassuming tiny wasps, the research team found that the wasps are able to work out which aphids are harboring the symbionts and which are not.

“They can tell if the aphid is protected by a bacterial symbiont and will act to overcome the bacterial defenses,” Hunter said.

“We discovered that the wasp would preferentially lay two eggs in infected hosts, and a single egg if the aphids were unprotected,” said Kerry Oliver, who led the study while he was a postdoctoral fellow in Hunter’s lab. He is now an assistant professor at the university of Georgia’s College of Agriculture and Environmental Sciences.

“We don’t know for sure how wasps discriminate, but when we looked for differences between the aphids, we found that infected aphids produced less of the compound trans-b-farnesene. This compound is a major component of aphid alarm pheromone and wasps are known to use this cue to find hosts.”

“Aphids secrete this alarm pheromone when they’re attacked,” Hunter explained. “They’re usually surrounded by closely related individuals, even clones, and when they perceive this chemical alarm call, they drop to the ground or take another course of action to escape from a threat.”

Whatever the trick they are using to work out which aphids are infected, wasps appear to be able to lay just enough eggs to stay ahead in the arms race.

“The fact that the phage provides the toxin that protects the aphid against the wasps means that the bacteria depend on the phage for their own survival,” Hunter said. “After all, if the aphid goes down, so do the bacteria. The relationships among those different players really do remind us of a set of Russian dolls.”