Russia to Restore Naval Presence in All Oceans 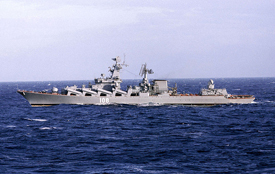 “Unfortunately, the reality is that a number of our previous opportunities have disappeared,” Medvedev said. Medvedev said that he now had “certain ideas” about how these could be replaced. “But for obvious reasons, I will not say them out loud,” he added.

First and foremost, it goes about support points for Russian vessels on the territory of foreign countries. It is necessary to build such objects to support Russia’s military presence in strategically important parts of the globe.

According to the president, it is very expensive and inefficient to send support vessels along with combat ships. “At this point, our foreign partners enjoy better conditions because they organized many bases in different parts of the world, where thy can stop and fuel their vessels. In general, this subject requires attentive participation of the state,” the president said.

First and foremost, it goes about the USA, as well as Great Britain and France – the countries that preserve military presence in all oceans.

The USSR had an extensive network of foreign naval bases and technical support points. The nation had such bases in 16 countries of the globe. It goes about Cuba, Egypt, Algeria, Syria, Ethiopia, Yemen, Angola, Guinea, Libya, Tunisia, Yugoslavia and Vietnam.

The above-mentioned bases guaranteed the USSR’s naval presence in critically important regions of the globe, where the country was competing with the United States. In addition, the bases allowed to support Soviet allies during the moments when the USA tried to put pressure on them.

Nearly all of them were liquidated as a result of the collapse of the Soviet Union, because the new Russian administration believed that it would be extremely expensive for the country to maintain them. Naval bases in Vietnam and Cuba were shut down just several years ago.

Konstantin Sivkov, an expert with the Academy for Geopolitical Problems, believes that opening new naval bases in foreign countries is a noble initiative that Russia needs to pursue.

“Naval bases ensure influence for this or that country in strategically important regions of the globe. During the Soviet era, we had constant presence in all oceans. It is not that hard to restore those bases, because many of the old bases were put in dead storage. The problem is different: the Russian Pacific Navy has been considerably cut, and Russia does not have considerable resources to both defend its shores and open new naval bases,” the expert said.

Where will new Russian military objects appear? The most likely destinations are Vietnam, Syria and Algeria. It is not ruled out that Russian Latin American allies will offer their bases for the Russian navy as well.

*The post is written by – Sergey Balmasov
*Source: Pravda