Rocket powered by nuclear fusion could send humans to Mars

Human travel to Mars has long been the unachievable dangling carrot for space programs. Now, astronauts could be a step closer to our nearest planetary neighbor through a unique manipulation of nuclear fusion, the same energy that powers the sun and stars.

University of Washington researchers and scientists at a Redmond-based space-propulsion company are building components of a fusion-powered rocket aimed to clear many of the hurdles that block deep space travel, including long times in transit, exorbitant costs and health risks.

“Using existing rocket fuels, it’s nearly impossible for humans to explore much beyond Earth,” said lead researcher John Slough, a UW research associate professor of aeronautics and astronautics. “We are hoping to give us a much more powerful source of energy in space that could eventually lead to making interplanetary travel commonplace.” 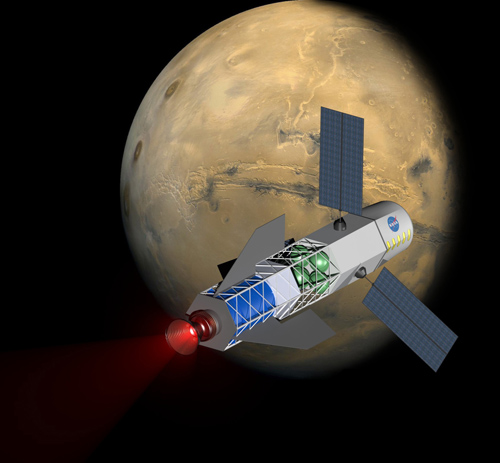 A concept image of a spacecraft powered by a fusion-driven rocket. In this image, the crew would be in the forward-most chamber. Solar panels on the sides would collect energy to initiate the process that creates fusion. Image credit: University of Washington, MSNW

The project is funded through NASA’s Innovative Advanced Concepts Program. Last month at a symposium, Slough and his team from MSNW, of which he is president, presented their mission analysis for a trip to Mars, along with detailed computer modeling and initial experimental results. Theirs was one of a handful of projects awarded a second round of funding last fall after already receiving phase-one money in a field of 15 projects chosen from more than 700 proposals.

NASA estimates a round-trip human expedition to Mars would take more than four years using current technology. The sheer amount of chemical rocket fuel needed in space would be extremely expensive – the launch costs alone would be more than $12 billion.

Slough and his team have published papers calculating the potential for 30- and 90-day expeditions to Mars using a rocket powered by fusion, which would make the trip more practical and less costly.

But is this really feasible?

Slough and his colleagues at MSNW think so. They have demonstrated successful lab tests of all portions of the process. Now, the key will be combining each isolated test into a final experiment that produces fusion using this technology, Slough said.

The research team has developed a type of plasma that is encased in its own magnetic field. Nuclear fusion occurs when this plasma is compressed to high pressure with a magnetic field. The team has successfully tested this technique in the lab. 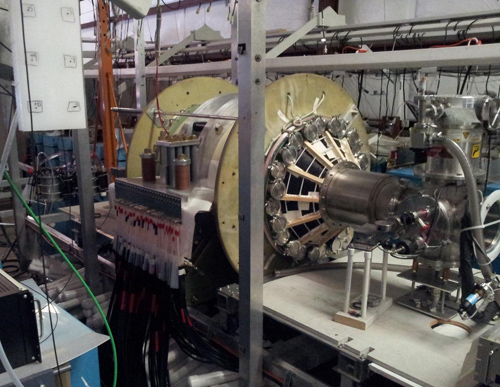 The fusion driven rocket test chamber at the UW Plasma Dynamics Lab in Redmond. The green vacuum chamber is surrounded by two large, high-strength aluminum magnets. These magnets are powered by energy-storage capacitors through the many cables connected to them. Image credit: University of Washington, MSNW

Only a small amount of fusion is needed to power a rocket – a small grain of sand of this material has the same energy content as 1 gallon of rocket fuel.

To power a rocket, the team has devised a system in which a powerful magnetic field causes large metal rings to implode around this plasma, compressing it to a fusion state. The converging rings merge to form a shell that ignites the fusion, but only for a few microseconds. Even though the compression time is very short, enough energy is released from the fusion reactions to quickly heat and ionize the shell. This super-heated, ionized metal is ejected out of the rocket nozzle at a high velocity. This process is repeated every minute or so, propelling the spacecraft.

In the video below, the plasma (purple) is injected while lithium metal rings (green) rapidly collapse around the plasma, creating fusion.

The UW-MSNW team has successfully demonstrated the metal-crushing process in the UW Plasma Dynamics Laboratory in Redmond. The video below, taken from a 3-D computer simulation, shows three lithium rings as they collapse around plasma material.

The team had a sample of the collapsed, fist-sized aluminum ring resulting from one of those tests on hand for people to see and touch at the recent NASA symposium.

“I think everybody was pleased to see confirmation of the principal mechanism that we’re using to compress the plasma,” Slough said. “We hope we can interest the world with the fact that fusion isn’t always 40 years away and doesn’t always cost $2 billion.”

Now, the team is working to bring it all together by using the technology to compress the plasma and create nuclear fusion. Slough hopes to have everything ready for a first test at the end of the summer.

The Plasma Dynamics Lab – where Slough and colleagues, including UW graduate students, build and conduct experiments – is filled wall-to-wall with blue capacitors that hold energy, each functioning like a high-voltage battery. The capacitors are hooked up to a giant magnet that houses the chamber where the fusion reaction will take place. With the flip of a switch, the capacitors are simultaneously triggered to deliver 1 million amps of electricity for a fraction of a second to the magnet, which quickly compresses the metal ring.

The mechanical process and equipment used are reasonably straightforward, which Slough said supports their design working in space.

“Anything you put in space has to function in a fairly simple manner,” he said. “You can extrapolate this technology to something usable in space.”

In actual space travel, scientists would use lithium metal as the crushing rings to power the rocket. Lithium is very reactive, and for lab-testing purposes, aluminum works just as well, Slough said.

Nuclear fusion may draw concern because of its application in nuclear bombs, but its use in this scenario is very different, Slough said. The fusion energy for powering a rocket would be reduced by a factor of 1 billion from a hydrogen bomb, too little to create a significant explosion. Also, Slough’s concept uses a strong magnetic field to contain the fusion fuel and guide it safely away from the spacecraft and any passengers within.