A new study in Proceedings of the National Academy of Sciences suggests that the way carbon moves from within a planet to the surface plays a big role in the evolution of a planet’s atmosphere. If Mars released much of its carbon as methane, for example, it might have been warm enough to support liquid water.

PROVIDENCE, R.I. [Brown University] — A new study of how carbon is trapped and released by iron-rich volcanic magma offers clues about the early atmospheric evolution on Mars and other terrestrial bodies.

The composition of a planet’s atmosphere has roots deep beneath its surface. When mantle material melts to form magma, it traps subsurface carbon. As magma moves upward toward the surface and pressure decreases, that carbon is released as a gas. On Earth, carbon is trapped in magma as carbonate and degassed as carbon dioxide, a greenhouse gas that helps Earth’s atmosphere trap heat from the sun. But how carbon is transferred from underground to the atmosphere in other planets — and how that might influence greenhouse conditions — wasn’t well understood.

“We know carbon goes from the solid mantle to the liquid magma, from liquid to gas and then out,” said Alberto Saal, professor of geological sciences at Brown and one of the study’s authors. “We want to understand how the different carbon species that are formed in the conditions that are relevant to the planet affect the transfer.” 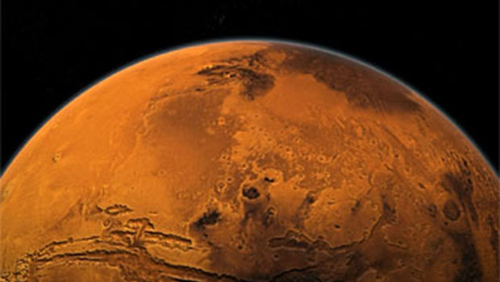 Greenhouse effect on the Red Planet? Early on, Mars had giant active volcanoes, which would have released significant methane. Because of methane’s high greenhouse potential, even a thin atmosphere might have supported liquid water. Image credit: NASA

This latest study, which also included researchers from Northwestern University and the Carnegie Institution of Washington, indicated that under conditions like those found in the mantles of Mars, the Moon and other bodies, carbon is trapped in the magmas mainly as a species called iron carbonyl and released as carbon monoxide and methane gas. Both gasses, methane especially, have high greenhouse potential.

The findings, published in the Proceedings of the National Academy of Sciences, suggest that when volcanism was widespread early in Mars’ history, it may have released enough methane to keep the planet significantly warmer than it is today.

A key difference between conditions in Earth’s mantle and the mantles of other terrestrial bodies is what scientists refer to as oxygen fugacity, the amount of free oxygen available to react with other elements. Earth’s mantle today has a relatively high oxygen fugacity, but in bodies like the Moon and early Mars, it is very low. To find out what how that lower oxygen fugacity affects carbon transfer, the researchers set up a series of experiments using volcanic basalt similar to those found on the Moon and Mars.

They melted the volcanic rock at varying pressures, temperature, and oxygen fugacities, using a powerful spectrometer to measure how much carbon was absorbed by the melt and in what form. They found that at low oxygen fugacities, carbon was trapped as iron carbonyl, something previous research hadn’t detected. At lower pressures, iron carbonyl degassed as carbon monoxide and methane.

“We found that you can dissolve in the magma more carbon at low oxygen fugacity than what was previously thought,” said Diane Wetzel, a Brown graduate student and the study’s lead author. “That plays a big role in the degassing of planetary interiors and in how that will then affect the evolution of atmospheres in different planetary bodies.”

Early in its history, Mars was home to giant active volcanoes, which means significant amounts of methane would have been released by carbon transfer. Because of methane’s greenhouse potential, which is much higher than that of carbon dioxide, the findings suggest that even a thin atmosphere early in Mars’ history might have created conditions warm enough for liquid water on the surface.

Other authors on the paper were Malcolm Rutherford from Brown, Steven Jacobsen from Northwestern. and Erik Hauri from the Carnegie Institution. The work was supported by NASA, the National Science Foundation, the David and Lucile Packard Foundation, and the Deep Carbon Observatory.