Robots Fighting Wars Could Be Blamed For Mistakes on The Battlefield

As militaries develop autonomous robotic warriors to replace humans on the battlefield, new ethical questions emerge. If a robot in combat has a hardware malfunction or programming glitch that causes it to kill civilians, do we blame the robot, or the humans who created and deployed it?

Some argue that robots do not have free will and therefore cannot be held morally accountable for their actions. But psychologists at the University of Washington are finding that people don’t have such a clear-cut view of humanoid robots.

The researchers’ latest results show that humans apply a moderate amount of morality and other human characteristics to robots that are equipped with social capabilities and are capable of harming humans. In this case, the harm was financial, not life-threatening. But it still demonstrated how humans react to robot errors.

The findings imply that as robots become more sophisticated and humanlike, the public may hold them morally accountable for causing harm.

“We’re moving toward a world where robots will be capable of harming humans,” said lead author Peter Kahn, a UW associate professor of psychology. “With this study we’re asking whether a robotic entity is conceptualized as just a tool, or as some form of a technological being that can be held responsible for its actions.” 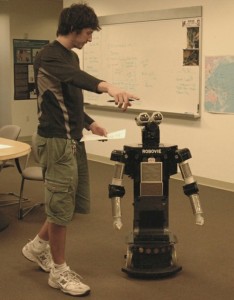 Arguing with Robovie over the robot's mistake while playing a game. Image credit: HINTS lab, UW

The paper was recently published in the proceedings of the International Conference on Human-Robot Interaction.

In the study, Kahn and his research team had 40 undergraduate students play a scavenger hunt with a humanlike robot, Robovie. The robot appeared autonomous, but it was remotely controlled by a researcher concealed in another room.

After a bit of small talk with the robot, each participant had two minutes to locate objects from a list of items in the room. They all found the minimum, seven, to claim the $20 prize. But when their time was up, Robovie claimed they had found only five objects.

Then came the crux of the experiment: participants’ reactions to the robot’s miscount.

“Most argued with Robovie,” said co-author Heather Gary, a UW doctoral student in developmental psychology. “Some accused Robovie of lying or cheating.”

(Watch a video of one of the participants disagreeing with Robovie.)

When interviewed, 65 percent of participants said Robovie was to blame – at least to a certain degree – for wrongly scoring the scavenger hunt and unfairly denying the participants the $20 prize.

This suggests that as robots gain capabilities in language and social interactions, “it is likely that many people will hold a humanoid robot as partially accountable for a harm that it causes,” the researchers wrote.

They argue that as militaries transform from human to robotic warfare, the chain of command that controls robots and the moral accountability of robotic warriors should be factored into jurisprudence and the Laws of Armed Conflict for cases when the robots hurt humans.

Kahn is also concerned about the morality of robotic warfare, period. “Using robotic warfare, such as drones, distances us from war, can numb us to human suffering, and make warfare more likely,” he said.