Julie Hunter and the Beat of A Different Drum

Cultural taboos have long kept Ghanaian women away from drumming. But two significant political movements began to break down those barriers in the last 60 years, bringing women into the musical fold. It is that shift — and its political, social, and cultural implications — that Julie Hunter studied to earn her Ph.D. this spring.

Drumming has always been an important part of Ghanaian culture. Long a genre reserved for ceremonial occasions, drumming became increasingly secularized after the Gold Coast claimed independence in 1957. That postcolonial period, followed by a national women’s movement in the 1980s made the culture ripe for political and social change. In this climate, drumming, once strictly reserved for men, has been adopted by women, marking a significant shift in gender roles within Ghanaian culture. It is this shift that Julie Hunter studied to write her thesis, “The Rise of Women’s Drumming in Africa: Performing Gender and Transforming Community in Southeastern Ghana.” Hunter will earn her Ph.D. in ethnomusicology this spring.

Although the culture has been undergoing dramatic change for the last six decades, it was an innovative group of Ewe women that expanded the practice of drumming into female territory. Seeking their own way of representing the ideals of the 31st December Women’s Movement, they formed a drumming group, known in the Ewe language as habobos. But in doing so they unwittingly stood a long-standing tradition on its head, opening the door for other all-female habobos to form. Eventually, other groups started popping up around the country, breaking down barriers and shattering a long-held taboo defining drumming as a male-only activity.

Hunter has long been interested in Ghanaian music. A drummer herself, some initial research revealed that little has been written about female musicians in West Africa, a finding that inspired the topic of her thesis. 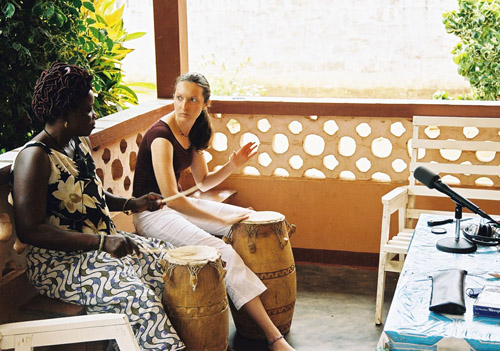 Where better to learn the art and significance of drumming? A drummer herself, Julie Hunter did much of her thesis research in Ghana, using the rise of women drummers as a lens to study historical, social, cultural and gender-role change. Image credit: Brown University

“I really wanted to focus on the performers’ lives,” Hunter said. “The scholarship up to now focuses on music as a product rather than a process, and few studies have adopted a thorough ethnographic approach to describing the performance and music.”

It was on a pre-dissertation research trip to Ghana where, by chance, the Montpelier, Vt., native stumbled upon the what would become the lens through which she’d write her thesis. Watching a newscast at a friend’s apartment, she happened to catch a segment about that first all-female group, called Kpegisu Habobo, that formed during the women’s movement in the 1980s. On a return trip to Ghana, she met the group and began interviewing the women for her thesis.

The Sounds of Change

Drumming in Ghana, a tradition as deep-rooted as the musicians themselves, was for centuries a taboo activity for women. Long a practice reserved for men, drums were seen as sacred and having spiritual power and it was believed that women’s menstruation would negatively affect the instruments. 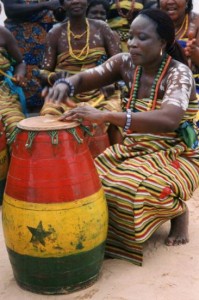 A decidedly different drummer. Drumming, among the core elements of life in Ghana, was historically the province of men. As Ghanaian culture changed in the postcolonial era, so did the drummers. Image credit: Brown University

But in the postcolonial period, the role of drumming in Ghana began to change, gradually undergoing a re-contextualization of traditions where drumming was seen as less of a sacred activity and more of a secularized one to be enjoyed in a variety of settings, including schools, universities, and urban folkloric ensembles.

The formation of the Kpegisu Habobo brought a major change as well. Women, who had long performed at funerals, festivals, installations of chiefs, and religious ceremonies as dancers and singers, were now drumming at the ceremonies as well. Perhaps more significantly, increased exposure has elevated the status of the Kpegisu Habobo, and the group has been invited to many prominent performance events throughout the country, including the annual National Festival of Arts and Culture in Ghana, and the funerals of heads of state.

Hunter found that the significance of this goes well beyond the act of playing music. It’s representative of how Ghanaian women are using their gender to remake tradition. “Women perform as a strategic move used to re-imagine and transform their traditions and community. They view music-making as a responsibility that individuals should fulfill in order to contribute to the improvement of their communities,” Hunter said.

Hunter began her thesis research in 2003 and has since taken three trips to Ghana. So intrigued was she by her research, that she plans to return to the West African country this summer to continue, hoping to eventually turn her findings into a book.

Amidst writing, she works as a lecturer in the Music Department at Boston College, where she teaches classes on the music of Africa and other cultures around the world. At Brown, Hunter worked with Martin Kwaku Kwaakye Obeng’s Ghanaian Drumming and Dancing Ensemble for several years, and helped to organize an African music festival in 2008.