*The Gulf and southern Atlantic coasts will be particularly hard hit, research predicts. Miami, New Orleans, Tampa, Fla., and Virginia Beach, Va. could lose more than 10 percent of their land area by 2100*

Rising sea levels could threaten an average of 9 percent of the land within 180 U.S. coastal cities by 2100, according to new research led by University of Arizona scientists.

The Gulf and southern Atlantic coasts could be particularly hard hit. Miami, New Orleans, Tampa, Fla., and Virginia Beach, Va. could lose more than 10 percent of their land area by 2100.

The research is the first analysis of vulnerability to sea-level rise that includes every U.S. coastal city in the lower 48 with a population of 50,000 or more.

The latest scientific projections indicate that by 2100, the sea level will rise about 1 meter – or even more. One meter is about 3 feet.

At the current rate of global warming, sea level is projected to continue rising after 2100 by as much as 1 meter per century. 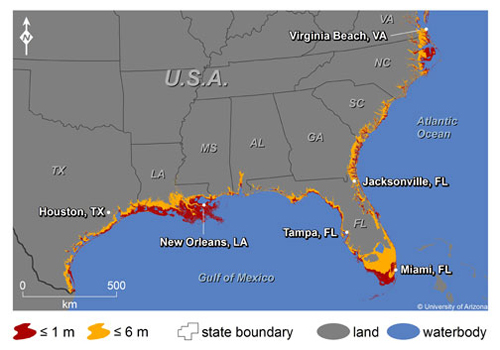 This map shows where increases in sea level could affect the southern and Gulf coasts of the U.S. The colors indicate areas along the coast that are elevations of 1 meter or less (russet) or 6 meters or less (yellow) and have connectivity to the sea. Image credit: Jeremy Weiss, University of Arizona

“According to the most recent sea-level-rise science, that’s where we’re heading,” said lead researcher Jeremy L. Weiss, a senior research specialist in the UA’s department of geosciences. “Impacts from sea-level rise could be erosion, temporary flooding and permanent inundation.”

The coastal municipalities the team identified had 40.5 million people living in them, according to the 2000 U.S. Census. Twenty of those cities have more than 300,000 inhabitants.

Weiss and his colleagues examined how much land area from the 180 municipalities could be affected by 1 to 6 meters of sea-level rise. 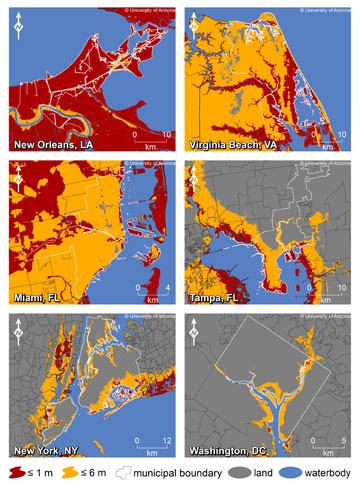 This map shows where increases in sea level could affect New Orleans, Virginia Beach, Va., Miami, Tampa, Fla., New York and Washington, D.C. The colors indicate areas along the coast that are elevations of 1 meter or less (russet) or 6 meters or less (yellow) and have connectivity to the sea. Image credit: Jeremy Weiss, University of Arizona

“With the current rate of greenhouse gas emissions, the projections are that the global average temperature will be 8 degrees Fahrenheit warmer than present by 2100,” said Weiss, who is also a UA doctoral candidate in geosciences.

“That amount of warming will likely lock us into at least 4 to 6 meters of sea-level rise in subsequent centuries, because parts of the Greenland and Antarctic ice sheets will slowly melt away like a block of ice on the sidewalk in the summertime.”

“Our work should help people plan with more certainty and to make decisions about what level of sea-level rise, and by implication, what level of global warming, is acceptable to their communities and neighbors,” said co-author Jonathan T. Overpeck, a UA professor of geosciences and of atmospheric sciences and co-director of UA’s Institute of the Environment.

Weiss, Overpeck and Ben Strauss of Climate Central in Princeton, N.J., will publish their paper, “Implications of Recent Sea Level Rise Science for Low-Elevation Areas in Coastal Cities of the Conterminous U.S.A.,” in Climatic Change Letters. The paper is scheduled to go online this week.

Weiss and Overpeck had previously developed maps of how increases in sea level could affect the U.S. coastline. Strauss suggested adding the boundaries of municipalities to focus on how rising seas would affect coastal towns and cities.

For the detailed maps needed for the new project, the researchers turned to the National Elevation Dataset produced by the U.S. Geological Survey. The NED provides a high-resolution digital database of elevations for the entire U.S.

The high resolution let Weiss and his colleagues identify the elevation of a piece of land as small as 30 meters (about 100 feet) on a side – about the size of an average house lot.

The researchers used the USGS database to create detailed digital maps of the U.S. coast that delineate what areas could be affected by 1 meter to 6 meters of sea-level rise. The researchers also added the boundaries for all municipalities with more than 50,000 people according to the 2000 U.S. Census.

To increase the accuracy of their maps, the team included all pieces of land that had a connection to the sea and excluded low-elevation areas that had no such connection. Rising seas do not just affect oceanfront property – water moves inland along channels, creeks, inlets and adjacent low-lying areas.

“Ours is the first national-scale data set that delineates these low-lying coastal areas for the entire lower 48 at this degree of spatial resolution,” Weiss said.

Overpeck said, “The main point of our work is to give people in our coastal towns and cities more information to work with as they decide how to deal with the growing problem of sea-level rise.”