An archeologist at Washington University in St. Louis is helping to reveal for the first time a snapshot of rural life in China during the Han Dynasty.

The rural farming village of Sanyangzhuang was flooded by silt-heavy water from the Yellow River around 2,000 year ago.

Working with Chinese colleagues, T.R. Kidder, PhD, professor and chair of anthropology in Arts & Sciences, is working to excavate the site, which offers an exceptionally well-preserved view of daily life in Western China more than 2,000 years ago.

The research was presented at the Society for American Archeology meeting in St. Louis is April and highlighted in Science, the journal of the American Association for the Advancement of Science.

“It’s an amazing find,” says Kidder of the site, which was discovered in 2003. “We are literally sitting on a gold mine of archeology that is untapped.” 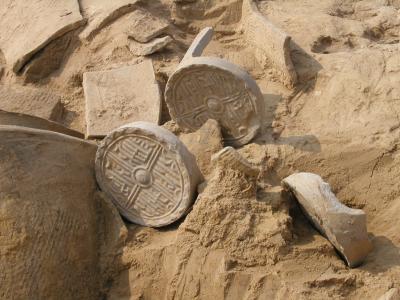 About the image above: These are Sanyangzhuang tiles set aside to repair a Han house. Image credit: Henan Provincial Institute of Cultural Relics and Archaeology.

What researchers find fascinating and surprising, says Kidder, is that the town, though located in a remote section of the Han Dynasty kingdom, appears quite well off.

There is an abundance of metal tools, including plow shares, as well as grinding stones and coins. Also found have been fossilized impressions of mulberry leaves, which researchers see as a sign of silk cultivation. 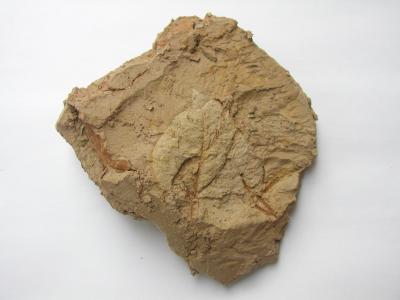 About the image above: This is an impression of a mulberry leave, a sign of silk cultivation, found at the Sanyangzhuang site. Image credit: Henan Provincial Institute of Cultural Relics and Archaeology.

“One could make the argument that this is where the Silk Road began,” Kidder says.

He thinks the site could be substantially larger than is currently known. The flood of sediment that buried the town also covered an area of more than 1,800 square kilometers.

Excavation has revealed two more buried communities beneath Sanyangzhuang. “This sedimentary archive goes to all the way back to the Pleistocene era,” says Kidder, who has experience digging in silt-laden sites near the Mississippi River.

“We have a text written in dirt of environmental change through time that’s associated with the flooding of the Yellow River and its environmental relationships. We have an opportunity to examine an entire landscape dating from the Han and periods before,” he says.

Excavated remains of a wall near the site could reveal a walled town, which is still buried in the silt.