The Colorado River provides water for more than 30 million people in the U.S. West, so water managers have been eager to understand how climate change will affect the river’s flow. But scientific studies have produced an unsettling range of estimates, from a modest decrease of 6 percent by 2050 to a steep drop of 45 percent by then.

A new paper by researchers at the University of Washington (UW), CIRES, NOAA and other institutions across the West investigates and explains why those estimates differ and summarizes what is known about the future of this iconic Western river—key information for decision makers.

“We know, for example, that warmer temperatures will lead to more evaporation and less flow,” said co-author Bradley Udall, who contributed to the study as director of the CIRES Western Water Assessment, a NOAA-funded program at the University of Colorado Boulder. Udall is now director of CU-Boulder’s Getches-Wilkinson Center for Natural Resources, Energy and Environment at Colorado Law. “Although projections of future precipitation aren’t as clear, it’s likely that we’re going to see a reduction in overall flow in the Colorado,” Udall said.

The study is published this week in the Bulletin of the American Meteorological Society.

While the paper does not narrow the existing range of estimates, it provides context for evaluating the current numbers. The 6 percent reduction estimate, for example, did not include some newer climate model runs, which tend to predict a drier West. And the 45 percent decrease estimate relied on models with a coarse spatial resolution that could not capture the effects of topography in the headwater regions. The new analysis, thus, supports more moderate estimates of changes in future flows.

“The different estimates have led to a lot of frustration,” said lead author Julie Vano, who recently earned a UW doctorate in civil and environmental engineering. “This paper puts all the studies in a single framework and identifies how they are connected.” 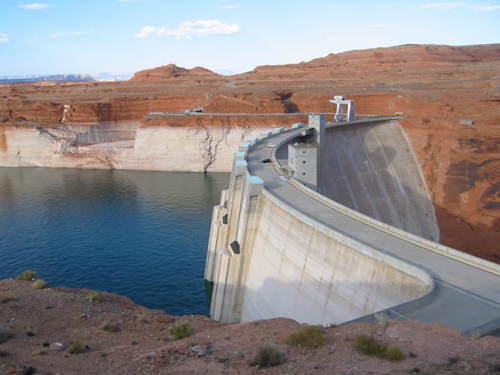 Glen Canyon Dam and Lake Powell at a low point in 2004, when the Colorado River reservoir was only about 40 percent of capacity. A new study with CIRES co-authors evaluates why estimates of the river’s future flow vary, from a 6 percent decrease by 2050 to 45 percent. (Photo by co-author Bradley Udall, who contributed to the new study as director of the CIRES Western Water Assessment, a NOAA-funded program of the University of Colorado Boulder.)

In evaluating recent scientific papers that estimate future flow of the Colorado River, she and her co-authors identified several reasons for different flow estimates. Among them are differences in:

The new paper also highlights several important realities faced by Western water managers reliant on Colorado River flows. The early 20th century, for example, is the basis for water allocation in the basin, but was a period of unusually high flow, so Colorado River water is already overallocated. Moreover, tree ring records suggest that the Colorado has experienced severe droughts in the past and will do so again, even without any human-caused climate change. If exacerbated by steadily decreasing flows due to climate change, such a “megadrought” could result in decades of extremely low streamflow, much lower than observed in the last century.

Paper authors include leaders in Western water issues, ranging from specialists in atmospheric sciences to hydrology to paleoclimate: Bradley Udall at CIRES’s Western Water Assessment and the University of Colorado Boulder; Daniel Cayan, Tapash Das and Hugo Hidalgo at the University of California, San Diego; Jonathan Overpeck, Holly Hartmann and Kiyomi Morino at the University of Arizona in Tucson; Levi Brekke at the U.S. Bureau of Reclamation; Gregory McCabe at the U.S. Geological Survey in Denver; Robert Webb and Martin Hoerling at the NOAA Earth System Research Laboratory in Boulder; and Kevin Werner at the National Weather Service in Salt Lake City.

CIRES is the Cooperative Institute for Research in Environmental Sciences, a joint institute of CU-Boulder and NOAA.