UW research: World population could be nearly 11 billion by 2100

A new statistical analysis shows the world population could reach nearly 11 billion by the end of the century, according to a United Nations report issued June 13. That’s about 800 million, or about 8 percent, more than the previous projection of 10.1 billion, issued in 2011.

The projected rise is mostly due to fertility in Africa, where the U.N. had expected birth rates to decline more quickly than they have.

“The fertility decline in Africa has slowed down or stalled to a larger extent than we previously predicted, and as a result the African population will go up,” said Adrian Raftery, a University of Washington professor of statistics and of sociology.

The current African population is about 1.1 billion and it is now expected to reach 4.2 billion, nearly a fourfold increase, by 2100.

The new U.N. estimates use statistical methods developed by Raftery and his colleagues at the UW Center for Statistics and the Social Sciences. The group’s improved fertility forecasting methods, combined with updated data collected by the U.N., were used to project the long-term consequences of the fertility change in Africa since the last population estimate two years ago.

New to this year’s projection are finer-tuned statistics that anticipate the life expectancies of women and men across this century. 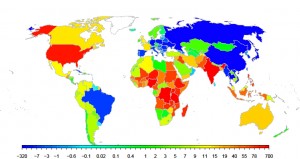 The expected population changes from now to 2100 are shown in the graphic. By far the largest expected increase is in Nigeria, projected to increase by 730 million people, from 184 million now to 914 million in 2100. Eight of the top ten increases are in Africa, with India in second place. The United States is eighth, with an expected increase of 146 million, or 46 percent, from 316 million now to 462 million in 2100. The largest projected decline is in China, expected to decrease by about 300 million, from 1.4 billion now to 1.1 billion in 2100. Image credit: UW Center for Statistics and the Social Sciences (Click image to enlarge)

In other areas of the world, fewer major population changes are expected. Europe may see a small decline because of fertility continuing below replacement level, and other nations around the globe may see modest increases due to longer life expectancies, Raftery said.

There’s no end in sight for the increase of world population, he added, yet the topic has gone off the world’s agenda in favor of other pressing global issues, including poverty and climate – both of which have ties to world population.

“These new findings show that we need to renew policies, such as increasing access to family planning and expanding education for girls, to address rapid population growth in Africa,” Raftery said.

The UN gives high and low variants of its projections, assuming that women have an average of half a child more or less than the best projection. That leaves a large uncertainty, from 7 billion to nearly 17 billion, in the range for potential world population by the end of this century.

By contrast, the UW research group has developed probabilities of future population levels to be coupled with best forecasts. “Our probability intervals are much tighter, ranging from 9 billion to 13 billion in 2100,” Raftery said.