When it comes to honey bees, more mates is better. A new study from North Carolina State University, the University of Maryland and the U.S. Department of Agriculture (USDA) shows that genetic diversity is key to survival in honey bee colonies – a colony is less likely to survive if its queen has had a limited number of mates.

“We wanted to determine whether a colony’s genetic diversity has an impact on its survival, and what that impact may be,” says Dr. David Tarpy, an associate professor of entomology at North Carolina State University and lead author of a paper describing the study. “We knew genetic diversity affected survival under controlled conditions, but wanted to see if it held true in the real world. And, if so, how much diversity is needed to significantly improve a colony’s odds of surviving.” 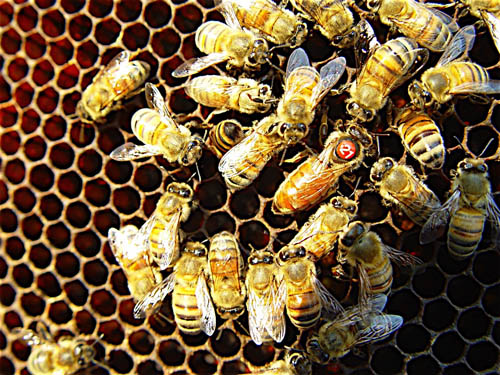 Tarpy took genetic samples from 80 commercial colonies of honey bees (Apis mellifera) in the eastern United States to assess each colony’s genetic diversity, which reflects the number of males a colony’s queen has mated with. The more mates a queen has had, the higher the genetic diversity in the colony. The researchers then tracked the health of the colonies on an almost monthly basis over the course of 10 months – which is a full working “season” for commercial bee colonies.

The researchers found that colonies where the queen had mated at least seven times were 2.86 times more likely to survive the 10-month working season. Specifically, 48 percent of colonies with queens who had mated at least seven times were still alive at the end of the season. Only 17 percent of the less genetically diverse colonies survived. “48 percent survival is still an alarmingly low survival rate, but it’s far better than 17 percent,” Tarpy says.

“This study confirms that genetic diversity is enormously important in honey bee populations,” Tarpy says. “And it also offers some guidance to beekeepers about breeding strategies that will help their colonies survive.” 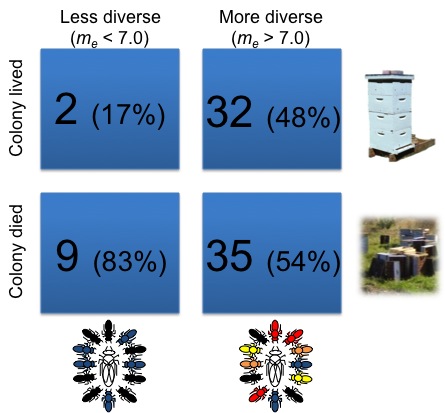 Bee colony survival is linked to the number of times a queen has mated. Image credit: David Tarpy

The paper, “Genetic diversity affects colony survivorship in commercial honey bee colonies,” was published online this month in the journal Naturwissenschaften. Co-authors of the study are Dr. Dennis vanEngelsdorp of the University of Maryland and Dr. Jeffery Pettis of USDA. The work was supported by the USDA Cooperative State Research, Education and Extension Service, the USDA Agricultural Research Service, the North Carolina Department of Agriculture and Consumer Services and the National Honey Board.