COLUMBIA, Mo. – Americans, on average, replace their mobile phones every 22 months, junking more than 150 million phones a year in the process. When it comes to recycling and processing all of this electronic waste, the World Health Organization reports that even low exposure to the electronic elements can cause significant health risks. Now, University of Missouri researchers are on the path to creating biodegradable electronics by using organic components in screen displays. The researchers’ advancements could one day help reduce electronic waste in the world’s landfills. 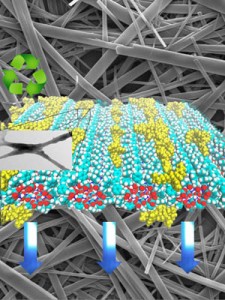 The illustration shows a theoretical simulation of the distribution of the polymer on peptide nanotubes and an electron microscopy image of the nanocomposite. Image credit: University of Missouri

“Current mobile phones and electronics are not biodegradable and create significant waste when they’re disposed,” said Suchismita Guha, professor in the Department of Physics and Astronomy at the MU College of Arts and Science. “This discovery creates the first biodegradable active layer in organic electronics, meaning—in principle—we can eventually achieve full biodegradability.”

Guha, along with graduate student Soma Khanra, collaborated with a team from the Federal University of ABC (UFABC) in Brazil to develop organic structures that could be used to light handheld device screens. Using peptides, or proteins, researchers were able to demonstrate that these tiny structures, when combined with a blue light-emitting polymer, could successfully be used in displays.

“These peptides can self-assemble into beautiful nanostructures or nanotubes, and, for us, the main goal has been to use these nanotubes as templates for other materials,” Guha said. “By combining organic semiconductors with nanomaterials, we were able to create the blue light needed for a display. However, in order to make a workable screen for your mobile phone or other displays, we’ll need to show similar success with red and green light-emitting polymers.”

The scientists also discovered that by using peptide nanostructures they were able to use less of the polymer. Using less to create the same blue light means that the nanocomposites achieve almost 85 percent biodegradability. 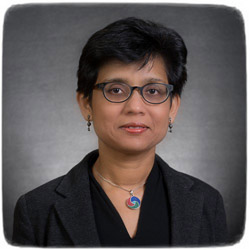 “By using peptide nanostructures, which are 100 percent biodegradable, to create the template for the active layer for the polymers, we are able to understand how electronics themselves can be more biodegradable,” Guha said. “This research is the first step and the first demonstration of using such biology to improve electronics.”

The study “Self-Assembled Peptide-Polyfluorene Nanocomposites for Biodegradable Organic Electronics” recently was published as the inside cover article in Advanced Materials Interfaces. The work was supported by the National Science Foundation (Grant IIA-1339011) and CNPq (400239/2014-0). The content is solely the responsibility of the authors and does not necessarily represent the official views of the funding agencies.

Tommi White, assistant research professor of biochemistry, and Thomas Lam, both with the Microscopy Core Research Facility at MU, contributed to the study. Other collaborators include Wendel A. Alves and Thiago Cipriano, professors of supramolecular chemistry at UFABC; and Eudes E. Fileti, a professor of physics at the Federal University of São Paulo, Brazil.