A North Carolina State University researcher has taken a “snapshot” of the way particles combine to form carbon-12, the element that makes all life on Earth possible. And the picture looks like a bent arm.

Carbon-12 can only exist when three alpha particles, or helium-4 nuclei, combine in a very specific way. This combination is known as the Hoyle state. NC State physicist Dean Lee and German colleagues Evgeny Epelbaum, Hermann Krebs and Ulf-G. Meissner had previously confirmed the existence of the Hoyle state using a numerical lattice that allowed the researchers to simulate how the protons and neutrons interact. When the researchers ran their simulations on the lattice, the Hoyle state appeared together with other observed states of carbon-12, proving the theory correct from first principles.

But they also wanted to find out how the nucleons (the protons and neutrons inside the nucleus of an atom) were arranged inside the nucleus of carbon-12. This would enable them to “see” the structure of the Hoyle state. Using the same lattice, the researchers, along with collaborator Timo Laehde, found that carbon-12’s six protons and six neutrons formed three “alpha clusters” of four nucleons each. At low energy, the alpha clusters tended to clump together in a compact triangular formation. But for the Hoyle state, which is an excited energy state, the three alpha clusters combined in a “bent arm” formation. 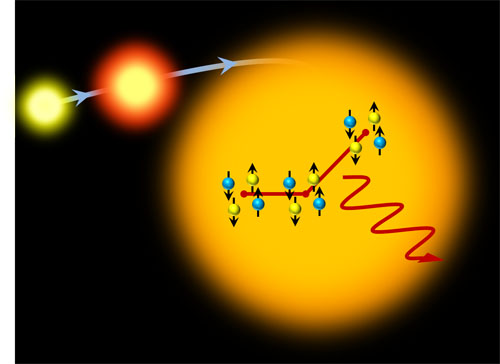 The researchers’ findings will appear this month in Physical Review Letters.

“It’s interesting that a straight chain seems not to be the preferred configuration for the Hoyle state,” Lee says. “A bend in the chain seems necessary. This work leads us to the question of what other nuclei have such alpha cluster shapes. These would be rather exotic structures in nuclear physics and open some really interesting questions regarding shape and stability. For example, can we have longer chains of alpha clusters? We are investigating these possibilities.”

The work was funded by the U.S. Department of Energy; the Deutsche Forschungsgemeinschaft, Helmholtz-Gemeinschaft Deutscher Forschungszentren, and Bundesministerium fuer Bildung und Forschung in Germany; European Union HadronPhysics3 Project and the European Research Council; and the National Natural Science Foundation of China. Computational resources were provided by the Juelich Supercomputing Center. The NC State Department of Physics is part of the College of Physical and Mathematical Sciences.