ANN ARBOR, Mich.— For the first time, scientists have made star-shaped, biodegradable polymers that can self-assemble into hollow, nanofiber spheres, and when the spheres are injected with cells into wounds, these spheres biodegrade, but the cells live on to form new tissue.

Developing this nanofiber sphere as a cell carrier that simulates the natural growing environment of the cell is a very significant advance in tissue repair, says Peter Ma, professor at the University of Michigan School of Dentistry and lead author of a paper about the research scheduled for advanced online publication in Nature Materials. Co-authors are Xiaohua Liu and Xiaobing Jin.

Repairing tissue is very difficult and success is extremely limited by a shortage of donor tissue, says Ma, who also has an appointment at the U-M College of Engineering. The procedure gives hope to people with certain types of cartilage injuries for which there aren’t good treatments now. It also provides a better alternative to ACI, which is a clinical method of treating cartilage injuries where the patient’s own cells are directly injected into the patient’s body. The quality of the tissue repair by the ACI technique isn’t good because the cells are injected loosely and are not supported by a carrier that simulates the natural environment for the cells, Ma says. 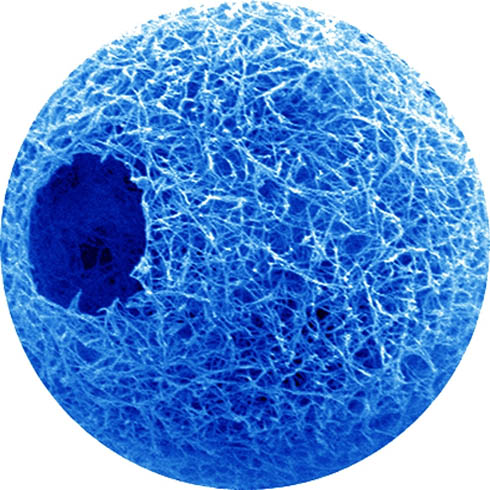 To repair complex or oddly shaped tissue defects, an injectable cell carrier is desirable to achieve accurate fit and to minimize surgery, he says. Ma’s lab has been working on a biomimetic strategy to design a cell matrix—a system that copies biology and supports the cells as they grow and form tissue—using biodegradable nanofibers.

This approach has been more successful than the traditional cell matrix currently used in tissue growth, he says. Until now, there has been no way to make such a matrix injectable so it’s not been used to deliver cells to complex-shaped wounds.

During testing, the nanofiber repair group grew as much as three to four times more tissue than the control group, Ma says. The next step is to see how the new cell carrier works in larger animals and eventually in people to repair cartilage and other tissue types.